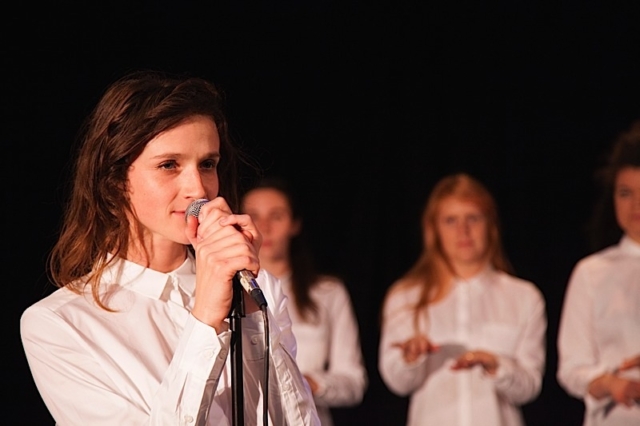 Early Morning Song is a stream-of-conscious writing piece by Rachel Jendrzejewski in which the six female cast members relate the act of archiving one’s life and the study of nature. It is written more like a poem than a conventional play. Dolo McCombs has choreographed the action with effective choral speaking and imaginative formations on the stage using the actress’s movement and placement. The overall look reminded me of humans as digital forms. A chilling prospect.

Paradoxically, the performers are impressively precise and strong, but they convey a muted emotional quality and almost always in isolation. Even when they address one another there is psychic distance between them. One wonders if its saying something about the narcissism of the selfie-based culture we have become and the way in which people communicate less ably than once upon a time. Or might it be about the uniformity that technology worship is leading us toward? Director Steve Busa seems to leave it open to discussion which seems a bit too easy a directorial choice, or lack thereof. Evocative music and sound by Skyler Nowinski.