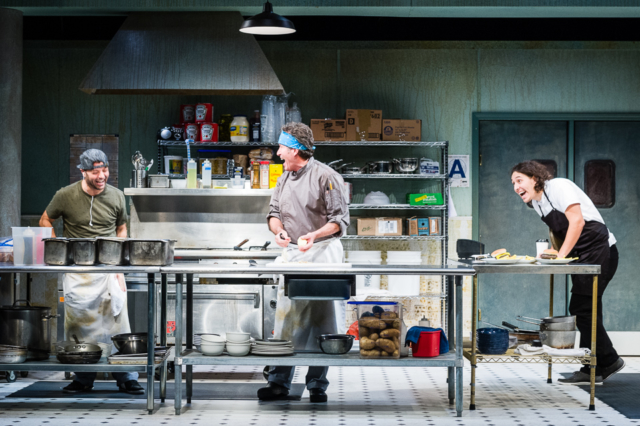 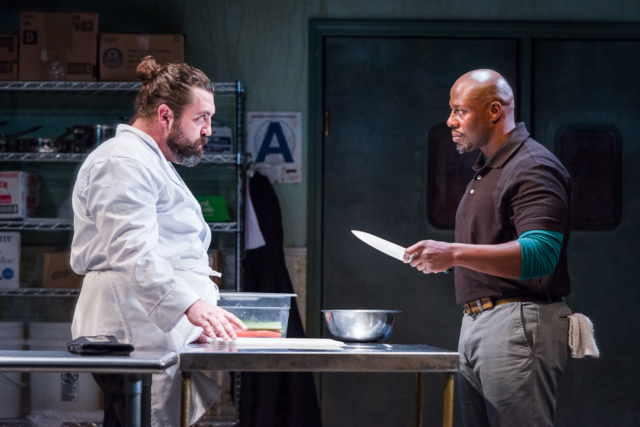 Mixed Blood Theatre is presenting a flawless production of a recent remarkable play that lifts multicultural comedy out of the stereotypes of both right- and left-wing demagoguery. How to Use a Knife by Will Snider is set in a New York restaurant kitchen where a diverse group of men keep its manic operations running. When an overbearing chef named George (Zack Myers) who is half-Puerto Rican and half-Irish is brought in to oversee the work crew, a clash of personalities erupts that you won’t ever see examined in the mainstream media.

As you may expect, the owner is a white male, insensitive to his employees, whether they are documented or not. Michael Booth is perfectly pompous as the careless Michael, a hedonistic player of a man who holds the view that what he doesn’t know won’t hurt him. Therefore, he lives in denial of his illegal employment practices. He also makes catty homophobic comments about the white busboy Jack (Maxwell Collyard). He thinks he has the right to cavalierly insult those he sees as inferior.

The “Knife” in the title refer’s George’s prowess as a chef. He was star caliber in his field but addiction has worn on him and turned him bitterly abusive. It’s hard to imagine a more abrasive person managing workers. That said, his two Guatemalan line cooks can also dish it right back out at him, and do they ever get personal. Back at ya George! Ouch! Their rebuttals make for deliciously devilish wisecracks.

Jack gets our sympathy to an extent because of his struggles as a poor student who can be perceived to some as gay, but he also has his bigoted moments.

Paradoxically, what ensures that How to Use a Knife will become a comedy classic is the a truly dramatic human connection between George and the mysterious African dishwasher, the stealthy Steve (Ansa Akyea). This makes it a comedy that is a laugh a minute, yet it sets you on the edge of your seat while almost breaking your heart at moments. Not to mention it tells blunt truths about employee exploitation with nuance that actually crackles.

Steve is a wall of inner strength in the face of the chaos exacerbated by George’s attitude. This steadiness wins the chef’s respect and actually impels him to open up. We start to see a beautifully vulnerable and intimate friendship develop between the two until…. Well, I won’t spoil it for you. Suffice to say that it shifts into quite a culmination of events.

Myers and Akyea simply astound as opposites. Myers brings grit and fire to what is surely one of the juiciest, meatiest roles in contemporary comedy. His character, George, tests our limits of what’s abusive, what’s crude and coarse, inappropriate, and what’s not. You may go back and forth on where you stand with him. This is what makes this play, on the one hand very human and yet also innately political. So be warned that it will both delight and offend people across the political spectrum.

Akyea brings charismatic poise to Steve. He imbues the role masterfully with a quality that many will deem as spiritual without being sanctimonious. That said, as the play unfolds, the many audience members drawn to his charisma will be in for a surprise.

Another character who isn’t what she seems is the aggressive immigration agent, given a sharp-edged performance by Taous Khazem. On the one hand she seems to be a dreadfully harsh instrument of the system. Her stern tone borders on what seems hateful, yet one can’t help but grant that she is right to pursue the evil she has been tasked to track down.

The Mixed Blood production has been directed by Jesca Prudencio with dynamic timing matched with irreverent wit sprung from actors who feel their characters on a very deep level. The execution of the script into a staged reflection of reality is flawless. Collyard, Jake Caceres, and Raul Ramos give rich supporting performances. They remind us that, alongside the play’s Titanic central duo, their portrayals are nonetheless indispensable to Snider’s audaciously observed social kitchen comedy. 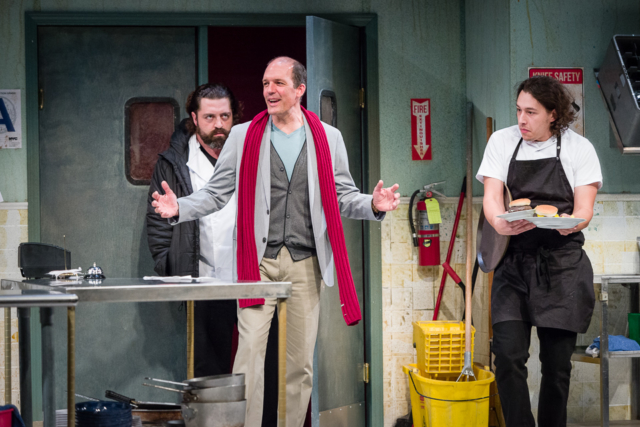