Adorably Zany “Sword of Trust” is Both a Buddy Movie and a Celebration of Lesbian Commitment – Wow!

If you just want to be entertained and escape into a madcap situation that overflows with wackiness, then don’t miss Sword of Trust. Michaela Watkins and Jillian Bell deliver hilarious performances as Mary and Cynthia, a lesbian couple endeavoring to get a good price for an antique sword from the Civil War. Cynthia inherited the weapon from her grandfather, but little do they know that nefarious forces are interested in procuring it—by any means necessary. These two make screen magic as they charm with toughness and warmth.

Bisexual director and co-writer Lynn Shelton adeptly employs her capacity for understanding both a lesbian and a straight perspective through pawn shop owner, Mel (a wonderfully natural Marc Maron), a man tormented by a woman with a history of addiction. That character, Deirdre, is actually played with visceral intensity by Shelton herself. 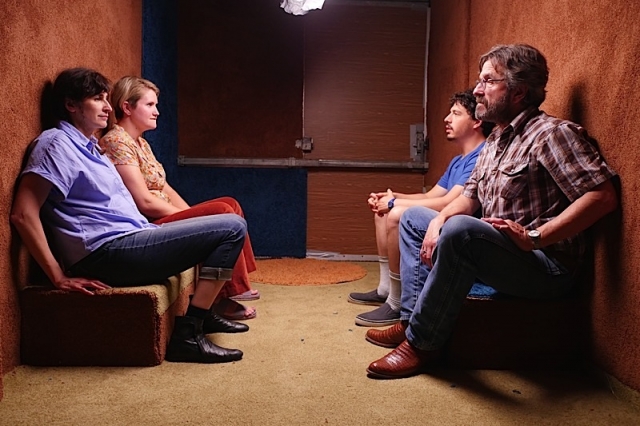 When the lesbian couple, Mel, and Nathaniel, his endearingly goofy assistant, are whisked away to a secret location to seal a shady deal, strange things happen. A secret cabal of closet Confederates of the Old South, holding out 150 years-plus after the “War of Northern Aggression”, discover that these four more enlightened confederates may be more than they bargained for.

Jon Bass’s uproarious Nathaniel is a geek living in his own little universe where computers, tall tales, and conspiracy theories are his total reality. So prepare to be convinced that the Earth is most definitely flat! The scene where Cynthia genuinely tries to understand his reasoning is priceless.  Yes indeed, Sword of Trust is ridiculously silly but by golly, it’s a whole heck of a lot of fun and then some. Shelton co-wrote the screenplay with Michael Patrick O’Brien.