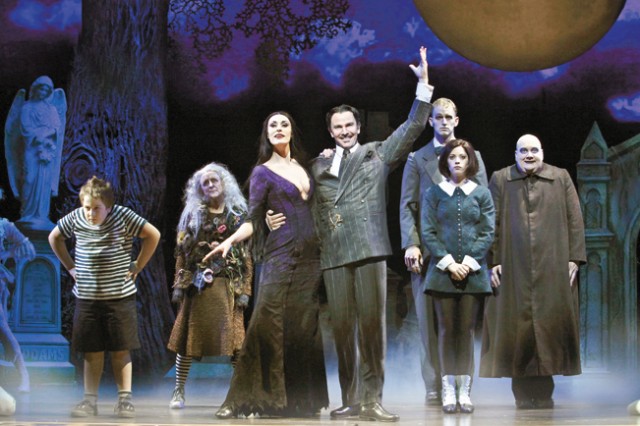 You may know The Addams Family musical from its popular Broadway run but the national tour has made major revisions that have reportedly improved the show significantly. In a highly unusual action, the original creative team actually came back to make those revisions, rather than some corporate committee. That said, many theater artists think that this is the way plays and musicals should be developed in the first place – a developmental process that takes the time it needs rather than rushed into an engagement prematurely.

Some of composer/lyricist Andrew Lippa’s original songs were cut and three new ones added. The script’s plot, co-written by Marshall Brickman and Rick Elice, has been tightened, so the characters’ motivations are clearer. New York stage aficionadoes will like that Jerry Zaks has directed the tour and that Pippa Pearthree, who wowed us at the Public Theater in the ’80s with Aunt Dan and Lemon, plays Grandma.

The musical’s characters are of course, unconventional to say the least. The Addams Family tradition began with Charles Addams’s cartoons in the New Yorker magazine in the 1930s and the captions essentially evolved into television scripts for the popular mid-1960s television series. The gloomy Addams mansion is home to a family and their servants who seemed to have stepped out of a ’30s horror film. Though, Gomez and Morticia, their daughter Wednesday, Uncle Fester, manservant Lurch and the rest might send chills down some spines, they are actually more human and hospitable than some of their supposedly ‘normal’ visitors. Herein lies the engine of Addams Family humor.

Brian Justin Crum who plays Lucas, the ‘normal’ young man who Wednesday falls in love with says the folks on tour use the catch-phrase: ‘define normal’. This aligns with Broadway’s interest over the past decade to question what we think of as normal and abnormal in other musicals as well, like Wicked and Avenue Q.

Crum, known for his boy-next-door portrayals and beach boy looks, says “Lucas comes to terms with the fact that he doesn’t have to follow his parents’ path. He can make his own way and do his own thing and love the girl that he loves, even if his parents don’t necessarily approve in the beginning. He’s a midwestern boy with two parents that are upper middle class and ‘normal’. She’s a stay-at-home mom and they want him to marry a nice pretty girl from Ohio. And he shows them this dark girl who lives in New York City with these really kooky parents. So he kind’ve forces them to see that: ‘No! This is my time! My decision.’ And he gets to follow his heart. It’s about turning against what you’re supposed to as the norm.”

Blake Hammond who plays Uncle Fester wasn’t able to see the show on Broadway because he himself was on Broadway performing at the same show times in Sister Act. So Hammond looked to the original cartoons for inspiration. He shares “there is alot of whimsical movement in those characters in the cartoon. They’re just not stagnant drawings. Most of the time when you see Fester in a drawing he doesn’t use his arms a whole lot unless he’s sort of in the air somehow. So I take him as his arms are always pretty much by his side and I like that because it sort of makes me different from anyone else in the show. I’m not married to it. I have to gesture sometime certainly. When he’s standing still I try to make him stand completely still, except for the facial.”

Hammond also draws from his childhood to connect with the piece emotionally. He says he grew up “in a conventional household by all appearances, but completely crazy inside, but in a great way, in a loving way. But I never felt like I completely fit in. Of course, that’s sort of given when you’re 12 or 13 years old and you start realizing you’re gay.” Hammond says he’s come to believe that ‘Normal is in the eye of the beholder.”

Something that seems automatically abnormal to most Western minds is the concept of ancestors as anything other than something fictional, relegated to thrillers and Non-Western belief systems. But not so for The Addamses. Spirits are part of reality. To support this, Alexandra Matteo, the Assistant Dance Captain and understudy for Wednesday, helps to make sure the cast crisply maintains Sergio Trujillo’s (Jersey Boys, Next to Normal, Memphis) choreography. She describes the movement as “very sharp and angular, very rigid, especially for The Ancestors, who are the ensemble, because they are all dead ancestors of the family past. Lots of hinge-ing, some might say awkward movement. But it looks really, really cool. It’s a little quirky like I think The Addams Family should be.”

Regarding the heart within choreography, Matteo points out “even though these are ‘darker’ people, in essence, they’re still people. They’re still human and they still have feelings and emotions and are dealing with very real things.” In other words, you could say, they’re normal.