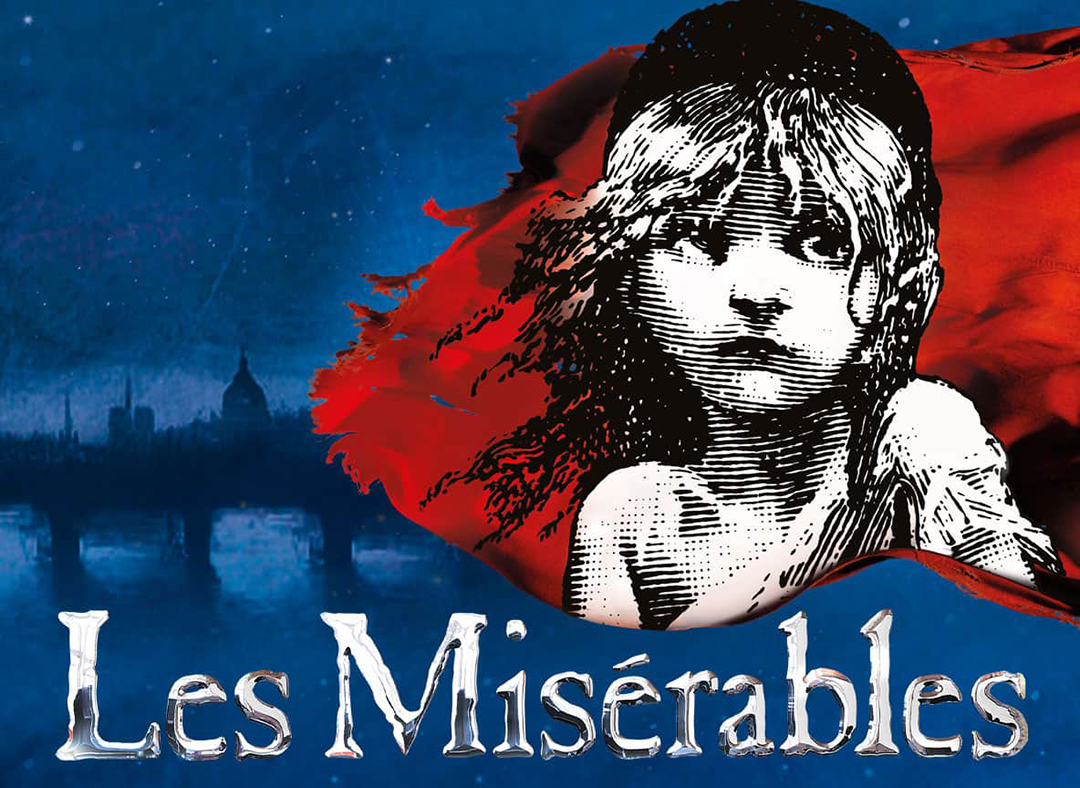 I first saw Les Misérables on stage at the Schubert Theatre, Tremont Street, Boston, around Christmastime,1987. It was the musical’s first National Tour (aka the “Valjean Company” and I was treating a good friend who had helped me through my mother’s recent illness and death.

The curtain rose on a spectacle the likes of which neither my friend Jill nor I had ever witnessed, and carried us, spellbound, through to the climax. The music played through my head for days.

I’ve seen Les Miz (as it was quickly nicknamed, like an old friend) several times over the years, from full-stage to small-screen, and while productions differed in length, quality, and approach, the story triumphs, and the modern, added songs continue their spellbinding effect–the music always goes round-and-round inside for days; Hugo’s instinct emotions–as he had intended, however ripe and sentimental–penetrate the heart. I’m eager to attend the latest touring company’s opening, see it burst forth in tricolor on the Orpheum stage; the tunes already pre-streaming on my brainwaves.

Now and again, a local personality appears on a Twin Cities stage, and this production’s Éponine is played by Christine Heesun Hwang, a Minnetonka High School graduate and former participant in the Hennepin Trust’s Spotlight Education program that has, to date, reached out to some 8,000 students in hundreds of schools.

Hwang, self-described in Playbill as “a queer, Korean-American playwright-actor,” advocates for marginalized groups in many areas. During Rohan Preston’s informative Star Tribune interview, Hwang credits high school drama activities with giving her confidence. Post Minnetonka, she enrolled in the BFA program at Ithaca College but left–after being cast in the third national tour of Miss Saigon as an alternate to play Kim. Opening night here, Éponine’s “On My Own” brought deafening applause and shouts of “Bravo” from the couple beside me, as did Jean Valjean’s (Nick Cartell) stirring plea to Heaven for Marius’s life, and Javert’s (Hayden Tee) anguished creed and farewell plunge.

While most performers won’t have roots as close to home as Minnetonka, each Broadway tour cast adds its singular savor. Many shows, even Les Misérables, that ended December 18, are in town for so short a run it behooves the theater-goer to keep an eye peeled. The ever-popular Hairspray hits town on January 10 for six days through January 15, followed by To Kill a Mockingbird, opening at the Orpheum Feb 14, and taking flight after its final performance on January 15. Tickets are on sale as I write, and slipping away. Similarly, Tootsie plays from June 20th through the 25th, each of these all-too-short runs are unique interpretations, and it’s well worth one’s while to jot down their dates.

Blockbuster Hamilton is slated to open April 4, 2023, and if you want to be in the room where it happens, know that tickets go on sale January 11th. Plenty of time, you say? Maybe, maybe not; while Hamilton will tread the boards through May 6th, seats fill quickly.

Consider your ancient forebears, from whatever clime or continent you may have arisen; they watched the weather, knew the game animals’ tracks and paths, the seasons to pick local fruits, nuts, and berries; knew if they tarried, rivals or Nature would come before them and the once-lush stalks and stems would stand bare, storehouses and stomachs empty. You’ve been warned: Good hunting!