A Word In Edgewise: Joe Dowling’s Back in Town with a Timely Tempest 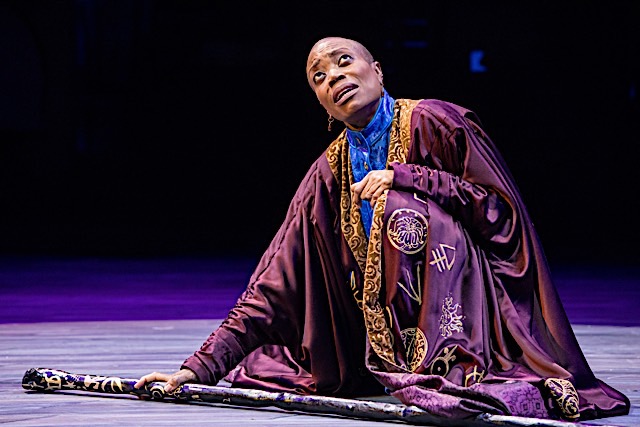 The man who led the Guthrie as Artistic Director for twenty years, shepherding its move from Vinland Place to its present riverine three-stage location, had been discussing with current Artistic Director Joseph Haj a production of The Tempest since 2018, when Dowling was directing Shakespeare’s play at London’s  Old Globe. Although time, circumstance and a worldwide pandemic intervened, the stars finally aligned for a slot in the Guthrie’s 2022 lineup.

While Dowling doesn’t claim prescience, and the world can always use a dose of kindness and forgiveness, this particular timing is acutely apt for a production featuring these themes. As one would expect both of this play and a Dowling handling, there’s a full-bore tempest of action, emotion, and schemes, stirred in a brew of dancing, drunkenness, fairy magic: tout le bazar. But the central theme is vengeance, plotted from several sides; revenge and whether it should be wreaked or not.

Twelve years ago, Prospera (Prospero in the original, here played by Regina Marie Williams) was done out of her dukedom of Milan by her brother Antonio and banished to an unnamed island with her daughter Miranda, now a young woman ripe for wedlock. Prospera has used the time to gain considerable magical powers and now uses her servant spirit Ariel (lithely played by Tyler Michaels King) to draw the ship bearing Antonio, Alonso, King of Naples, and others–including Alonso’s son Ferdinand–a conveniently marriageable youth–through a dreadful tempest and ship-wreck on the island’s shore. Here, at her leisure, Prospera’s plans of revenge will be brought to fruition.

There’s fancy and fairyness, and hints of unreality; directly after the ship comes aground, Ariel takes the stage to reenact for the spectators, exactly how the scene was constructed. The spectators are left to wonder.

Three groups of passengers roam the island, each ignorant of the other two, each with its own agenda involving vengeance. Prospera also has Ferdinand, deciding whether he’s worthy of Miranda’s hand; Alonso’s butler and jester have found Caliban, the island’s only native inhabitant, who hopes they will help him murder Prospera and regain his island; others from the ship, including “three men of sin,” search for Ferdinand, fearing he is dead. Athletic, wispy Ariel uses his powers to confront Prospera, pleading for compassion until she cedes, “The rarer action is / In virtue than in vengeance.”

Written in 1611, The Tempest is one of four plays often grouped with Pericles, Cymbeline, and The Winter’s Tale as “romance” or “tragi-comic,” dramas that still offer plenty of furore and magic without embracing the tragedies’ high body count. So yes, Miranda does marry Ferdinand, Prospera forgives the ship’s passengers, rebukes Caliban, leaving him to his island, and renounces her magic powers.

Some say The Tempest was the Bard’s bow-out from the stage, perhaps his last play written without collaboration before he retired to Stratford. If this is so, then Prospera’s final lines in the Epilogue speak for them both, as she breaks the fourth wall to enlist the audience’s help to return from whence she came:

“But release me from my bands / With the help of your good hands.” And we gladly comply, freeing Prospera at last from the island.

The Tempest will be playing on the Guthrie’s Wurtele Thrust Stage through April 16.