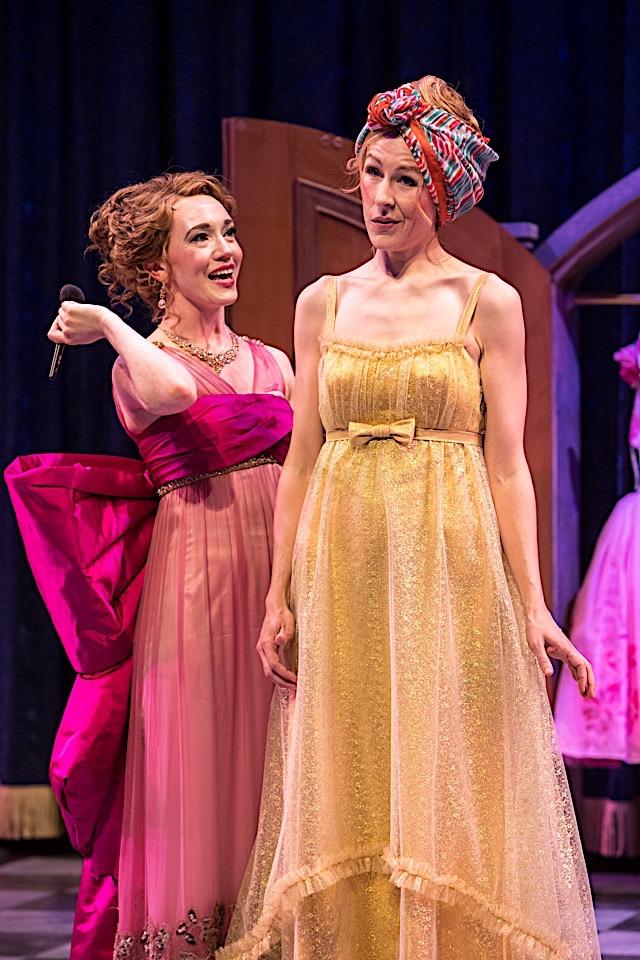 After an elephantine gestation period, Emma burst forth in rapturous, full-bore, post- partum-elation on the Guthrie’s Wurtle Full-Thrust Stage. Scheduled to debut in 2020, the play was just shy of its first preview when Covid-19 darkened the Guthrie–and the nation’s–stages. Yet Emma persevered.

Playwright Kate Hamill, known “radical adapter,” let her imagination run on a long leash with this screwball-comedy take on Regency doyenne Jane Austen’s 1815 novel. (In fact, a close reading of Austen’s oeuvre will reveal an already existing fierce sense of satire. Respectable ladies of the early 19th century ran perforce on shorter leashes many might have preferred.) If you’re only familiar with Sense and Sensibility or Pride and Prejudice, curl up with a copy of Emma and discover that Hamill’s take, while amplified, is not far off the mark.

“I like to look at classics through a new-play lens,” Hamill told the Guthrie’s Editor Johanna Buch in a March 12, 2020, interview. Without adding something “unexpected, timely and interesting” to an adaptation, she added, she would just be creating a “pale, copy-and-paste imitation of the original…I think it’s illuminating to create new work that expands and explores a classic story.”

And that she has done. Emma is as maddening a 22-year-old as she was in the novel with her dedication to pulling the motes out of others’ eyes while ignoring the beams in her own. Her hypochondriac father was as leech-clingy in the bound version–hard to increase on his paens to gruel as they flowed from Austen’s acid-tipped pen.

Sometimes it’s difficult to think of an earlier author seeing a modern work based on their words…sometimes not; Roman playwright Plautus might well have enjoyed an evening out on Broadway catching A Funny Thing Happened on the Way to the Forum, and I’d bet Jane Austen might just enjoy seeing her characters satirized to a greater degree today. She may have wished at the time that society gave her more occasion to open the throttle. Added to Hamill’s bubbly mix is the fact that the cast stayed in touch and intact for 2 1?2 years to finally able to perform as a team, intact as planned.

While the peripheral frenetic action occasionally obscures some central plot activity, the opening night audience was giddy with pleasure, applauding individual speeches and uniformly bowled over by the loose-jointed flailings and swoonings of insecure Harriet Smith (Samantha Steinmetz), for whom Emma (Amelia Pedlow) is determined to find a match. Pedlow herself is extraordinary, onstage in every scene, vitality, volubility, and will unflagging.

Mrs. Weston, Emma’s former governess and her first matchmaking success, now married and imminently expecting, rounds on George Knightly, Emma’s childhood friend, when he criticizes Emma’s lack of occupation. She brings down the house asking him what exactly an intelligent young woman like Emma is supposed to do when she’s not allowed to work and has no outlet for her energies? The answer, obviously, is to stir up trouble for herself and others.

Director Hamill also has no problem in breaching the fourth wall, and characters chide the audience–Emma for its hiding information from her, for one.

Dress up or down as you will, the theater is delightfully cool, but you’d best slip on your trainers and lace them tight to keep up with Emma & Co.

Emma will run through August 21.