A “Twelfth Night” To Remember 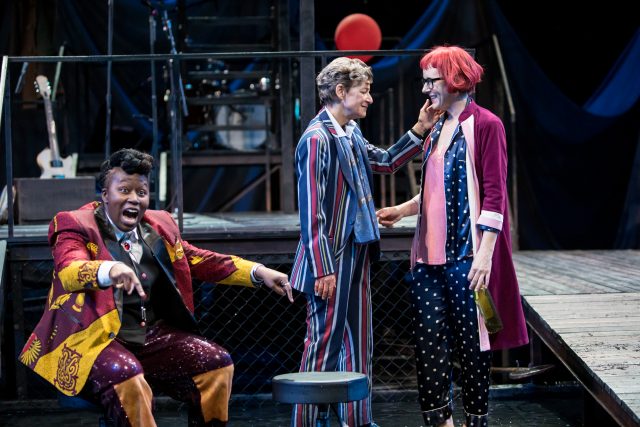 Each year, the Guthrie Theater produces a classical Shakespeare show, and this year it’s Twelfth Night hitting the stage. It’s well known that sometimes Shakespeare just isn’t for everyone, and that’s okay, it truly is. That being said, I think everyone should still experience as much Shakespeare as they can, especially if they are a theater fan. You never know when you’re going to find that one show that may stick with you.

For those who haven’t seen Twelfth Night, you may have seen one of the most well-known adaptations. The contemporary teenage comedy She’s the Man starring Amanda Bynes is an adaptation of this story. Or if you saw last year’s production of As You Like It, you won’t miss much as they are fairly similar stories of mistaken identities, falling in love with the wrong person and countless misunderstandings. This left me fairly confused as to why they would pick this show for 2020.

The show begins with a huge and violent storm off the coast of Illyria that leaves Viola shipwrecked. Through this she’s discovered that her twin brother Sebastian is lost, so she disguises herself as a boy by the name of Cesario to protect herself. Viola, as Cesario, begins working as a page service of Orsino, the Duke. Soon, like many Shakespeare shows, a complicated love triangle forms which complicates everyone’s lives.

I am convinced that a majority of people who don’t like Shakespeare are those whose first experience was a negative one. Our first experience with it is usually Romeo and Juliet, which is one of my least favorites, and it’s being forced to read it in high school English. However, it’s shows like Midsummer Night’s Dream, As You Like It and Twelfth Night that should be taught. These shows are still poetic in language, hilarious in nature and make Shakespeare more palatable.

Director Tom Quaintance has set this production in what at first feels modern, but eventually fizzles into a time period we don’t quite know. Shakespeare can be placed in any setting and any time period which often leads to some truly creative moments. To me, the set reminded me of the up-north territory that many Minnesotans know and love. This was elevated with the water that was on stage, which helped with a variety of comedic bits, and a string of lights above the stage that stretched out above the audience. I’m a sucker for any set that makes the audience feel included in the show, even if it’s something as small as a string of lights.

Twelfth Night starts slow, but eventually picks up thanks to the amazing local Twin Cities talent that the Guthrie has cast. There are truly no small parts in this show as everyone has a fair amount of stage time. Many of them even double as other roles and even musicians for various songs throughout the show. It’s no secret that often productions have to create their own music for these lyrics Shakespeare has written, however what’s the purpose? The show doesn’t need as much music and song as there was, many of these could have been cut as it distracted too much from the overall plot.

Shakespeare isn’t about just saying what is written, but often showing it. I’ll admit, even being a theater fan, I’ll sit in a show by him and say “Ok what did they say?” Not every sentence is understandable, but this cast makes it so through their blocking, delivery and inflection of the original source material. Shakespeare doesn’t write this in his scripts, which is why the actors have an important job to convey the true meaning through their performance, and this cast does it beautifully.

Emily Gunyou Halaas plays the lead Viola with honesty and humility. Her twin brother Sebastian is played by Michael Hanna, who showed off an impressive amount of athleticism while playing on the stage’s swing. Sun Mee Chomet is Olivia, whose performance left me wanting more as she has a knack for taking a character’s misfortune and drawing humor out of it. Sarah Jane Agnew is Maria, who can stand on her own two feet in terms of comedic chops. Her performance is elevated even more when her character begins to work with the other two comedic giants of this production, Sir Andrew and Sir Toby.

The best part of this production is the comedic duo that is Joy Dolo as Sir Andrew and Sally Wingert as Sir Toby. Listen, I love changing it up in terms of gender with any show, Shakespeare or not and this was by far the best casting decision of the entire production. Dolo brings a unique physicality to her role and gives Sir Andrew more feminine qualities because guess what? Not all men are masculine. She is a master at physical comedy and this ability shines in this role.

Her comedic timing is spot on with Wingert as they scheme and create a bit of mischief throughout the show. Wingert is cocky and arrogant as Sir Toby, which is a nice foil to Dolo’s Sir Andrew. Wingert is funny through a dry sense of humor throughout various scenes. At the end of the production, the only question remains is what can’t Wingert do? Wingert and Dolo also look absolutely fabulous in their custom made and flashy suits designed by Ann Closs-Farley.

Twelfth Night is a romantic comedy that will bring plenty of laughs throughout its run. Despite a slow start, it does pick up speed and eventually finds its footing. This is a pleasant production for any Shakespeare fan or someone who is just willing to dip their toe in the water.