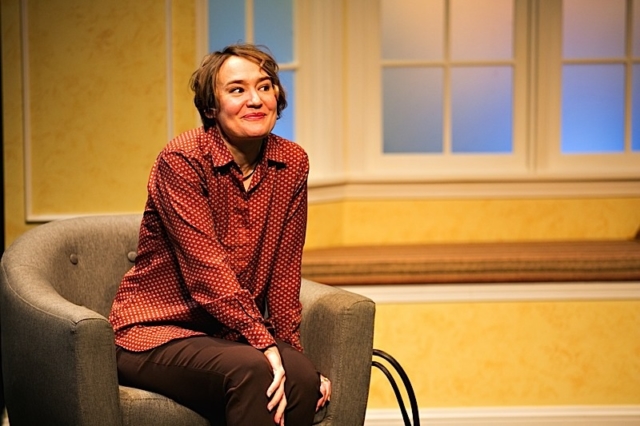 Photo by Laurie B Photography.

The solo play The Pink Unicorn is a very good gateway to discussion about the concept of “genderqueer.” Sympathetically written by Elise Forier Edie, the pain and confusion of a mother who fears for, is confused by, and loves her gender nonconforming daughter is touchingly and comedically acted by Kate Guentzel. This is the strongest aspect of the piece and should be seen by all parents everywhere to better apprehend the awful judgments against youngsters who don’t conform to standard unexamined gender codes.

Guentzel in the role of Trisha relates an ugly local backlash triggered when her daughter asserts herself as genderqueer and starts a school gay-straight alliance. The conservative Christians are predictably portrayed as jerks with a presiding preacher named Pastor Dick. This of course gets easy laughs, exposing how Edie evades the deeper discussions that can occur with conservative Christians. An opportunity lost. The same can be said of some of the “Action Tips” about what can be said and not said, listed in the program, which leads to one of the other issues with the script: Edie also sidesteps cracking open just what is fully meant by “genderqueer” and what might be going on inside the psyche and the physical body of the daughter discussed. If people don’t feel free enough to talk openly about their perceptions on the subject, no headway can be made.

In summation, The Pink Unicorn is a must-see for parents, no matter what the gender identity is of their children. This is good starting point to advance the discussion on this complex issue.