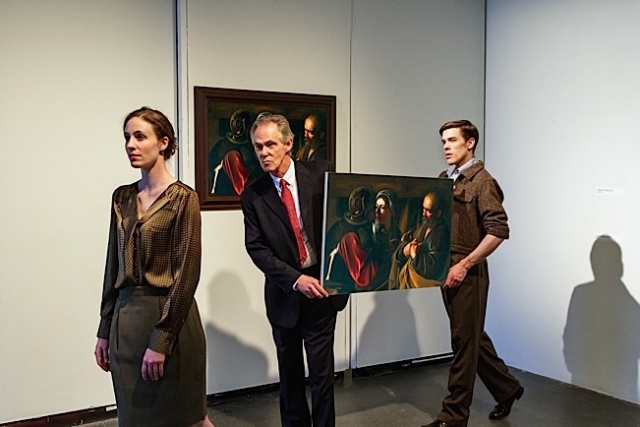 It’s always heartening when a progressive playwright has the integrity to see the complexity of a given situation and not resort to simplistic generalizations. This is an overriding virtue in how Josh Cragun has written and directed his latest, From Darkness.

This superb new drama, laced with wit, tells of Stanley Mansfield, the son of Metropolitan Museum of Art (The Met) trustee, Samuel Mansfield. The father yearns for a nationalistic sort of American art style to rival the established European greats. Ironically though, the son has actually honored his dad’s traditional overview by meticulously emulating the great Euro-masters. Hence, dad disowns him for wanting to study art techique, rather than go to Harvard to become a social climber. The action starts in the late 1930s and continues into the Warhol era when reproductions are elevated above original art.

At art school, however, Stanley is the teachers’ pet because he has internalized his father’s traditional view of art, a view which his teachers also align with. The late ’30s and the ’40s was a time when the male financial power elite ardently pursued European art “masterpiece” purchases as status symbols and outbid one another to demonstrate financial superiority. (This still goes on of course. Yasmina Reza’s comedy, Art, examines this as well in contemporary terms.)

Unfortunately, for Stanley, when World War II ends, a paradigm shift occurs. An era of abstract and conceptual art replaces the classical and formalist traditions adored and emulated in decades and centuries past. Stanley, in humiliation, sees his anticlassical classmates rise to prominence: Helen Frankenthaler, Jackson Pollock, Lee Krasner, and Willem de Kooning, just to name a few. Though these radical new art stars are considered bohemian, they exude self-importance, a feigned anarchic attitude, and pompous pretentiousness. Ironically, they are a “bohemian” elite. Many hail from northeastern elite colleges and universities.

Stanley is marginalized by all of this but he finds a way to profit clandestinely by using his classical expertise to make forgeries of old masterpieces. The audience is made to consider that though his forgery career is criminal, in so doing, he may still be 10 times the master painter that any of his contemporaries are.

Nicholas Nelson is compelling as Stanley. He reveals a disintegration from being wholesome and hopeful to giving over to rationalization and underhandedness. Yet we still wonder if it was right for the postwar power elite to elevate what the did over classically inspired work. Nelson also has a resonant speaking voice.

Art Peden is glisteningly urbane as George Drexel, a wealthy art collector thwarted by wealthier collectors and his own vanity. Tara Lucchino brings earthy elegance to Krasner. Ethan Bjelland brings an mischievously savvy twink-like quality to the shallow Warhol. A macho Zach Morgan finds the self-indulgence and pity in Pollock.

However, what makes this historical plot all the richer is the contrasting contemporary plot wherein the Met is faced with a forgery done by Nelson. The pretentiousness, academic absorption, and ethically conflicted character of the curatorial staff is played with lacerating honesty by Bjelland, Heidi Berg, and Cynthia Hornbeck.