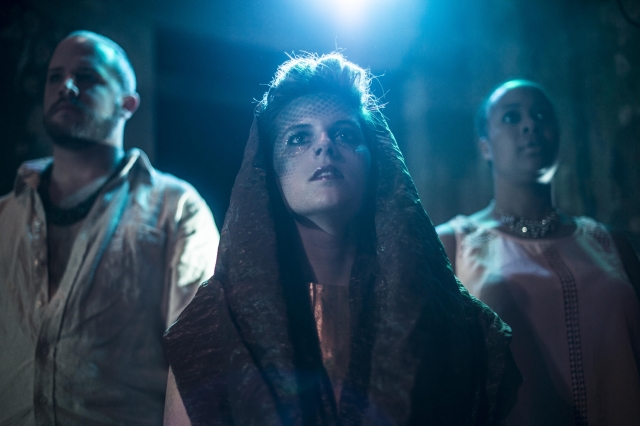 Savage Umbrella has a feel for history unlike any other local theater. Their current These Are The Men is an expansive and comprehensive re-telling of the story of Jocasta, the doomed Queen Mother-Wife of ancient Greek playwright Sophocles’sOedipus Trilogy, all in one uniquely captivating play. Blake E. Bolan and Laura Leffler-McCabe have co-written the piece in collaboration with the ensemble and the original workshop cast. It plays at Southern Theater.

Bolan has directed co-writer Leffler-McCabe as the heroine. Jocasta unwittingly marries her son, Oedipus, after he unwittingly kills her husband, King Laius. Hence, Oedipus is crowned King of Thebes. But the truth has yet to surface as many years before, Lauis sent his servant to kill his male child by Jocasta because an oracle prophesied that his son would kill him and marry Jocasta. He pathetically thinks that killing the child will forestall his Fate.

That male child, of course, was Oedipus. It’s a timeless story that demonstrates how blindly we walk without knowing the truth about ourselves and our family members.

Leffler-McCabe’s performance is luminous. She seems rightly traumatized throughout. This illuminates how even the woman of the highest stature in patriarchal Theban society is chained to her restrictive role, no matter what. She will remind some of a similar queen of consummate drama, Gertrude, Hamlet’s mother. 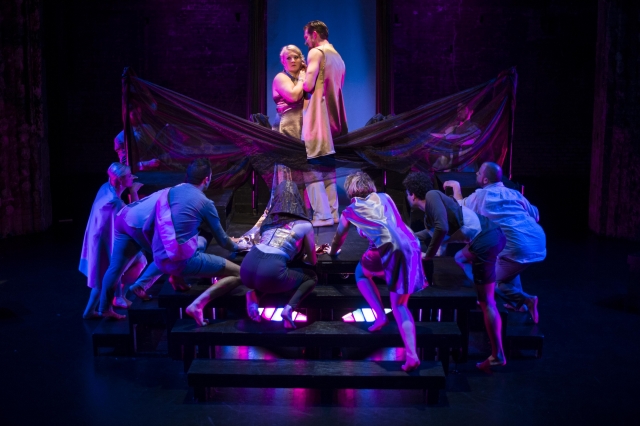 The dynamic Daniel Ian Joeck brings a visceral sense of rugged intelligence to Laius. Nick Wolf is splendid as Oedipus, which makes the incestuous nature of his relationship with the queen all the more ironic and unsettling.
Hannah K. Holman and Lisa Brimmer are spellbinding as two seers of dark visions, Pythia, the Oracle of Delphi and the demigod, Tiresias. Michael Ooms fascinates as Jocasta’s brother, Creon, as he subtly reveals the man’s frustrated desire for power.
The entire ensemble is seamless and they move with a fluidity that masterfully relates this epic story and matches Ted Moore’s ethereal sound design. They all move with a dreamy grace, sensually enhanced by Heidi Jedlicka Halvarson, Mason Mahoney, and McCabe’s lovely costumes. These Are The Men is both remarkable in its storytelling and sumptuous in vision.
The work has been beautifully directed by Bolan but unfortunately, the night I attended, gushing at the curtain call, she  jumped right up on stage, like sales rep, and brightly requested support for the work from an audience who was then denied the moments to absorb the darkly powerful show they’d just seen. It wrecked the mood. As I have written before, the practice of doing your support requests, if done at all, should be done only before the show starts or in the lobby. And it’s not fair to the actors and other artists.
Hopefully, Savage Umbrella and the Southern’s ARTshare program will consider this. A theater just a block away, Theatre-in-the-Round Players, has done their support requests before their shows for decades, as Frank Theatre’s Wendy Knox has done for years before their productions. They know that you need to absorb and savor the show afterwards.
These Are The Men
Through April 18
Southern Theater, 1420 Washington Ave. S., Mpls.
(612) 343-3390
www.savageumbrella.org