A Stirring “Paint Your Wagon” Soars with Spirit at the Ordway 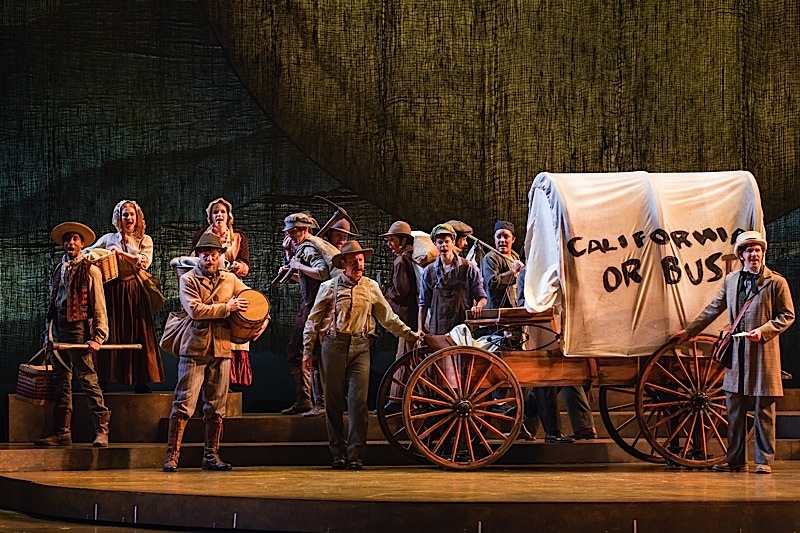 I must admit I had my doubts when I heard that the Ordway and Seattle’s 5th Avenue Theatre were collaborating on a revised version of the 1951 musical, Paint Your Wagon. I wondered if they were adhering to a multicultural agenda to flow with current political winds. Its creators, Alan Jay Lerner and Frederick Loewe (My Fair Lady, Camelot), are long dead, so no chance of any objections there. However, John Marans’ new book adaptation is simply brilliant. Though Lerner’s book is notably changed, I feel his spirit is still there. Marans has vividly reconfigured major characters into the 1850s California Gold Rush make-shift town setting with Asians and African Americans, along with a Latino and an Irish immigrant. I suspect if Lerner and Loewe knew how times have changed over the past 65 years, and that there is still keen interest in this almost forgotten gem, they would be very pleased, if not proud.

This revision is all done organically. We truly get a feel for a rough and ready atmosphere where racial tensions and greed across the racial spectrum often get the best of these men. We know this is probably how it actually was in these boom towns and the actors embody that. From petty territorialism over tiny patches of land to muscular bare-bottomed prospectors taking baths in wooden tubs, this show captures the rugged masculinity of desperately hopeful men who struck out in hopes of striking gold in them thar’ hills!

David Armstrong has directed this “revisal” with a steely eye toward the conflict between two diametrically opposed white men. Slave owner and overall exploiter, Jake (an appropriately slippery Jared Michael Brown) shapes the town to fulfill his greedy aspirations. Ben (a brooding Robert Cuccioli) is a man whose grief and disillusionment have thrown him into an unconscious spiritual quest. Both actors manifest their roles splendidly. Moreover, historically, these roles are generally accurate as white men typically ran western towns as the west expanded and the Native American population was decimated and brought to heel. Paint Your Wagon also recalls how the immigrant experience contributed to that expansion while keeping it clear that white alpha men of means had the indisputable advantage.

Ann Michels shines as Cayla, a Mormon woman Ben purchases in order to save her from being bought by lesser men who might pimp or bind her in some other way. Justin Gregory Lopez gives a winning and endearing performance as Armando, a kind young Latino man who becomes the catalyst to Ben facing an inner layer of racism he had sublimated. If you’ve caught the Guthrie’s current revival of South Pacific you may find a parallel between Ben and Nellie, an American military woman who too must grapple with her inner racist if she is find happiness.

Steven Eng and Mikko Juan are terrific as two Chinese men who clash with one another because of their profoundly different dreams and values. Rhett George is delightfully mischievous as a free black man and barber. Kyle Robert Carter gives a touching performance as Wesley, a slave who yearns for freedom. Eric Ankrim, in tough-as-nails form as an impetuous Irishman, reminds us of the economic and power disparity among white men. 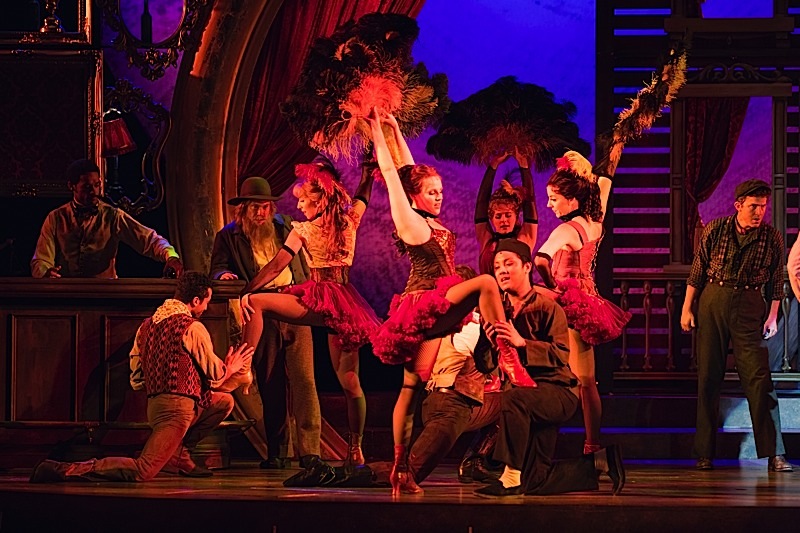 Ian Eisendrath’s majestic music supervision and vocal arrangements suit the Sierra Nevada setting where nature reaches out and up into the sky. All vocals are superb. The rousing theme song sung with heft by the ensemble is enough to make you want to embrace life itself with a big bear hug. Cuccioli’s soulful renditions of “Wand’rin’ Star” and that most transcendent tune, “They Call the Wind Maria,” are utterly soulful. (I remember Cuccioli’s excellent performance as Mark Antony in the Guthrie production of Shakespeare’s Antony and Cleopatra in 2002. He looks fantastic these 14 years later.)

Jason Sherwood’s set, David C. Woolard’s costumes, and Tom Sturges’ lighting make you feel the freedom of actually being out in the open mountain air even though you are in a big city sitting indoors. To lift your spirits, see Paint Your Wagon at the Ordway.