The bubonic plague swept out waves of people over centuries and one of its most infamous outbreaks was in 1660s London. If someone was thought to have caught it the house they lived in was marked with a symbol. No one could leave such a house on threat of state-sanctioned death. Theatre Coup d’Etat uses the lower level of the Soap Factory near St. Anthony Main to create the ambience of that dreadful time.In One Flea Spare, playwright Naomi Wallace, in what is surely a nod to Jean-Paul Sartre’s No Exit, has a married couple of privilege, a young girl and a young seaman, trapped in the once comfortable Snelgrave home. Jim Ahrens plays shipping magnate Mr. William Snelgrave who loves to exert his power over others in humiliating ways. He long ago lost any sexual interest in Mrs. Darcy Snelgrave (Ellen Apel) because of burns she has suffered and the youth that she has naturally lost – that unforgivable crime of being middle aged. 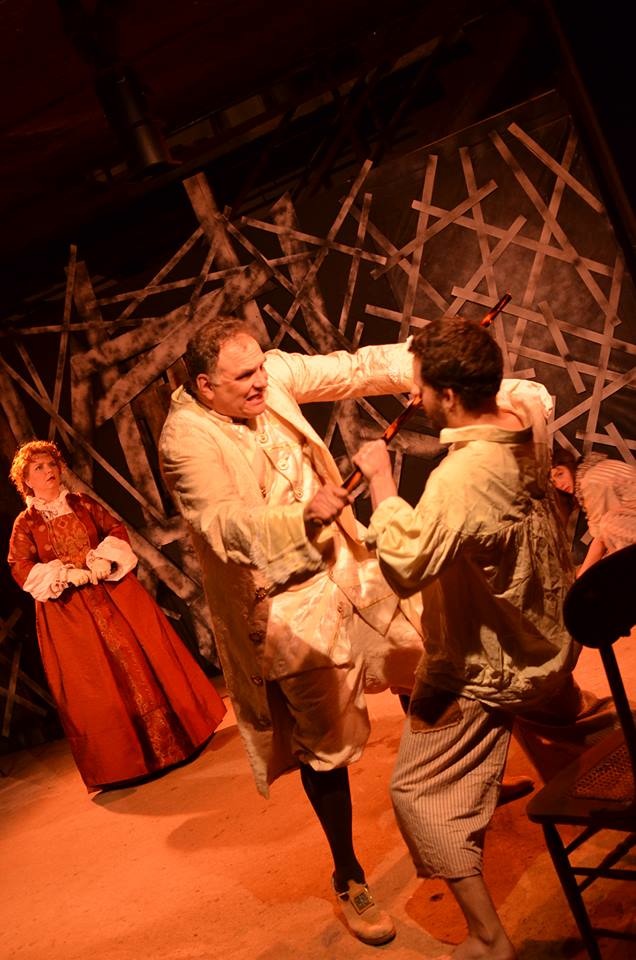 When two desperate intruders—12 year old Morse (Briana Patnode) and a sailor named Bunce (Peter Beard)—drop in, the Snelgraves are caught between a rock and a hard place because they don’t want the quarantine watchman, Kabe (Brian Joyce), to know. Unfortunately for them, he does end up marking their house.

Under James Napoleon Stone’s sharp eyed, sensitive, and brutally frank direction, the actors reveal the sexual discord beneath the surface. Beard brilliantly peels away the layers of Morse’s humility until he finally reaches his limit with Snelgrave’s condescending behavior. That said, when Bunce is ultimately in a sexual situation with Darcy, he knows exactly what it takes to arouse her given her shattered self-esteem. Beard and Apel play one of the most achingly and beautifully sexual scenes locally staged in years: a sexual healing in the time of plague. That notion itself is profoundly radical.Throughout the piece, Apel proves herself, once again, to be a first-rate classical actress. She has wowed audiences in the past with Japanese Noh and with her commanding lead performance in Starting Gate’s revival of Lillian Hellman’s The Little Foxes. In One Flea Spare she combines classical grace with a tug of war between sexual restraint and raw sexual desire that simply beguiles. 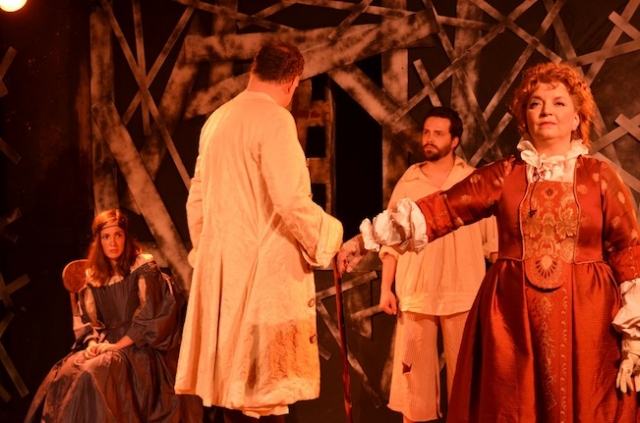 Ahrens and Patnode create a stunningly heretical energy between their characters. Patnode, the actress, is an adult but, in spite of being too soft-spoken at times, hers is a remarkably convincing portrayal of a child. Some of her scenes with Ahrens are unsettling thanks to that and that is as it should be.

Ahrens is the very embodiment of imperialistic arrogance and of the period. His is an enraging portrait of a man whose disregard for women, children, and less prosperous men ultimately gets the best of him. It’s also nice to report that Wallace, who qualifies as a feminist playwright, so clearly illuminates the poorer man’s diminished lack of options in contrast to the wealthier man’s born advantages.Joyce is vibrantly callous, a chilling reminder of just how desensitizing panicked times can make people. Meagan Kedrowski’s one room setting has an ideal sense of degeneration and decay that plays of the rugged Soap Factory setting. Mark Keiffer’s perfectly placed lighting makes this evocative production all the more evocative. Barb Portinga’s distressed period costumes are just right. Adam Scarpello’s stage combat direction and Tyler Stamm’s makeup also enhance the oppressive period feel.