A Song, A Conversation 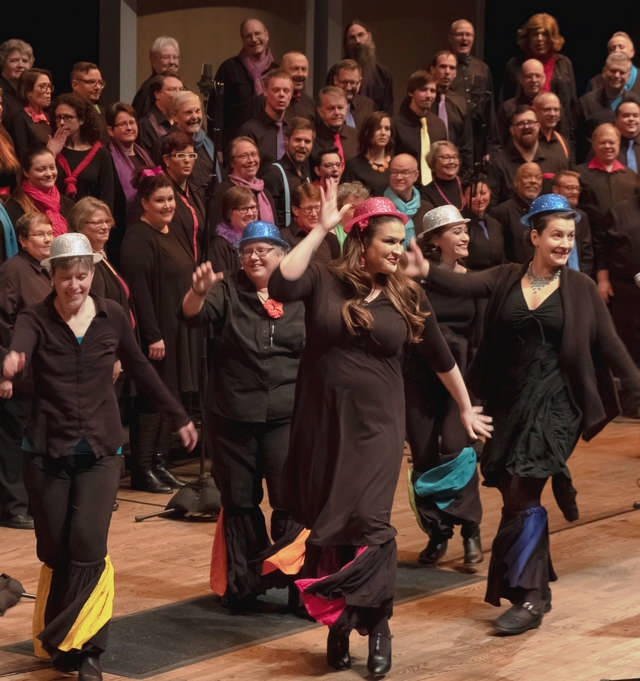 Guest conductor Tesfa Wondemagegnehu will lead the One Voice community during the June 29 and 30 performances. Photo courtesy of OVMC

One Voice Mixed Chorus’ upcoming “Resistance and Resilience: Voices of the People” is bringing the jams and the important conversations.

Minnesota’s GLBT chorus, One Voice Mixed Chorus (OVMC), will surely bring people to their feet… or perhaps to tears. OVMC’s upcoming show “Resistance and Resilience: Voices of the People” will be at the Ordway Concert Hall June 29 and 30 to tell the stories of the African American and GLBT struggles for human rights. The concert features the Midwest SATB premiere of “Quiet No More”, a new commission honoring activists who fought back during the GLBT Stonewall uprising 50 years ago. Guest conductor Tesfa Wondemagegnehu will lead the One Voice community in their celebration of the community’s legacy and sing out against hatred in all forms.

“When we first started meeting about programming this concert in the summer of 2018, we realized that we had this amazing project, connected with over 25 LGBT choruses across the United States,” Wondemagegnehu says. “There are different composers from around the country that were a part of this writing collaboration. And we were like, ‘All right, that’s about an hour long, what can we pair with this amazing work that can talk about our marginalized communities building to be resistant and be resilient?'”

OVMC’s concert is the exact weekend of the Stonewall uprising 50 years ago, and Wondemagegnehu says this will definitely be reflected in the show.

“This idea of liberation, this idea of, like, ‘You know what? We fought back, and we made major progress!’ So as somebody that identifies as straight, and somebody that also identifies as an ally, I am looking forward to learning as a part of that journey. You know how some people take their pilgrimage to the Mecca? I feel like I’m taking my pilgrimage right now, this coming up June,” he says.

Wondemagegnehu says he hopes the audiences understand that we really won’t make progress if we keep having conversations in our silos. We have to be able to have tougher conversations, and we have to be able
to see that there’s a large swath of our population that would possibly identify as an ally, and/or abolitionist. But, he adds, we need to figure out the best practice on how we engage with them.

One Voice Mixed Chorus’ upcoming show Resistance and Resilience- Voices of the People will be at the Ordway Concert Hall June 29 and 30 to tell the stories of the African American and GLBT struggles for human rights. Photo courtesy of OVMC

“How can we inspire them through song and story, and then say, ‘Hey, the One Voice family has been doin’ this,
y’all, for thirty years. Thirty plus years.’ You can be a, a patron, but you can also be a part of our grassroots movements when we’re going out and singing and marching together because that’s the part of One Voice that I’ve always been attracted to. One Voice is not just singing about it, they are out on the street,” he says.

When he isn’t conducting powerful sets with OVMC, Wondemagegnehu instructs a music and social justice class at St. Olaf College, and he says he finds that the combination of music and difficult topics leads to some of the most powerful conversations.

“We started every class with these difficult conversations. And we realized that, even at a place like St. Olaf, there’s students that come from all different kinds of experiences and different backgrounds and cultures,” he says.

Wondemagegnehu says when making music, he notices people forget their own drama, their differences, and their personal beliefs and start to open up and listen to the people around them. This conversational music making process will be reflected in OVMC’s “Resistance and Resilience: Voices of the People.”

“We can start to have those conversations after that problem, that moment, and yes it’s gonna probably make some people uncomfortable and ruffle some feathers, but because we’ve already made a little bit of progress at the front end just from making music, we can then have that conversation, and then we close it out with making music,” Wondemagegnehu says.

To join the conversation, visit ordway.org/event/one-voice-mixed-chorus-resistance-resilience. To learn more about One Voice Mixed Chorus, visit onevoicemn.org.
Tickets are available at www.onevoicemn.org/june with promo code “lavender.”