A Slice (Or Two) Of Heaven 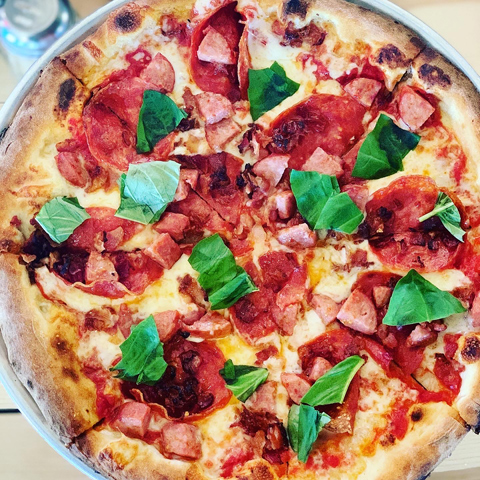 Meric’s uses high-quality ingredients, partnering with nearby Greg’s Meats for their ham and sausage.

Earlier this year, I tabulated thousands of votes to determine what restaurant serves the best pizza in Minnesota. From Albert Lea to Duluth, great contenders battled it out. The top five ended up being hidden gems, and are not necessarily shops receiving a lot of praise on Instagram.

I had the honor of visiting the top spots. They’re all family-owned and operated, and in today’s world, supporting those businesses is more important than ever.

Mama’s Pizza, located just north of the State Capitol in Saint Paul, has been family owned and operated since it opened in 1964.

They stay relatively simple with the selection of pizzas. However, one of their bolder menu items, the Flavor Explosion, is extremely popular. It has sausage, pepperoni, bacon, sweet pineapple and banana peppers.

The secret is in the sauce. Tony, the current co-owner, is the only living person who knows the sauce recipes used for the pizzas and for the other Italian fare they serve, including spaghetti, stuffed shells and mostaccioli. Tony’s sister, the other co-owner, doesn’t even know the recipe. It was developed by Tony’s mom, uncle and grandma, and was used for decades. The sauce is so popular that it is sold by the gallon.

Words to the wise: when you get a pizza at Mama’s, know that it will come to you extremely hot. It’s intentional. You will need to let it cool before taking your first bite.

The heat was something El Pres from Barstool Sports noticed when he tried Mama’s Pizza in 2018. The staff knew he was stopping by, so they were able to cut the pizza into slices how he likes it. El Pres, who makes it a mission to try the best pizza in the country, gave Mama’s a relatively high score of 7.5 out of 10.

Mama’s is available for carry-out and dine-in. They don’t take reservations, so if you go on the weekend, make sure you’re ready to wait for a table. When I stopped by before Mama’s opened on a Sunday, folks waited outside for the dining room to open. 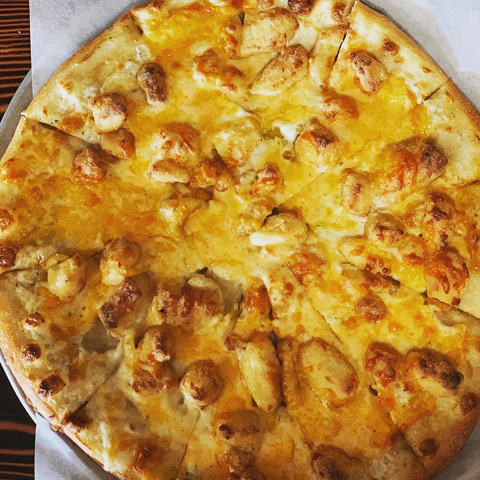 Cheese curds on a pizza_ Yes please. And the sauce is ranch dressing. It’s available at Pizza Barn, located in Princeton.

Meric’s Woodfire Oven and Tavern is located in Hampton, a town with less than 800 residents located about 20 minutes south of Downtown Saint Paul on Highway 52. It opened in October 2018 in what once was the spot of Naughty Pine Tavern, a bar which served the community for over 100 years. Naughty Pine Tavern was destroyed by fire.

Meric’s is owned by husband-wife, duo, Michelle and Eric, hence the name, Meric’s. They make wood fire pizzas in an oven that is typically between 700-800 degrees. It takes about two-and-a-half minutes to cook one pizza.

Michelle and Eric aren’t afraid to spend money on quality ingredients. All of their produce is fresh. Plus, they work with nearby butcher shop, Greg’s Meats, for their ham and sausage.

Those products shine on the Porkie Pie pizza, which includes sausage, bacon, basil, garlic, mushrooms and a fantastic chili honey.

Other popular pizzas include the So Meaty, which has sausage and pepperoni, along with the Belmont, a white pizza with smoked chicken, bacon and a pesto drizzle.

Meric’s adds an outdoor patio during the summer months, hosting bean bag tournaments and other events. 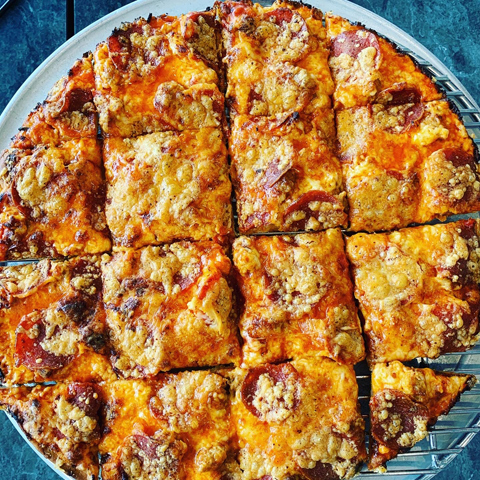 The golden bake of a classic pepperoni and sausage pizza at Aurelio’s Pizza in Ramsey.

Owners Troy and his wife, Diane, own a few other businesses in Montgomery, but when the last pizzeria in town closed, the couple knew they needed to bring that back for residents. They had no experience operating a restaurant.

They leaned in on Diane’s passion for cooking. She owns about 1,000 cookbooks. That’s after she gave away hundreds more a couple years back.

Pizzeria 201 has a garden right next to their shop which grows the produce used on their pizzas. Plus, Troy and Diane live on a farm and the hogs they raise are used for the sausage and bacon. You’ll want to get the Hog Heaven pizza to sample the locally raised meat.

As for other pizzas, try the Chicken-in-a-Grass-Skirt, with garlic chicken, pineapple and pepperoncini peppers with an Alfredo sauce and coconut sprinkles on top. It was recognized at the International Pizza Expo in Las Vegas. I was a fan of the vegetarian Roman Holiday pizza with fresh spinach, white onion, Kalamata olives, artichokes, tomatoes and multiple cheeses.

Pizzeria 201 has three mobile pizza ovens that can be rented out for graduation parties and weddings. They also stop by breweries in southern Minnesota. The Neapolitan pizzas cook in 90 seconds. 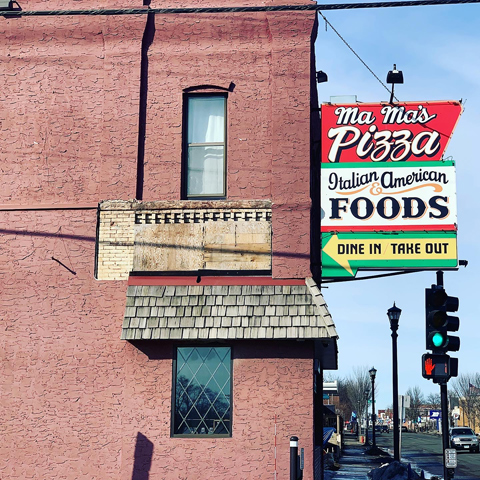 Mama’s Pizza, just north of the State Capitol on Rice Street, has been family owned and operated since 1964.

Pizza Barn is located in the city of Princeton, which is about 45 minutes north of Downtown Minneapolis. When the restaurant originally opened in 1983, it was the only pizzeria in town. Today, it’s one of six pizza shops in the town of 5,000 residents.

So how do they stay ahead of the pack? It’s their Cheese Curd Pizza. It’s worth the trip no matter where you live in Minnesota. The pizza is packed with cheese curds from Ellsworth, Wisconsin. They’re baked on a pizza with more cheese. The sauce — it’s ranch dressing. The crust is thinner and comes out really buttery. It’s a greasy delight that I adored.

At one time, Pizza Barn had 13 locations throughout Minnesota. However, due to the struggle of finding quality management, the owners decided to close the other locations, directing their focus on the original location in Princeton.

Pizza Barn offers take-and-bake pizzas, including the infamous Cheese Curd pizza. You can also order gluten-free, cauliflower crust and broccoli crust pizzas. They also carry dairy-free cheese for those who are lactose intolerant. 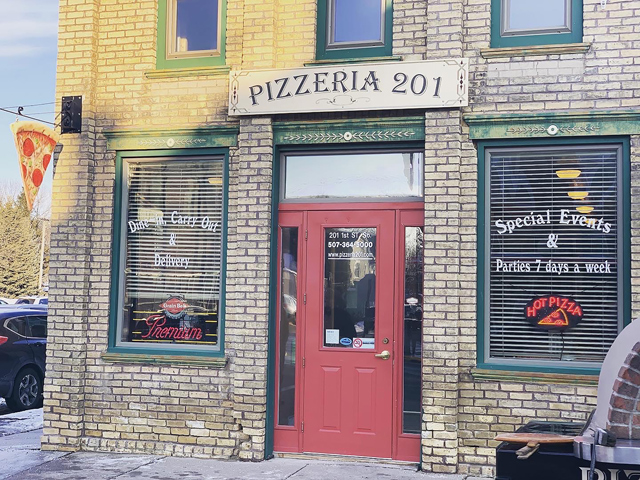 Pizzeria 201, located about 60 minutes south of Downtown Minneapolis, uses produce from the garden outside their restaurant and meat of the pigs from the owners’ farm.

The headquarters for Aurelio’s Pizza is in Illinois; the company has about 40 locations in the United States. The Aurelio’s in Ramsey is the only one in Minnesota. It originally opened in Roseville in 1983 by the Stawski family. They wanted to expand, so they moved to Ramsey where they could add a bar, more seating and a patio.

You will find gourmet pizza at Aurelio’s, with 100 percent real mozzarella, dough made in-house, and hand-pulled sausage. Other ingredients, like the sauce, are Aurelio’s secret recipes, and are frequently shipped in from their Chicago suburban headquarters.

They serve what many view as the traditional Chicago style deep dish pizza, with a sweeter marinara sauce on top. However, their staple is more of a thin crust pizza.

With the style of pizza they’re serving at Aurelio’s, expect for them to take longer to cook. They’re also more expensive than a traditional pizza you may get from a delivery place. However, their 18-inch pizza feeds more people than you may think.

Aurelio’s caters to gluten-free dietary restrictions, offering a specific gluten-free crust, made at their Illinois headquarters.