A Shattering Revival of the Classic Sexual Assault Drama, “Extremities” 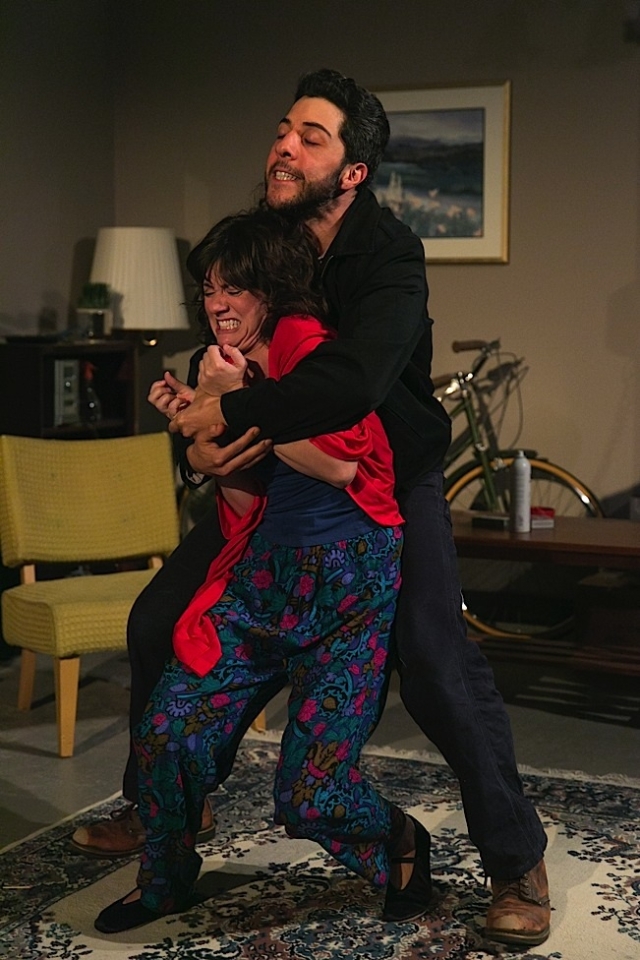 Dark and Stormy is delivering a gripping staging of William Mastrosimone’s 1982 drama, Extremities, at Grain Belt Studios. Playwright William Mastrosimone sets up a diabolical dilemma wherein a woman named Marjorie is alone at home while her two female roommates are out. She is interrupted by an intruder named Raul who physically assaults her at length with the intention of raping her. But he doesn’t actually rape her because she gets the upper hand, handcuffs him, and puts him in the fireplace. Most of us would say, “Hooray for her! She foiled her attacker!”

However, no forensic evidence of rape exists. This means that if police were called, Raul could actually be perceived as the victim. This conclusion would be given further reinforcement given that Marjorie goes on to terrorize and torture the man in ways reminiscent of how he terrorized her.

When the roommates return, they question Marjorie’s retaliatory violence on grounds of morality and moreover, that her violence could have them perceived as potential accomplices to a crime in the eyes of the law. That said, they are also empathetic to what Marjorie has endured. However, if they call the police there is a possibility they could all go to prison and the original criminal would go free, hence, be free to exact his own vengeance on them when they get out of prison. It’s the ultimate rock and hard place and few plays in dramatic history have shaped such a predicament so scrupulously.

Director Mel Day has guided this inspired and intimate production with a primal eye that plugs into how quickly the sadistic instinct is triggered without any hope of reversal in both men and women. The staging is chillingly served by Annie Enneking’s breathtaking fight choreography.

Sara Marsh is magnificent as Marjorie. She bravely plumbs a range of human emotions from harmony to seemingly hopeless victimization to wanton destructiveness. The powerful James Rodriguez terrifies as a man we meet presenting a face of false friendliness that snaps into a state of intense intimidation, physical destructiveness and lurid verbal shaming as he physically subdues a defenseless woman, and then in a beguiling reversal of fortune, onto reaping swift negative karma for his brutish actions.

Roommate Terry fluctuates between empathy for Marjorie and dread over the possible ramifications of not calling the police. Actress Tracey Maloney embodies her dilemma with an anguished sense of humanity.

Roommate Patricia is the voice of reason and bargaining in an impossibly unreasonable situation. Both sides, like nations at war, have dug and dig their heels deeper toward a point of no return. Emily Bridges is splendid in the role as she nobly consults probes for a solution for a problem that, if understood at all, can perhaps only be understood emotionally.

Extremities is a lightning rod of a play. Some will speak critically of the women’s white privilege and of Raul being a non-white laborer with a pregnant wife and kids. At the time of play’s premiere and its film version in the 1980s, Extremities fueled much sympathy in the era of Andrea Dworking-Catherine MacKinnon viewpoint of feminism.

Mastrosimone doesn’t deal with problems of forgiveness and redemption. He boldly makes us face the brutal possibility that for most of us, some things go too far and are simply unforgivable. Each viewer will draw her or his own conclusion. It’s a play that makes you think for yourself in the face of very unsettling information.