A Savvy Examination of a Renowned Lesbian Love – “Vita & Virginia” 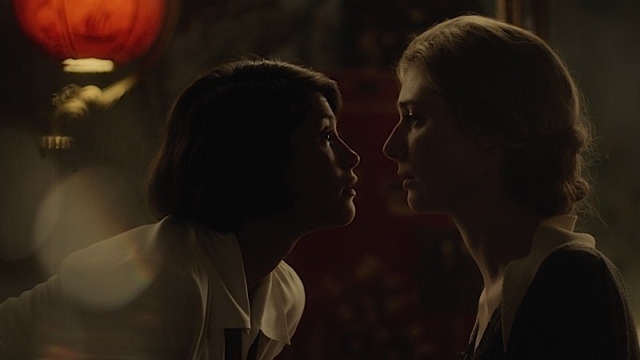 The romantic tensions between writers Virginia Woolf and Vita Sackville-West have served as one of modern gay history’s most fabled examples of struggle within lesbian relationships. Eileen Atkins has adapted her play, Vita & Virginia, into a screenplay co-written with Chanya Button. At one point we hear the subculture they live within called a “Sapphic pageant”, an indication that the film, like the play, Vita & Virginia, hews to the textures and vocabulary of the time. Nowadays, this might actually be thought of as a revolutionary or counter-revolutionary act in and of itself, depending on your perspective.
The film version, also directed by Button, is an examination of two polar opposites. It doesn’t default into the canard of “oh if they only just could have been themselves”. These were two very different women of consequence, and their “Sapphic” leanings were well known. Moreover, these facts have been widely acknowledge by mainstream culture ever since their hey-day. For those of us coming out between Stonewall and the AIDS Crisis ’80s, Woolf especially was canonical. She was standard in English Departments in western nations and beyond, in many cases, even before the Post-Kinsey Sexual Revolution period. 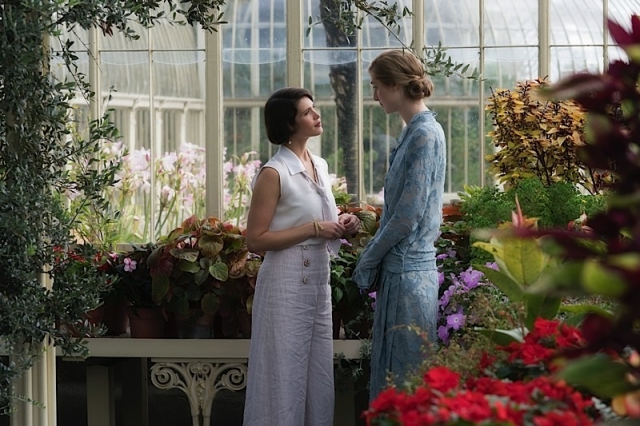 Both writers examined their individual interior life and gauged it against social reality from their own unique angle. Each navigated their unconventional marriages with bisexual men in distinctly different ways. There was never any illusion that open marriages were easy going. Both felt at times a powerful sense of being the opposite sex. Woolf’s fantastical crossgender novel, Orlando, was inspired by Sackville-West.
Vita’s robust self confidence emanates from the vibrant Gemma Arterton like a force of nature itself. Vita’s own literary output was finding a larger readership than Virginia’s. She was intrigued by the bohemian lifestyle of the Bloomsbury Group literary circle of which Virginia was synonymous while she careened with a devil-may-care about British upper class appearances she was expected to uphold.
Vita’s serious personal shortcoming, as evinced by Atkins-Button and viscerally by Arterton, is in not appreciating the palpable bluntness of her carnal power over the fragile Virginia. Perhaps having lived audaciously and with social privilege, the character has failed to discern, much less calibrate, how a powerhouse personality can steamroll those around her. How insensitive and callous we humans can be, even toward those we love and/or desire deeply. 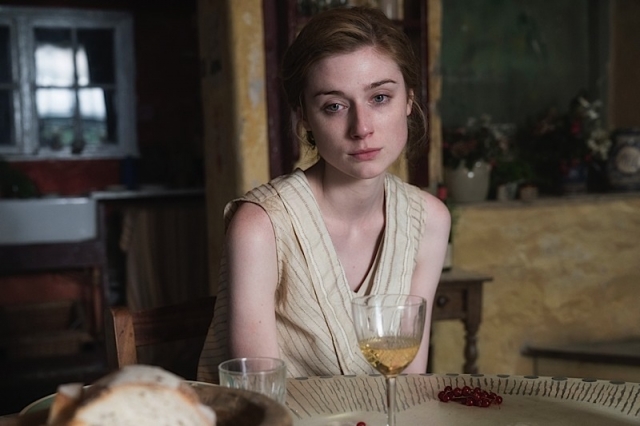 Ironically, this foible hits a brick wall with the delicate Virginia, brilliantly portrayed by Elizabeth Debicki. This actress plumbs inner recesses of the mental illness widely believed to have factored heavily to the author’s famous suicide. Hers is a Virginia whose intricate and well-spoken self-examination reminds us that human beings are complex. And that so often we, like Vita, live our lives oblivious to signs, nuance, and subtleties in others that we’d be wiser to take notice of. That self-examination, along with its gender-political implications, flows naturally through the words of the film. Though some would call this stilted or hyperbolically political, there are such people who do pause to think out what they say before they say it, and who’ve also internalized refined socio-political views—Virginia Woolf is known to have been so inclined. So the “stilted” argument is one that, in this case, loses steam.
Button gets splendid results from actors who capture the edified manner of characters withheld by prim English propriety. It’s a quality that some Americans mock and myopically think is mere affectation. But it’s not. Vita & Virginia dispels that. In the case of these two particular women, it was authentic, not a joke languidly cracked by those who trivialize history. 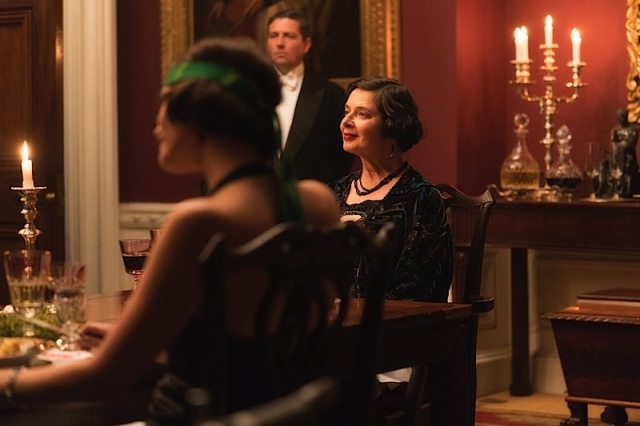 The specter of the British upper class booms through fabulously in a larger-than-life turn by Isabella Rossellini as Vita’s rigidly ultra-conservative mother for whom the asexually virtuous aristocratic image is to be held up at all costs! The greatness of this supporting performance is that even if you dislike the character intensely, you can appreciate how purely she lives by her principles. Like mother. Like daughter. Even more satisfying is we can recognize how Rossellini herself is a chip off the old block. There’s something absolutely marvelous that this actress whose very birth shocked the world would play this role with the lines she speaks.
When Renaissance Woman Atkins completed her play version in the early 1990s she was more focused on the psychological than the sociopolitical. Of course, she naturally saw no need to gild the lily about “ain’t it awful” to have been gay at that time. After all, it’s organically built right into the characters’ interactions and the society depicted. This apprehension translates gracefully at those points in the screenplay where indeed there are searingly pointed statements about the subjugation of women. 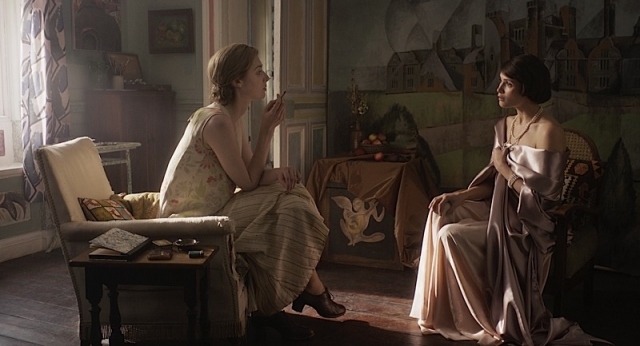 Both women were the very embodiments of feminism, if not lesbian feminism, at that. Ingeniously and wisely, Vita & Virginia makes that understood with deft use of dialogue and without banner-waving. This less explicit approach, the like of which is seen too often in television programs and politically based advertising, actually makes a deeper feminist statement that’s difficult for even the misogynist to shake. In other words, it is genuinely subversive. In Bloomsbury, sexism was understood to be an irrefutable fact of life. In addition, because we are dealing with the Bloomsbury effect, we are seriously compelled to look at the ethics of intimacy with same-sex female relationships, a concern also brilliantly addressed in last year’s film triumph, The Favourite. In light of some sticky divorces of late between same-sex spouses, this is certainly something that the GLBT community can benefit from reflecting on. 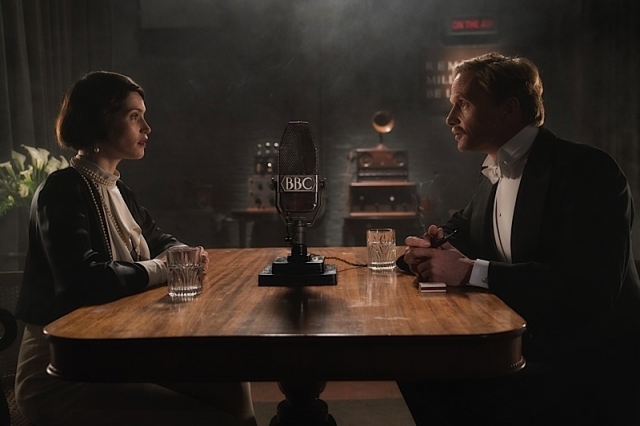 This nods to Woolf’s pioneering feminist treatises that tend to get lost in the shadow of her marvelous biggies: Mrs. Dalloway, Orlando, and To the Lighthouse. Her shorter works, A Room of One’s Own and Three Guineas, both superb explanations of the dark side of patriarchy, still thunder with revolutionary insight. Atkins builds on that in showing how patriarchal pressure can definitely play a part in warping same-sex relationships. But she also reminds us that same-sex lovers/partners must be sensitive to one another and not play the patriarchy card when personal irresponsibility is sometimes where the real problem resides.
It should be noted that Atkins actually appeared in one of the earliest productions of the groundbreaking lesbian-themed play, The Killing of Sister George, in the mid-1960s. As a classical actress of substance she brings that rich depth of comprehension to Vita & Virginia, not to mention maturity. Moreover, Button beautifully translates the Atkins gift into fine film art.
American cinephiles who follow first-rate British actors know of Atkins’s memorable film performances in Equus, The Dresser, Cold Comfort Farm and Gosford Park. Clearly, she’s also one hell of a writer.
Vita & Virginia
Starts Sept. 6
Lagoon Cinema, 1320 Lagoon Ave., Minneapolis
612-823-0320
www.landmarktheatres.com