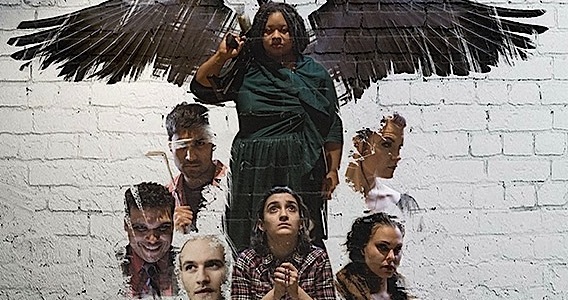 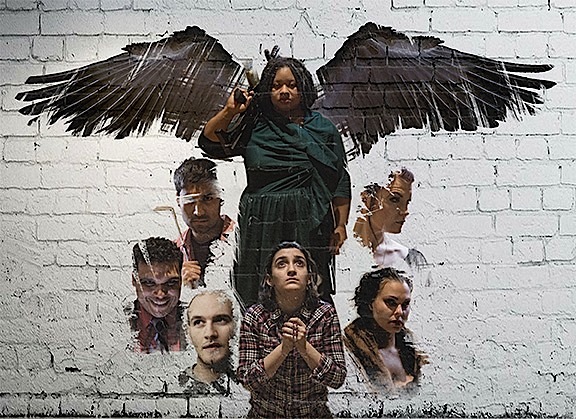 God seems to have either gone Missing in Action or senile. This has compelled the angels in heaven to revolt—seriously and actually—and the havoc wreaked on Earth because of that, erupts in Marisol, Jose Rivera’s dystopic 1992 epic drama. Ricardo Vazquez has directed an enthralling production of this absurdist work of magical realism for Theatre Coup d’Etat.

The protagonist named Marisol is akin to an Everywoman figure, like the Everyman figure that looms in medieval morality drama. A wanderer in a fallen world, Marisol, a young Puerto Rican woman, seems to exist by the skin of her teeth in late 20th century New York City amidst the ruins of the apocalypse. The superb Sabrina Diehl plays the one character in this living nightmare who has some shred of sanity left as chaos, hunger, and cruelty ensue and pervade.

The horrors depicted are as psychological as they are physical: a man giving birth to a stillborn baby, an unhinged arsonist on the loose, being falsely and fanatically accused of being a Nazi even though you’re not one. Rivera demonstrates brilliantly how dark irrational thoughts can ricochet into creating a dark horrific reality.

What makes Marisol, the play, a prime challenge to pull off theatrically is the sheer psychic enormity of the negativity it portrays. How does one not overwhelm the audience to the point that its deeper meanings are swallowed up? How does a director certify that it won’t play at one general sustained level only? Indeed, there are multiple dimensions of evil in Rivera’s bleak vision.

Ingeniously, Vazquez has risen to that challenge with a cast that astonishes, every one. Each scene in this particular production is piercingly focused and specific in intent. This is remarkable because the script is written at unusually high emotional pitch. Therefore, the trick is to not let the intensity and the language get smothered in themselves while playing the scenes to the full throttle velocity a successful staging of Marisol demands.

As you would imagine, all performances soar with the masterful Diehl navigating the turbulent narrative. Craig James Hostetler is utterly visceral in a great performance as the fittingly named Lenny, a dependent emasculated young man ruled by both threatening behaviors as well as pathetically submissive ones. He is stunningly matched with a marvelously cunning Kelly Nelson as the controllingly cruel white collar June, his bitter sister and Marisol’s fellow very close friend. Yet another notable portrayal by Nelson, one of the Twin Cities’ finest young actresses.

The excellent Nikhil Pandey exudes paranoid volatility as Man With Golf Club and Scar Tissue (yes, that is the character name). Pedro Juan Fonseca is an intimidating powerhouse as Man With Ice Cream whose menacing presence is truly unsettling. A sterling example of what seems to be a smaller throwaway role, played to the hilt. At points when Fonseca struts across the space he is downright frightening!

Over it all is a disturbingly commanding performance by Dana Lee Thompson as the Angel who seems to be influencing some of the hellishness at some hidden insidious level. AnaSofia Villanueva rounds out this spectacular cast with a splendid turn as Woman in Furs.

The spare minimalist setting in an actual chapel at SpringHouse Ministry is peppered with black trash bags, cardboard signage and crime scene tape—stark signifiers of a culture in the last gasp of decline. Simple but profound costumes by Chelsea Wren Hanvey and lighting by Mark Kieffer punctuate the grim atmosphere with strong understatement. Forest Godfrey’s evocative sound design further reinforces the spectral realm of this wrenching Marisol.