A Powerslam Of Pride 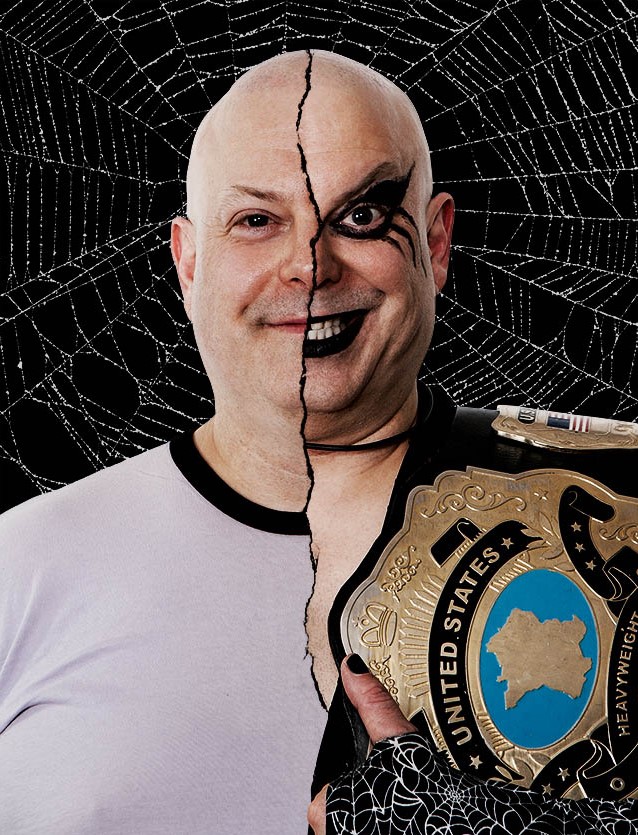 Terrance Griep—also known as Tommy “The Spiderbaby” Saturday—expounds on life as an openly gay grappler in the colorful world of professional wrestling.

The world of professional wrestling is essentially a comic book come to life: the over-the-top cartoonishness of babyfaces (good guys) versus heels (villains), the amazing athleticism of the performers involved, and the overall spectacle that makes pro wrestling wholly unique compared to other forms of entertainment.

But for something as flamboyant as wrestling, the men and women in the ring have to be true performers who believe in their characters. Otherwise, how can we, as an audience, be invested in the story? And just like any author, actor, or musician who gives everything they have to make a story believable, Terrance Griep—who wrestles under the nom de guerre Tommy “The Spiderbaby” Saturday—strives to do the exact thing. But he gets to wear tights while doing it.

“Having grown up reading superhero comics and having two completely developed selves, it really is like a secret identity, minus the secrets,” said Griep. “I sometimes think of Spiderbaby as this character, and then sometimes he’s just me.” 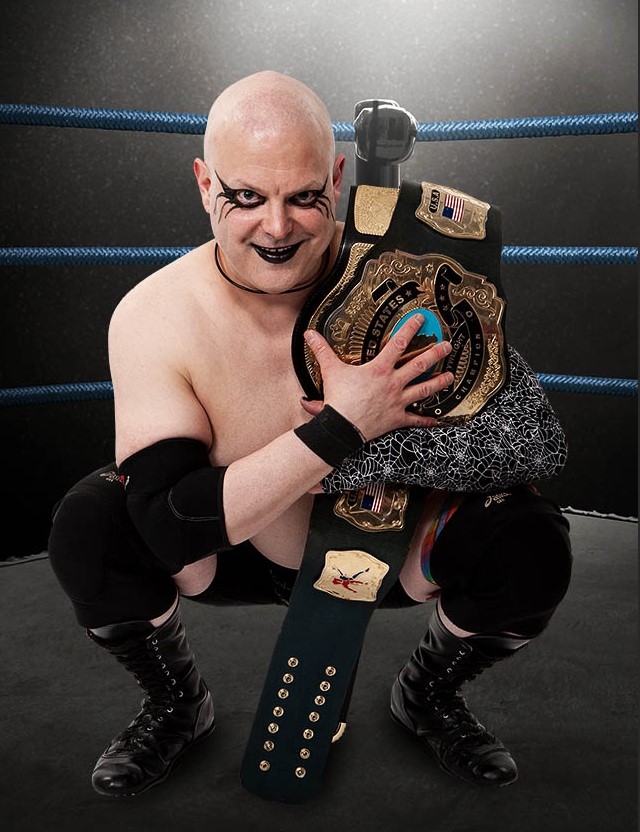 And that very comic book-like motif of dual natures comes naturally to Griep, who, in addition to working as a Minneapolis-based freelance writer for various publications (including Lavender), has beefed up his resumé as a freelance writer for DC Comics. And like any true Renaissance man, Griep entered the world of wrestling in a rather unlikely fashion.

“I had worked as a writer for a number of years in the 1990s,” said Griep. “That was my full time gig. And my main source of income suddenly went away, and I had to scramble for more income. So it occurred to me I’ve never looked anywhere local here in Minneapolis.”

In the late 1990s, Griep discovered a local independent wrestling promotion called Midwest Pro Wrestling, which was in search of a color commentator, a role Griep immediately knew he’d be perfect for.

“Traditionally, the color commentator is a villain, and they’re for comedy relief,” said Griep. “So I applied, and the reason I applied (was) partly for a job, but I also thought in terms of networking, it’s a big deal when you’re a professional freelancer.”

Believing that working in TV as a commentator would be a great way to network with other television professionals, Griep took the job. But eventually, the idea of actually being a wrestler became an attractive one, and sought training from MPW. 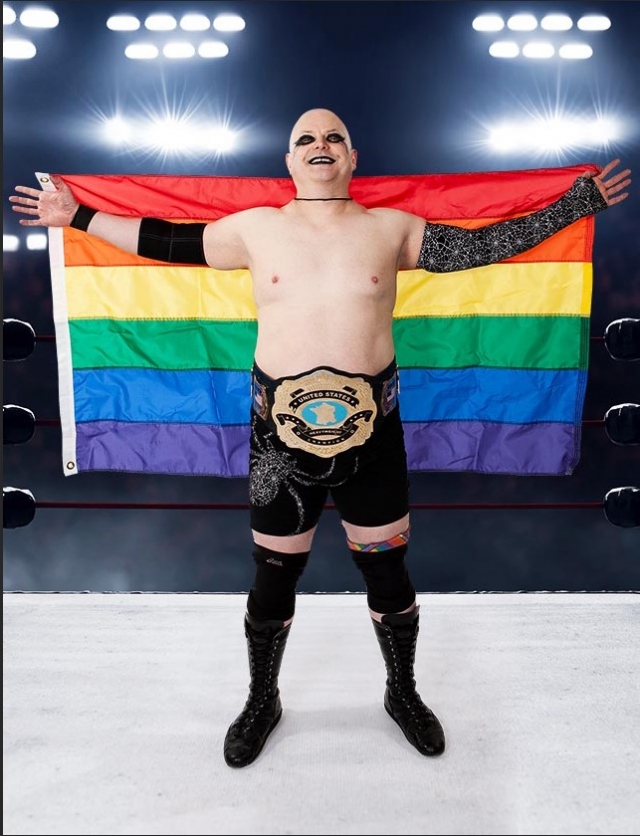 “So I bartered a year’s worth of promotional writing for the training; the idea being that I would just I would interview good guy wrestlers, insult them, and then get beat up in a way that would not actually hurt me,” said Griep. “And before we could do that, I had to have a match.”

Prior to his first match in November 2003, Griep came out of the closet, and was profiled by OUT Magazine as the first known openly gay person to actively compete as a professional wrestler. While there have been a number gay wrestlers in the history of the industry, most of them came out after retirement. Griep says he feels completely entitled to the distinction. And to him, the gig was just way too fun.

“When I had my first match, I came out before that first and I was covered by OUT Magazine,” said Griep. “And it turns out I had a proclivity for cheesing off large groups of drunken white people, which is wrestling gold. So for a while, I did both but eventually I just transitioned to full-time wrestling.”

So who exactly IS the Spiderbaby?

“Tommy ‘The Spiderbaby’ Saturday refers to himself as the world’s wickedest wrestler,” said Griep. “The Spiderbaby envisions himself as the second coming of The Undertaker. It’s a very vampire-like presentation. He always goes to the ring with his head covered, and then spits water in the air as he presents himself, and throws a rose into the audience.”

The Spiderbaby is well-versed in the art of cheating to get ahead, like any good ring villain would. And while the gimmick is played for laughs, the character isn’t in on the joke.

But like any sport, homophobia had sometimes been an issue for wrestling, either by way of stereotypical effeminate characters (usually played by straight men), or hostile fans. In over 15 years as a wrestler, Griep said that his experience as a gay wrestler has mostly been smooth sailing.

“When it became known within the industry what I was going to be doing, I had a guy in Pennsylvania who literally begged me not to do it,” said Griep. “He was so afraid for my health, just because you are in a super compromising position (where) anyone could do great, grievous damage to you if they chose to.”

Though he was nervous, Griep sallied forth, and the locker room reception after his first match was a welcome sight.

“I went to the locker room and everyone stood up and gave me a standing ovation, telling me that ‘We’re on your side,'” said Griep. “I get the ‘F-word’ once in a while, but the audience always tenses up and then I address it. Then one guy just wouldn’t back off of it. I got mad at him, not for the insult, but just because he was damaging the match because the audience didn’t know how to react.”

Luckily, the wrestling community has become far more accepting of GLBT people, both in and out of the ring. Aside from a growing number of openly queer independent wrestlers like Griep, larger national companies have made strides: World Wrestling Entertainment had their first openly lesbian performer in Sonya Deville, and the up-and-coming All Elite Wrestling hired Nyla Rose, the first openly transgender woman to sign with a major American promotion.

And for Griep, every match is just another day on the job. Currently, he is the Northern Lights Wrestling Heavyweight Champion, and he’s also the U.S. Heavyweight Champion for Independent Wrestling International. Having held 15 championships as a singles and tag team wrestler, the Spiderbaby has become a Minnesota wrestling fixture. And he’s done it by living his truth, face paint and all.

“The key, I discovered, is just to be yourself. Just do your thing,” said Griep. “Just show everyone you’re there for the same reasons they are. Lead through example and everything will just come and take care of itself.”

Spiderbaby- The Tale of the Tape