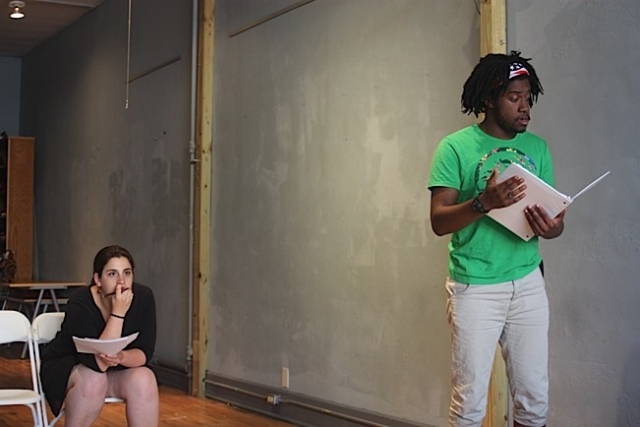 The accomplished feminist/queer theater troupe, Gadfly Theatre Productions, is presenting six plays at the Nimbus focused on horror and the macabre. The Final Frontier Festival: Horror peers into the mystical world of ghosts and gore in two sets of one-act plays.

Playwright Andrew Rosdail elaborates on his play featuring Daniel Flohr and Sarah Parker: “Belong Dead is part reimagining and part sequel to the Mary Shelley novel. In the novel -and most adaptations)- Dr. Frankenstein created a bride for his original creation under duress, fearing for his own safety or for that of his loved ones. This bride’s entire existence was to be a faithful wife to his monster. In the novel, the bride is destroyed before she has a chance to be brought to life”

“In the film, Bride of Frankenstein, she is nothing more than a screaming, terrified creature who is more or less mercy-killed by Boris Karloff’s monster In Kenneth Branagh’s movie, the bride is so horrified by her own existence that she decides to destroy herself. I initially began work on the play, wanting to explore a character that was more than just a hissing woman with a beehive hairdo or a self-immolating Helena Bonham Carter. I wanted my take on the bride to portray someone intelligent, compassionate, and who actually has a desire to exist.”

“The story told in my script has parallels to a possessive, abusive relationship. The Bride wants to exist in her own way, independent of Adam -the name given to Frankenstein’s monster in the play- but Adam only cares for what he wants; a companion that will stay with and follow him wherever he may go. Like the Abrahamic creation story, in which God created woman to be a subservient attendant, Adam feels that, since the doctor only created the Bride for him, she is destined to stay with him and be the faithful, dutiful wife for all time. He does not see her as an independent entity, but something that belongs to him, made for him. Without him, she is nothing. The Bride tries to escape this life, but Adam keeps pursuing. When the play begins, the Bride has had enough of running and looking over her shoulder and confronts her tormentor one last time.”

Cassandra Snow directs acclaimed lesbian playwright Carolyn Gage’s Lace Curtain Irish. Gina Sauer plays Lizzie Borden, infamous axe murderer. Snow shares: “One -person shows can get really stale or you can lose the thread and the purpose of them really easily, but Gage tells stories that are not only important but are interesting enough that you really only need one person to tell them. She easily incorporates humor into more somber material, and in this case, she takes someone with a huge secret that would be easy to demonize, an dmakes har a completely relatable, accessible character who we feel for, even in the end.” 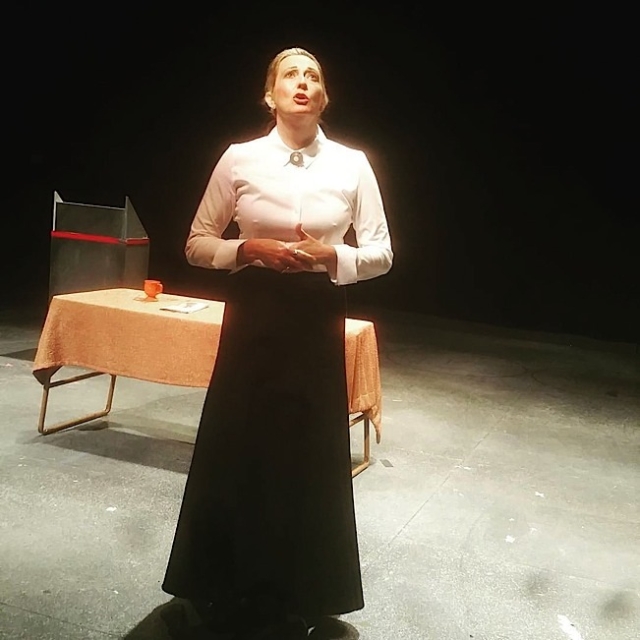 This one-woman show starring Gina Sauer is told from the point of view of Lizzie Borden’s maid during the gruesome 19th century Borden murders. Bridget Sullivan and Lizzie Borden’s relationship is unclear, but Borden herself has long been hailed as a secret lesbian icon. Famed playwright Gage imagines her as she most likely was–a rescuing butch trying to make it through life as a closeted queer woman, and imagines Bridget as she likely was–a woman struggling with PTSD and repressed memories, who may or may not have a guilty cross to bear.

Dr. Frankenstein made a monster. Later, the monster desired a mate. Now, it is the 21st century and both monster and bride struggle with their borrowed immortality and what we leave behind. This show is a feminist retelling of a woman created for a man, and the fragility of modern relationships. Starring Sarah Parker and Daniel Flohr.

In the fourth quadrant of an unnamed country rampant with civil unrest the government has issued a mandate in which all civilians who openly identify as homosexual are ordered to work camps or executed. In an abandoned cellar and operating theatre of a well-known surgeon and biochemist who has since been executed a young woman crosses paths with a soldier of this regime. This show, starring Adri Mehra and Hannah Jo Stein, features a transgender character fighting for her right to exist.

You’ll scream . . . with laughter. You’ll gasp . . . at the fabulous wigs. From the wickedly witty pens of Darrin Hagen and Trevor Schmidt, DRAGULA blends familiar elements of gothic thrillers with insightful commentary gender politics in a madcap comedy that will have you on the edge of your seat . . . with terror! Dragula’s feature cast includes Anthony Michaels, Felix Tomlinson, Shelley Johnson, and Ian Donahue

A two-character comedy that tells the story of a queer couple who — while exploring old houses for a possible bed ‘n’ breakfast site — make a chilling and gruesome discovery.  The show, which stars Hannah Jo Stein and Quinn Villagomaex, brings subconscious fears about queerness and commitment to the surface.

Each Friday night includes a post-show discussion about the set with representatives from each show.