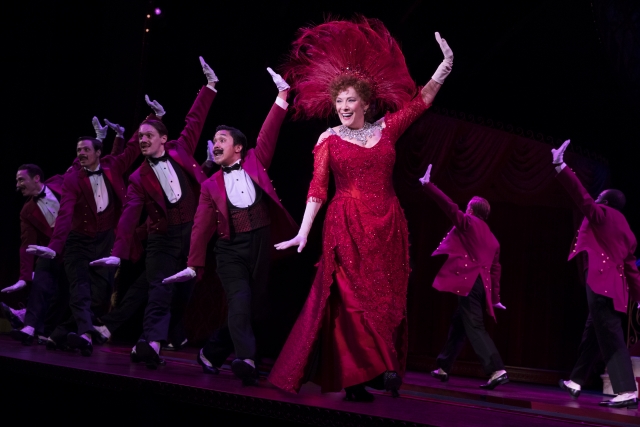 Life has a tendency to pull us toward resignation as we get older. For many people, major breakdowns are things that can bog one down for decades, if not the rest of one’s life. We lose our vibrancy, become unwittingly glib, and misread the actions of others, among other disempowering foibles. Such breakdowns include, but are not limited to, deaths of close loved ones, the end of a career, or enduring some dreadful or imagined trauma. In the case of Dolly Gallagher Levi, the title character, it is the death of her husband, Ephraim.

As an American woman of the late 19th century, Dolly’s particular belief system holds that mourning the loss of a husband should be a widow’s cross to bear for the rest of her life. However, such a grim tenet has caused her to rebel against the complacency her life now dwells in. As one of the musical’s most stirring numbers, “Before the Parade Passes By” lyrically proclaims:
I wanna hold my head up high
I need a goal again
I need a drive again
I wanna feel my heart coming alive again
It’s hard to imagine anyone more ideal for the role of Dolly than musical theater legend Betty Buckley. She won a Tony for Cats in 1983, was an Olivier nominee for Sunset Boulevard, and played Martha Jefferson in the original Broadway production of 1776. What a career history! What a woman!
Buckley is also an Emmy, Saturn, and Grammy nominee. She is also memorable for her roles in such 1980s film masterworks as Bruce Beresford’sTender Mercies and perhaps Woody Allen’s most underrated picture, Another Woman. Not to mention, the gym teacher in the Sissy Spacek horror classic, Carrie; and her steady role as Abby in the television series, Eight is Enough.
In Hello Dolly!’s Best Revival Tony-winning production now onstage in a national tour at the Orpheum, Buckley apprehends the urgency of the woman’s post-midlife crisis. She inhabits that consciousness, body and soul. She delivers Hello Dolly! for what it is: the brainchild, or perhaps it’s better to say, the heart-child of two gay men. Jerry Herman’s 1964 musical is based on Thornton Wilder’s 1954 stage comedy, The Matchmaker. It’s clear that Herman, who is still with us, had to have married his very spirit to Wilder’s because Hello Dolly! captures the pure essence of Wilder in spirit, language, lyrics and contours. His musical permeates with Wilder’s sensibility. Director Jerry Zaks magically infuses this marriage of minds into this joyous revival.
Buckley’s Dolly is perfectly matched with a perfectly curmudgeonly Lewis J. Stadlen as the wealthy, stingy merchant she seeks to snare, Horace Vandergelder. He embodies a classic male sense of armored stodginess. That said, Stadlen enchants with what sometime sounds like echoes of the delightful ghost of the lovable Jimmy Durante. There’s vaudevillian edge that adds splendidly to his performance—a nod to the popular theatrical style of the musical’s era.
Furthermore, the rest of the cast is on a par with the superlative romantic lead veterans: romantics who are well into middle age it should be noted. The leading duo is contrasted with young romantics. Vandergelder’s young exploited employees, Cornelius and Barnaby, as played by Nic Rouleau and Sean Burns, are absolutely darling and the way Burns kicks up his heels in musical numbers is absolutely endearing as he makes his way through New York to finally kiss his first girl. Hello Dolly! captures the innocence and sheltered life led by so many at the time.
It also addresses the limits placed on females. Analisa Leaming is vivacious as spunky milliner, Irene Molloy. Not only does she have a voice, marvelous and strong, but she conveys a clear sense in her spoken delivery about the stigma against working women of the time.
This Hello Dolly! also gifts us with a comic revelation in Kristen Hahn as Minnie Faye, the painfully insecure sidekick milliner of the boldly confident Irene. Hahn brings a touching fragility coupled with a palpable sense of  attraction-repulsion toward the human male animal. Of course, we know early on that Fate and the angels will connect her with Barnaby.
Santo Loquasto’s scenic and costume design explodes with color and Americana sumptuousness. An expressionistic approach set image approach in the court room scene that you won’t see in the 1969 Oscar-winning film version is stunning. When the musical’s emblematic staircase in the famous red-drenched Harmonia Gardens Restaurant segment first appeared the night I attended, audience members broke into applause. Truly gorgeous. My only nitpick is that the dancing men were, by and large, too young for the roles as geezers who had served there decades before when Dolly lit up the place. Nonetheless, these young guys are still simply fabulous!
The wonderful ensemble guided by Warren Carlyle’s choreography uncannily evokes the body language as we’ve seen in pictorial renderings of the era—the human spirit bursting out of that formal clothing, what Herman’s lyrics call “your Sunday Clothes”. Robert Billig’s music direction reverberates with jubilation. In a time when too many are wallowing in feelings of victimhood, the gay-generated Wilder-Herman spirit of resiliency and renewal floods the Orpheum house.
Hello Dolly!
Through Apr. 28
Orpheum Theatre, 910 Hennepin Ave., Minneapolis
(800) 982-2787
www.HennepinTheatreTrust.org