A Nice Change Of Pastry 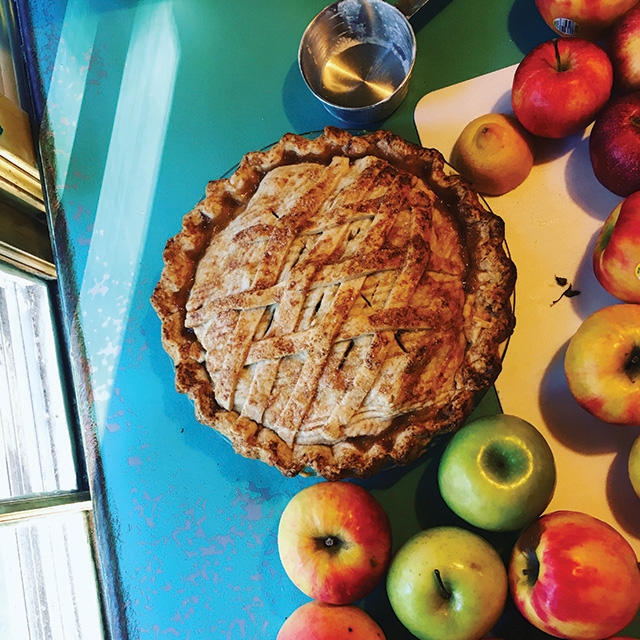 Pie & Mighty offers pies in 7-inch and 9-inch sizes, and are handcrafted and made one at a time. Photo courtesy of Pie & Mighty

A tendril of an aroma wafts out of the basement of a church in Powderhorn. It wraps its way around the neighborhood, near Lake Street, beckoning like something out of a Tex Avery cartoon. Inside the building, a knotted red bandana and tied up apron indicate it’s business time for one radical church lady. Rachel Swan is making pie.

As much this is a story about pie, it’s also the kind of love story that doesn’t get told enough. The truth of a long-lasting relationship. This is more than a sweet-stuffed meet-cute.

Swan spent most of her career in hospitality. For years, she poured her heart and soul into running the front of house for Ann Kim at her wildly popular Pizzeria Lola. (Swan’s a dedicated thrifter and many of those adorable plates came from her treasure hunts.) She’s also a seeker, a passionate life-liver who has lost a lot of people she cares about. Life like that, the giving and the supporting of others, it can wear you out.

When faced with a personal tragedy involving her mother, Swan decided enough was enough with the hospitality, and headed to an Episcopal church and immersed herself in that community. She worked day and night and rarely left. One day, when walking into a ceremony inducting a new woman into the church clergy, she spotted a familiar face in the pews, Ratchet. They’d met years before at a dinner with mutual friends at Erte. 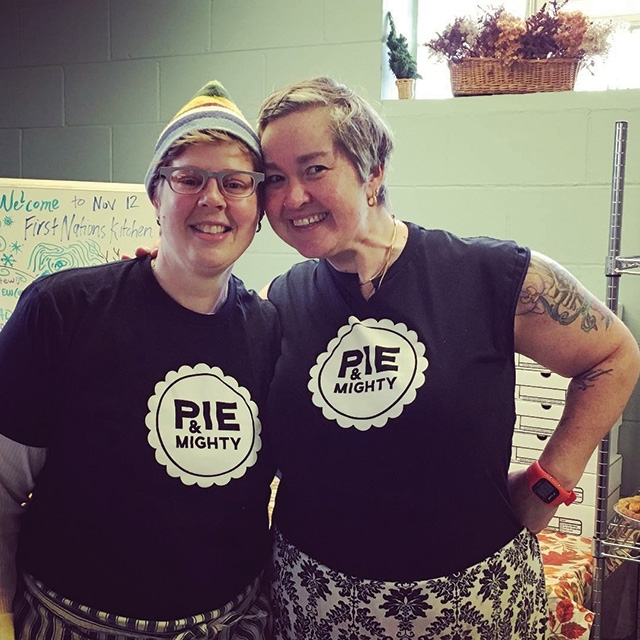 Rachel Swan and Karen Mattison are the proprietors of Pie & Mighty. Photo by Lynn Blankenship

Karen “Ratchet” Mattison is the other side of the personality spectrum in many ways: a planner, an educator;, incurably practical. The two met for drinks, Swan thought she might be able to recruit a new church member, but the meeting soon turned decidedly date-y.

“Oh, I have to get my shit straight,” Swan remembers thinking. Immediately they knew their connection was something special. She’s AC to her DC, they both found a balance that created an incredible foundation. They soon married, bought a house—did the whole deal.

Then the recession hit and their foundation began to shift. The huge house they had once loved became too much. Where it had once been filled with parties and people, grew cavernous and they were going underwater on that mortgage. 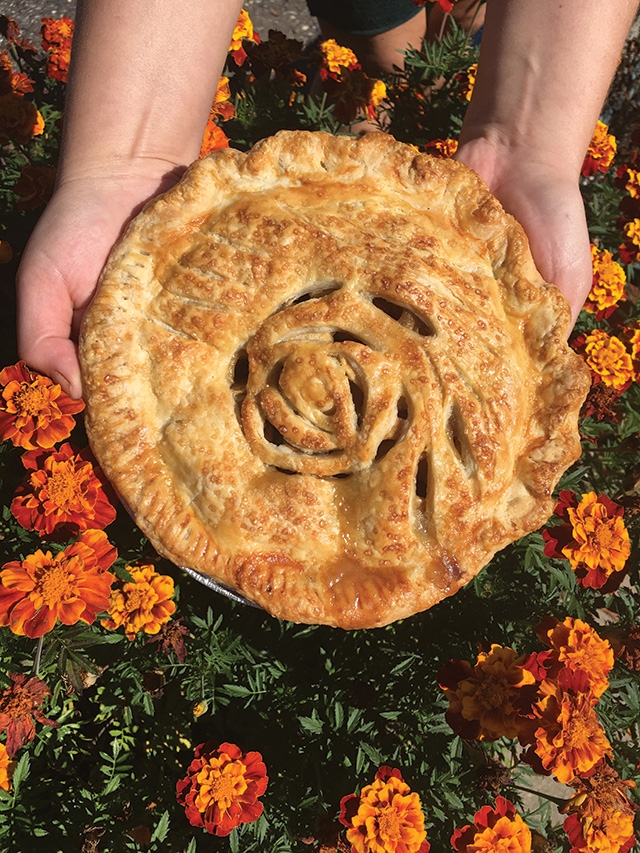 This is where we get to pie. Out from under that house, the women were suddenly buoyed and Swan had an idea. The people of this desperate and all too dark world needed pie. She began working with a pastry chef friend to open a storefront. She took to the mission with laser focus, hunting, scouting and trying to learn everything she could about the business, but one more wrench was coming their way. Her friend, the chef, the chief pie maker was suddenly hit with major life turmoil. She could no longer be a part of the dream.

Swan was left with a half finished dream: crushed, desolate. That is when you need your partner and that singlar true-belief love that comes from facing uncertainty together for years on end. Ratchet said, “You can do this.” Swan knew she could.

Thus began an epic quest to master the age-old art of pinching butter and lard into dough. “Most pie bakers learn how to do this from their grandmothers, women with giant, gnarled hands with the sense-memory of what this should feel like when it’s right. I didn’t have that.”

She traveled and she used her connections in the industry. Jordan Smith, owner of Black Sheep Pizza, was a friend and mentor in the process. “I baked so many crusts. Part of what he did that really helped was ask, ‘how much flour did you use?’ ‘Salt?’ ‘Well, why did you do that?’ It really made me look at every part of the process until I found my perfect crust.”

The superlative lard-and-butter-based crust is just the tiniest bit salty. It balances the sweet, seasonal bounty packed inside each pie.

When Smith launched his Storm King Barbecue, a takeout place that has since shuttered, Swan was the pie lady. Her pies, sold under the moniker Pie & Mighty, were a success.

Customers now sign up for the Pie Loop. Every week, Swan sends out a lively email to subscribers that is almost as much fun to read as the pie is to eat. Pie pick up is two days a week, at the church and again at St. Paul’s Black Market StP. Flavors change weekly and the emails read like the greatest Christmas card letter mom never wrote: filled with life updates (Ratchet just earned her doctorate) and GIFs.

The little business has been so successful that the two have nearly reached capacity for this chapter of the business. Pies sell out every week. Swan bakes like crazy, creating that irresistible perfume that permeates the neighborhood, while Mattison furiously folds and labels with pie boxes. The two are looking for a bakery space, but are also being very careful on how they grow. Right now, it’s going really well.

On pie pick up day, people’s faces light up, as the lid is lifted, their eyes feast upon the beauty within. It’s amazing what people will share at these small meetings: birthdays, graduations, death, illness, there are a million reasons for someone to order a pie. Each pickup comes with a deeply personal story and a humbly naked, soul-affirming glimpse at the heart of humanity.

“We just really want to get pie into the hands of everyone who needs one,” said Swan with a grin that sparks a shine in her eyes. “And everyone needs pie.”