A Magical “42nd Street” Brings in Da Funk at the Ordway 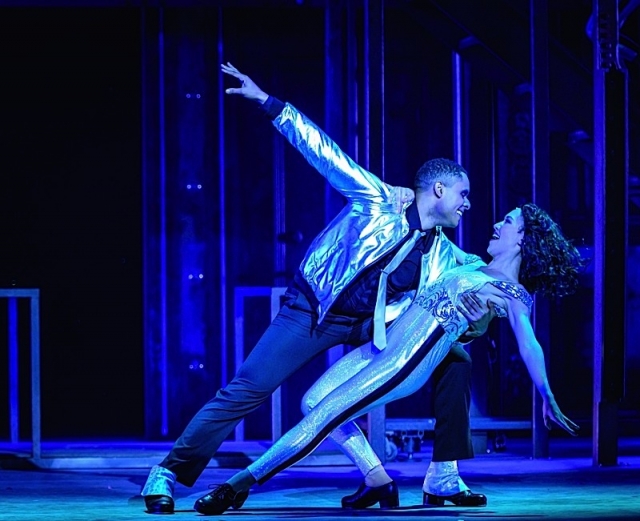 The Ordway has conjured a kind of musical comedy miracle with their original production of 42nd Street. This spectacular wonder is mystifying, in a good way. What on one hand began as a 1933 black-and-white film musical milestone in the early years of talkies, was written off as pablum forty odd years later. The films and plays of the Depression era had come to be carelessly written of by the anti-establishment zeitgeist of the 1960s and ’70s as bourgeois saccharine fluff. To the credit of gay subculture, nostalgic musicals on film and stage were seldom written off and their spiritual uplift was manna from heaven. 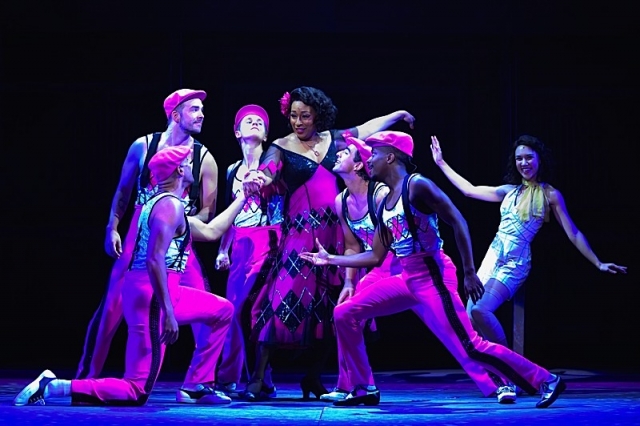 Fortunately, the stage version of 42nd Street which actually didn’t emerge till the 1980s with a book by Michael Stewart and Mark Bramble didn’t let that nostalgic stigma stop them and it became one of the biggest Broadway smashes of that era. The legendary Gower Champion was the director-choreographer who gave birth to the ’80s stage incarnation. Now at the end of the second decade of the 21st century director Michael Heitzman and choreographer Jared Grimes have re-imagined 42nd Street in contemporary terms with a diverse cast that beguiles with tap dance and vocal splendor. These actor-dancers-singers remind us that the dream for success on Broadway is universal and that quality is woven seamlessly into the enthralling Ordway Center for Performing Arts production. 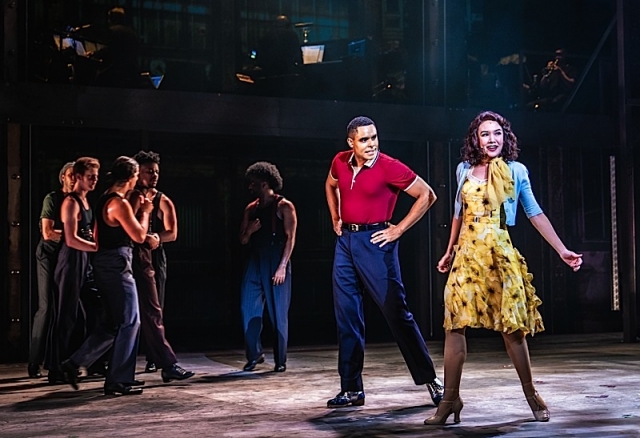 Jarrod Emick is magnificent as the callously tyrannical Broadway director Julian Marsh, yet finds poignant moments of self-reflection over how rage is eating his soul. Marsh’s armor is chipped away internally from being a man who calls upon thugs to get rid of those who get in his way to someone who recaptures the dream in time gone by as another musical created generations later tells us. Emick’s is a performance that conveys overt power while evoking numinous interiority, rendering forth nuance and emotionally subtlety that can be felt throughout the big Ordway auditorium space. Proof that he is a masterful stage actor.

A terrific Kimberly Immanuel embodies Peggy Sawyer, the emblematic small town girl, whose yet-to-be realized potential is what we root for throughout. Immanuel’s portrayal delicately unfolds as a child blossoming into adult consciousness while keeping her values and ideals intact. 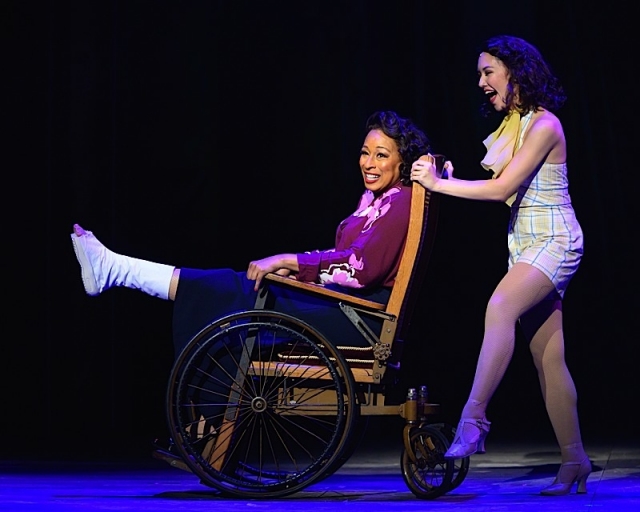 Tamara Tunie is glorious as Dorothy Brock, the diva who can’t face the fact that she’s not the young supple woman she once was. That said, Tunie’s vocals border on the phenomenal. The character’s illicit affair with Pat Denning is played interracially with a wonderful Tyler Lueck. Denning is just an ordinary guy at the effect of men in power, just as the women are. His dilemma tugs at the heart throughout the show as both the woman he loves and the men in power thwart his happiness. Young Peggy actually sees through this—something that makes us like her all the more. 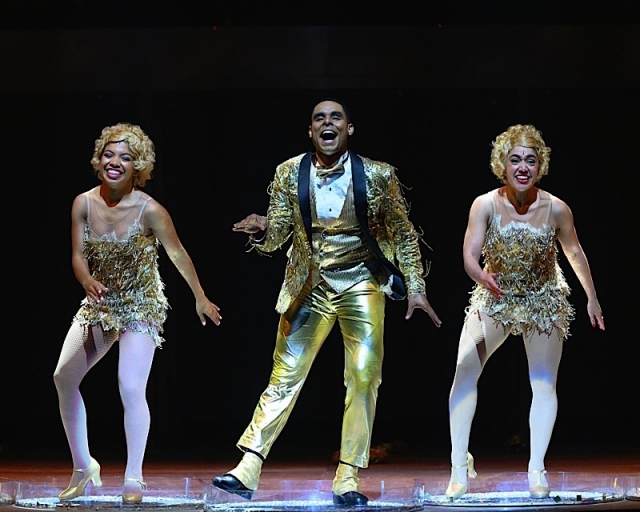 Brock has settled for well-to-do Abner Dillon, played with deliciously comic pomposity by the iconic T. Michael Rambo. Dillon sees her as a trophy. A classic case of an insecure man who derives his value from being seen with a beautiful woman idolized by the public. She’s his human shield. Yet again, another shard of poignancy built into the script. Like Marsh, Dillon has a way of manipulating his power over other men and women.

Another icon given a chance to shine, and boy does she ever, is the indefatigably effervescent Jamecia Bennett. As Maggie Jones, the handler who keeps everyone’s spirits up, she shines like a beacon. Recall that Bennett was named Lavender‘s Best Musical Actress for Get Ready at Penumbra Theatre a dozen years ago. And that voice is still as dynamic as ever! Wow! 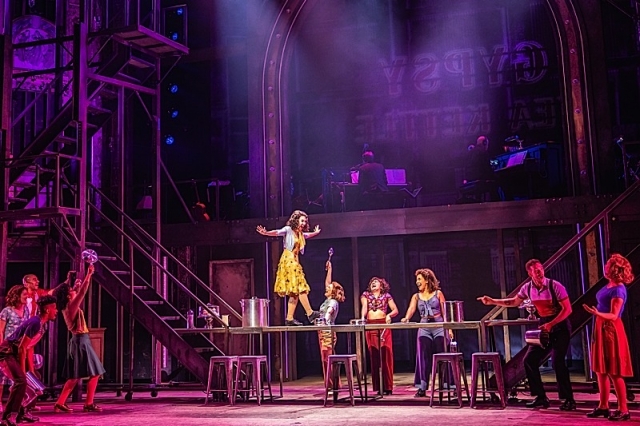 The glittering jewels in the crown of this breathtaking production are the many ensemble dancers whose tap dance greatness choreographed by Grimes borders on the overwhelming. Grimes’s genius echoes that of the gigantic Broadway sensation of a generation ago, Savion Glover, whose historic choreography for Bring in ‘da Noise, Bring in ‘da Funk in the ’90s is frankly every bit as important as the legacy of its musical contemporary that has come to overshadow it, Rent. Both works are renowned for their depictions of poverty and what is sometimes called “street smarts”.

Flash back to the 1930s where 42nd Street’s indelible tunes by Harry Warren and Dubin were quite intentionally conceived to entertain, give hope, and lift the spirits of the Depression Era audience where bread lines were common. “We’re in the Money”, exuberantly performed on the Ordway stage, is not a careless call for greed and selfishness. It’s a means through which dreams can be attained and wealth can be spread. “Lullaby of Broadway” is not cheaply sentimental. As you hear Emick begin it, the song swells into the rest of the ensemble and becomes like a cradle of hope in an anxiety-driven world where poverty snaps at everyone’s heels. 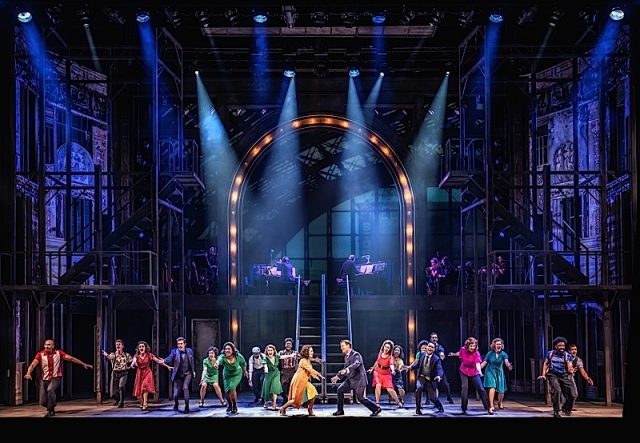 Raymond Berg’s music direction, orchestrations and arrangements by Everett Bradley, and Heitzman’s husband, music supervisor David Holcenberg, have majestically fused the original music with the saucy funk-jazz sound the production has been noted for. That sound really took off in the ’90s when what was called the “street aesthetic” swept the performance world with groups like Tap Dogs and STOMP and productions like Bring in ‘da Noise, Bring in ‘da Funk and Rent. What’s remarkable is how that legacy has been shaped organically into 42nd Street. This may well be of theatrical milestone significance that the 1933 film was for cinema.

On a final note, the magic sparkles further with luminous golds, lavenders, and more through Mike Baldassari’s lighting extraordinaire!