A Kaleidoscopic Vision from Frank Theatre: Love And Information 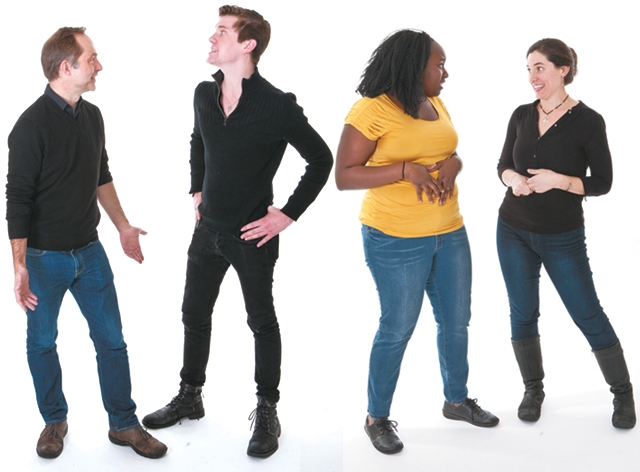 A cast of 14 actors is captivating audiences as multiple characters in over 50 scenes at the Ritz Theater. Frank Theatre’s production of Love and Information by Caryl Churchill, perhaps the greatest living playwright, is like a stage facsimile of the sound and sight bites that flood media and the internet. The scenes briskly, crisply flash onstage and retain their own individually texture, then onto the next one. It’s a dizzying but dazzling experience that measures the social barometric pressure of our time.

Brilliantly and variably costumed by Kathy Kohl and a sumptuous memory-triggering sound design by Dan Dukich we are transported to short scenes that involve topics as varied as love and deception to animal cruelty, ageing and gay concepts.

Leif Jurgensen plays a paranoid closeted gay or bisexual man who could be either a celebrity or politician in one vignette. A Elohim Pena is trying to soothe him as media hounds are outside the door waiting to get snap shots and video footage coming out of his love nest. Is Pena’s character a genuine lover or someone sent to entrap him: you decide. It’s among the most erotic scenes ever directed in any production by the masterful Wendy Knox. Virginia Burke is devilishly juicy as a woman who seems to be having an affair with a woman, nicely understated by Taous Claire Khazem.

Jurgensen also plays a man of status dressed by his valet played by Sam Pearson. This short scene captures the essence of class division and a homoerotic undercurrent. One wonders if this was intentional or if perhaps homoeroticism infuses our world b

In what is perhaps the play’s most moving scene Katherine Ferrand plays the wife of a man (Gabriele Angieri) with severe memory loss. She passionately tries to make him remember and when she brings up the possibility of lovemaking he shames her, not realizing this is the woman he has made love to several times in the past. Ferrand, Kohl, Knox, and Burke have been named in past years as Lavender’s Best Artists of the Year.