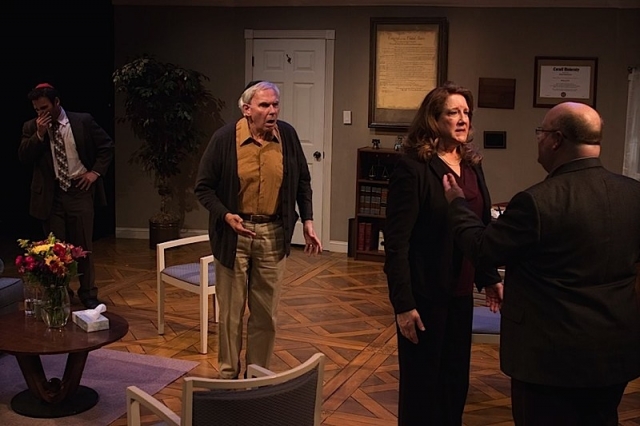 Denial by playwright Peter Sagal is a searing examination of a man who spreads the falsehood that the Holocaust never happened, and the Jewish attorney who takes on his case because she believes in the primacy of the U.S. Constitution. Free speech and expression are paramount to this woman. Some might even call her a constitutional originalist, which may be what draws a particular client to her.

Segue Productions has mounted an absorbingly hypnotic production directed by Jimmy LeDuc at Gremlin Theatre. It surgically probes the various arguments and manipulations that Sagal constrains us to consider with a superb blend of intellectual and emotional power. In our time when so many only track and align with viewpoints they identify with, whether on the right or left, Denial is a firm reminder that revisionist history sprung from prejudice can have dreadful ramifications. It also glistens with insights in ways that scripture is used for both good and ill.

Muriel Bonertz leads a dream cast in a brilliantly penetrating performance as protagonist Abigail Gersten, a Jewish attorney who accepts the case of a professor whose private records have been unlawfully seized by Uncle Sam. For her, this is clearly wrong. Pure and simple. Gersten gets in her gut that letting one’s emotions overrule one’s mind is a recipe for illusion. And she sticks to that.

What makes her antagonist, professor Bernard Cooper, a unique challenge is that he has become an underground icon for those who think the Holocaust was a hoax. Cooper has crafted and honed the fantastical idea that FDR’s Treasury Secretary Henry Morganthau Jr. was part of a nefarious Jewish disinformation plot and in promoting that lie, he has smeared the bona fide historical fact that Jews were in actual fact systematically targeted, victimized, and ultimately mass murdered in excess of six million souls by Germany’s Nazi Party under Adolf Hitler. 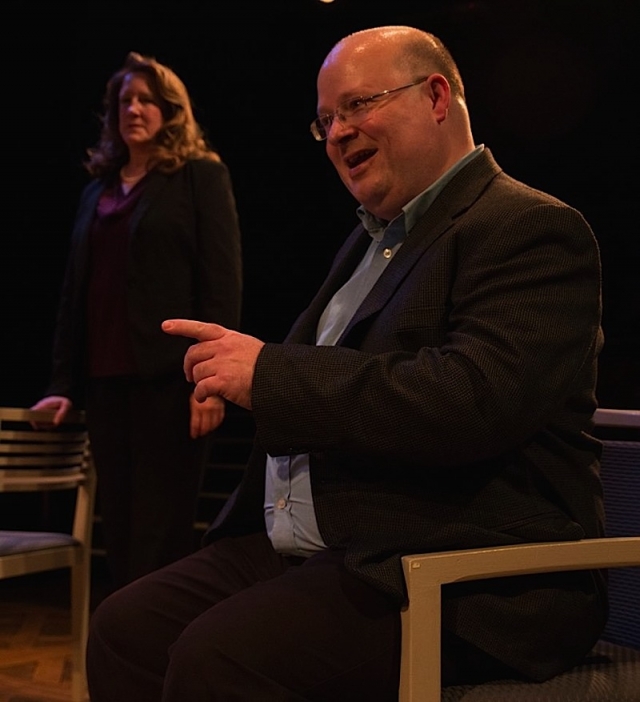 Andrew S. Troth approaches Cooper as a middle-aged, middle class white man, reminiscent of a lovable uncle at a family reunion. His is a truly fascinating performance, rendered with measured gravity and a cuddly sense of phony reasonability. Troth smoothly evokes a lowkey persona of a man shrewdly manipulating a case for his colossally misguided agenda. He peddles a fiction that can cleverly seduce those who lack a textured view of history. Troth tantalizes us in his portrayal. Does Cooper really believe this, or is he using his extremely cerebral way of thinking as a way to impress the less learned in order to satisfy an uncontrollable ego? He has an almost infantile need to win.

However, what Gersten understands is that in proceeding with a public trial, there is a perilous probability that Cooper’s illusions will get a broader gullible audience they never would have, had they just stayed underground. She thinks that the wiser path is for the FBI to just drop the charges and admit among themselves that their invasion of privacy was a bridge too far anyway.

Gersten understands that the publicizing of an incendiary antisemitic narrative could actually increase anti-Semitism on a wider scale. She knows that public concern over Cooper’s First Amendment rights could very well backfire. She further realizes that his private papers, being unlawfully confiscated, could easily make the Feds look like a cabal of jackbooted thugs.

Sagal beautifully contrasts Denial’s generational attitudes as he fleshes out the play’s dilemma. He writes with evenhanded complexity and not like a firebrand or a guilt-tripper. He actually calls on the audience to beware the firebrand impulse. Such impulses are exposed by the playwright as being recklessly counterproductive. This is especially evident in Adam (Avi Aharoni), the zealous young federal agent, himself a Jew, and Gersten’s young assistant, Stefanie (Jada Beulah). Both young adults are educated, highly intelligent, and operate out of righteous passion.

Denial was written in the early 1990s, which is also the time in which the play is set. Adam and Stefanie are precursors of the social justice warriors of today—crusading against the bad guys but failing to understand the importance of taking in new information, which comes back to bite as the play unfolds. These two crackle in their roles—each finding startling moments of numinous awareness. To each their own painful epiphany as they ultimately come to see how sometimes there are factors lurking beneath the surface.

To dispell the surface viewpoint means to seek, in a spirit of integrity, a more layered comprehension of just how problematic concentration camp life was. Sagal is painfully aware of the vulnerability among those interred and terrorized in Nazi camps vs. the sadistic power dynamics that operated with naked ruthlessness and exploitation. In the past three years two superlative films, Son of Saul and Paradise, address that, as Denial, written almost a generation ago, does on stage. Nowadays it’s a timely message, when so many are pointing their fingers where they are so certain the blame should be falling regarding any number of sociopolitical issues. When Sagal wrote Denial in the ’90s there was a fear of anti-Jewish militia groups festering in rural parts of the U.S., as well as increasing antisemitism and anti-Israeli sentiment in the Middle East. He surely must have been aware of how vital it is to keep a level head in the face of awful possibilities.

Denial plumbs the depths as two elderly Holocaust survivors are brought into the mix. Their interaction reveals how the death camp set-up forced prisoners to make agonizing choices. William P. Studer and Duane O. Koivisto are utterly devastating in these roles, as they take the audience to that point of questioning just how any of us might behave in the same circumstances. These two actors are simply heartbreaking as they expose the twisted nature of the cruelty of those who held power over them.

What Gersten understands more palpably perhaps than anyone else in the play, is that we all have the potential for evil. Political philosopher Hannah Arendt (Eichmann in Jerusalem: A Report on the Banality of Evil) understood this and to this day her views are resented by some, in the same way Gersten’s views come to be within the world of the play. What’s notable in the course of Gersten’s character arc is that she becomes even wiser and more knowledgeable for having faced the courage of her convictions.

Unfortunately, in a fallen world, such wisdom and courage are too often not appreciated as they should be. Bonertz conveys this to haunting effect. She brings to mind classic portrayals of highly intelligent women made to face existential truths, like those rendered by Ellen Burstyn and the actresses of Ingmar Bergman and Woody Allen’s dramatic films. Moreover, LeDuc’s entire cast probes inner recesses of the human soul to an extent seldom seen on stage.