A Home Run For Diversity 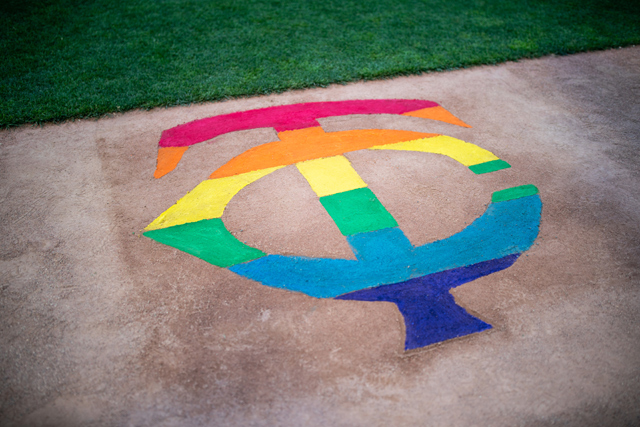 Photo courtesy of the Minnesota Twins

Professional sports franchises have been making strong efforts to not only reach out to GLBT fans and spectators, but to make their franchises a diverse and inclusive environment for their GLBT employees as well.

For over a decade, our own Minnesota Twins have been at the forefront of GLBT diversity and inclusion, and the Twins’ senior director of diversity & inclusion strategy Miguel Ramos said that the franchise began this initiative about twelve years ago to expand on the GLBT outreach work they were already doing.

“It’s not that they weren’t doing anything, but they knew they could do better,” said Ramos. “So at that point, the Twins started to think about the best way to do this, and one of the ideas was, ‘How can we work together to make sure D & I isn’t something that we only concentrate on one day or one event, but what do we need to do to make sure we show our authenticity all year? How can we show that we are for real?'”

Ramos said that before any work commenced with D & I, the Twins needed to go to the community and make sure that both sides had a mutual understanding of one another.

“Specifically, with the LGBT community, I remember everyone was pushing us to have a Pride Night,” said Ramos. “Again, I thought, ‘If we do Pride Night and that’s it, it felt like were checking a box’. So what we decided was before we do anything, we needed to start to work with LGBTQ people in the community and understand their need. We need to build that relationship and that’s what we did. We started to work with different LGBT relationships for around three years before we even held a Pride Night.”

In addition to their annual Pride Night, the Twins work year-round with organizations such as Gay For Good, Quorum, and the Twin Cities Gay Men’s Chorus.

“One of the things we also do is work in partnership with [the Twin Cities Goodtime] Softball League,” said Ramos. “We’ve worked with them during their Hall of Fame celebration, but more importantly, they asked us if we could come with them to Ohio to support their bid for the World Series in Minnesota.”

“We were more than happy to be there with them and be the first MLB team that supports this national organization,” Ramos continued. “This was a high honor for us, and we jumped at the opportunity to publicly support them.”

Twins call center senior coordinator Chris Frogge said that the Twins have gone out of their way to treat their GLBT employees with respect and appreciation.

“Since the day I started with the Twins back in 2010, I have always been made to feel truly accepted exactly for who I am,” said Frogge. “The organization has a culture not of tolerance, but of acceptance. I never once had to refer to my husband in neutral terms due to concern that we may not be accepted, and we are treated the same as any other married couple in the organization.”

Frogge said that employees are encouraged to bring their authentic selves to work every day.

“I feel in the past it has been difficult to attract LGBT+ talent due to the perceived stigma that we would not be accepted in the world of professional sports,” said Frogge. “While that is not the case with the Twins, we still need to get beyond that fear. We have begun reaching out to partners like Quorum to help us get the word out when we have job opportunities so people know that everyone is welcome.”

Twins community relations coordinator Chelsey Falzone concurred with this sentiment, stating that the Twins values their employees, GLBT or otherwise.

“Honestly, I’ve spent a few years closeted at work because I didn’t want to have those hard conversations,” said Falzone. “I thought it was simply easier to keep my head down, work hard, and not let anyone know who I really was. I thought it didn’t matter. In some ways it really was easier to hide, but in a lot of ways, it weighed so heavily on me.”

Today, however, Falzone says she’s in a role where it’s her responsibility to love and serve people in all communities, and every part of her identity helps her do that more authentically.

Amateur scouting coordinator Brit Minder likewise said that she had many examples of coworkers embracing her professional and personal lives.

“I think the important thing for me is that it looks like being treated the same as everyone else,” said Minder. “It looks like my coworkers asking me about my weekend (and my girlfriend). It looks like one of my favorite coworkers teasing me about not being into Valentine’s Day…It’s my scouts meeting my girlfriend and I at various stops on our road trip to California and back: coffee, double-date, dinner etc. Very normal, human things.”

“My comfort and relative openness is the byproduct of a culture that has been around the organization for a very long time, and I hope will continue to be,” Minder added.

“The Minnesota Twins believe life is better with baseball,” said Twins president and CEO Dave St. Peter. “To that end, the Twins franchise is committed to using baseball as a platform to bring all communities together. Inclusion is central not only to our organization’s ability to more deeply connect with an incrementally diverse world, but also to our employees’ ability to thrive and succeed.”