A Haunting Biopic on the Wages of Free Love – “Mary Shelley” at St. Anthony Main 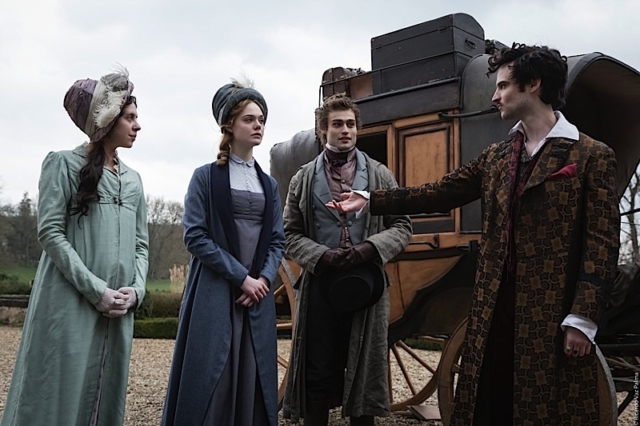 We sometimes get caught in a bubble where we think that the Sexual Revolution of the mid-20th century was the Be All, End All of sexual freedom. However, human history contains various eras of sexual liberality in co-existence with punitively restrictive attitudes. One such time was the early 19th century before the reign of Queen Victoria. The American and French Revolutions that erupted in the later decades of the 18th century created an atmosphere of freedom that moved into all spheres of thought, including those of gender and sexuality. In 1892, England’s Mary Wollstonecraft completed A Vindication on the Rights Woman, a landmark of feminist philosophy and a vital indicator of the conditions and attitudes toward women of that time.

She died days after she gave birth to a daughter, also named Mary (1797-1851), who wrote what is considered not only one of the greatest books ever written by a woman, but one of the most groundbreaking books ever: Frankenstein (1818). Modern and postmodern science fiction, and the scientific imagination itself, owe an incalculable debt to her.

Elle Fanning gives a brilliant performance in the title role of the film, Mary Shelley. She moves and interacts with a fluid grace and dignity like a noble soul making her way through the rocks and clefts of Hades. Fanning is moving as a figure caught in the malevolent crosscurrents of her time, when idealism was at odds with harsh realities of nature and economics. This devastating picture has been directed with exquisite historical style, matched with deep sensitivity, by Haifaa al-Mansour.

Emma Jensen’s screenplay is a masterwork in itself. She has captured, without gender prejudice, the way in which the dream (myth?) of Free Love works for men and can deceive women. She does not write from an agenda or a puritanical denunciation of either men or sexual expression. Rather, Jensen reveals wisely how the relishing of pure instinct under the sweeping assumption that love lives inherently within everyone, can be a potential recipe for disaster. Non-monogamy sounds good in theory when Mary is introduced to the idea. But in practice, it may not necessarily work. Nor was it what she thought it would be. To this very day, the issue is controversial, but as the film Mary Shelley reminds us, that controversy didn’t start in the ’60s. 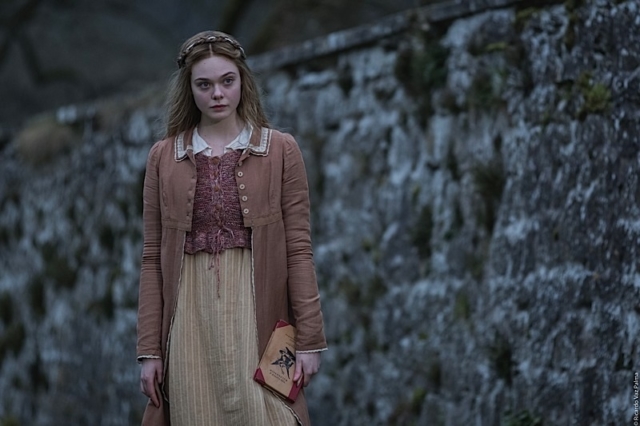 Free Love is the gospel of the Romantic Era poet, Percy Bysshe Shelley, who shifts Mary’s life into a torrential breakdown—personally, financially, and socially. The criminally handsome, almost too-pretty-by-half, Douglas Booth, is extraordinary in the role. (Think of a male version of Helen of Troy.) But Booth is a first-rate actor as well. He reveals a man genuinely unconscious of how his libertine selfishness is cloaked in lofty rationalizations about being true to one’s self. He states: “It is an intolerable tyranny to bind a husband and wife to cohabitation after the decay of their affection.” Of course, this is indeed, a profoundly real dilemma to be reckoned with. But when does rejection of social norms trample detrimentally on the lives of others?

For instance, William Godwin (an excellent Stephen Dillane), Mary’s tough-loving father: “He claims to love humanity yet forsakes his child.” And mind you, this refers to the child Percy fathered and whom he failed to tell Mary about when she fell for him. Having come from a background of anarchistic philosophy, Godwin has found that as he has aged, some of his younger notions no longer hold the water he thought they once did.

Joanne Froggatt, so sympathetic in Downton Abbey, is chilling as his judgmental second wife, Mary Jane Clairmont. This performance gives evidence that Jensen and al-Mansour are not suggesting that puritanical intolerance is a legitimate rebuttal to the Free Love ethos. In the spirit of the Godwin character, the writer and director seem to wrestle with the thorny issue of legitimately humane authority vs. authoritarianism.

Mary Shelley, the film, also reflects on the human body itself and is less about the occult than one might expect. We are made aware of the concept of galvanism, a re-animation of dead body parts, that was the theme of magic shows and scary tales of the time. The film also compels us to look at mistaking lust for love. This is played out to gripping effect in a subplot between Percy’s friend, Lord Byron, played with an astounding mix of repulsiveness and charisma by Tom Sturridge, and Mary’s half-sister, Claire Clairmont (a innocently saucy Bel Powley), who is grossly exploited by the man. The proverbial decadence of the upper classes is depicted viscerally and memorably.

Actor Ben Hardy touchingly contrasts this as John William Polidori, the physician and vampire writer who lives by principles and instinctively perceives the wrongs being committed against Mary. Hardy and Dillane demonstrate how writer and director have nicely balanced the overall portrayal of men, so that the male gender is not over-archingly demonized, as is often the case in film and plays. They linger in the background with an aura of goodness and virtue, in the face of depravity.

At least the self-deceiving Percy, for all his sins, wrote with the ideal of transforming the social order favorably. For example, he becomes aware of the injustice of Mary being unable to get Frankenstein published under her rightful name because of her gender. In contrast, Byron is portrayed as a hedonist utterly bereft of conscience.

Mary Shelley has been magnetically photographed with classical visual compostion by David Ungaro. Caroline Koener’s gorgeous costumes reflect the tension between the formal and the sensuous. Amelia Warner’s splendid music is hauntingly reminiscent of church music you might imagine in an old cathedral mixed with ghostly mist rising from a crypt.