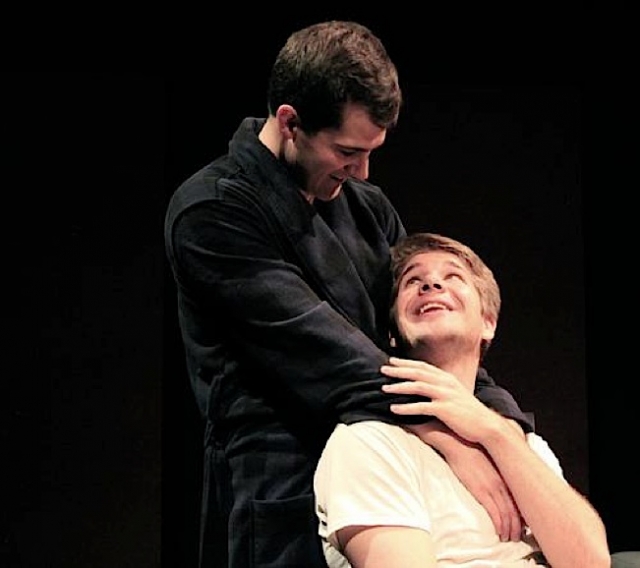 The tension between a closeted Born-Again Christian gay man and his older atheist partner comes to a head in Geoffrey Naufft’s 2010 play, “Next Fall”. When the younger Luke is critically injured in an auto accident his parents fly from Florida to see him in a New York City hospital where he lies in a coma. The action alternates between the hospital waiting room and flashbacks of the men’s four year relationship. It plays at the Cedar Riverside People’s Center, a BOOM! Theater offering directed by Patrick Kozicky.

Devout Luke (Daniel Flohr) has maintained a modestly successful acting career while Adam (Josef Buchel) has floundered in a dead end job in as a shop candle seller. Despite the fact that whenever the two finish having sex Luke is compelled to pray about it, hence, decimating Adam’s self worth, the pair genuinely loves each other. It should also be noted that Luke’s fears of damnation for Adam do not stem so much from the “sin” of gay sex but from Adam not being the least bit interested in accepting Jesus Christ as his personal savior. Flohr and Buchel shine through all that agony with touching intimacy, which reveals that the two characters truly and deeply love one another. The play and their performances demonstrate that love can sometimes be sustained even when there are profound differences between the lovers. 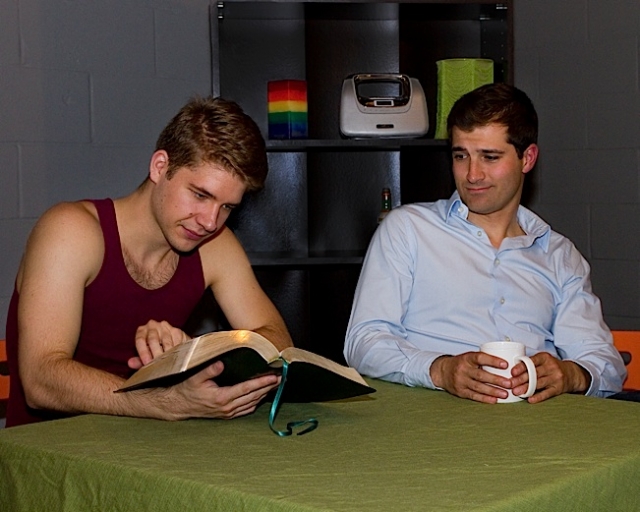 However, the driving conflict of “Next Fall” is caused by Luke having never come out as a gay man to his parents. This becomes a crisis for Adam because only immediate relatives have extended visitation rights for critically injured patients expected to die. The play is set in the 2000s and same sex marriage wasn’t legalized in New York state till 2011 so the the possibility of the two men being spouses, therefore, next of kin, was not possible.

This, in turn, sets Adam in conflict with Luke’s fundamentalist father, Butch (William Kirsch). However two other close friends of the gay couple, also waiting at the hospital, steer him from saying something too confrontational. Of course, Adam is enraged and anguished that he feels pressured into withholding the truth about his and Luke’s long term committed relationship and to add insult to injury, that he is sorely limited as to how much time he has to spend with his beloved.

The powerful Kirsch brings an understated hostility to Butch that is utterly visceral. He is splendidly contrasted by Julie Ann Nevill as Luke’s flamboyant mother, Arlene, who parted from her son in his childhood because of her drug issues. Nevill delights as she flutters and chatters in a way reminiscent of the hyper-expressive southern women of Tennessee Williams and Beth Henley. At the same time we feel maternal regret beneath the effervescence.

Amy Schweickhardt as Holly, Adam’s close friend, gives a probing portrayal of a woman trying to civilly navigate the tensions she finds herself absorbed in. Director Kozicky also plays the role of Brandon, Luke’s fellow closeted friend, who it turns out has been holding tight to a few fascinating secrets.

Kozicky’s direction finds sharp timing in every scene so that the production’s two hours and 15 minutes flies by. But his actors always keep the emotion organic and real. This is especially notable in a play that also contains hard hitting thoughts about religion, homophobia, and heterosexual privilege. Yet it unfolds as a beautifully human play rather than a political statement.

John Townsend: Next Fall got  Tony nomination for Best Play of 2010. Freshen our minds with what it’s about.

Patrick Kozicky: Next Fall follows the relationship between Luke (Daniel Flohr) and Adam (Josef Buchel).  Luke is a devout Christian, and Adam isn’t sure what he believes.  The bulk of the play focuses on how these two build a relationship with completely opposite views on religion.  Luke isn’t out to his family, and he struggles with finding a balance between his faith, and being gay.  Adam tries figure out how to meet Luke half way on his beliefs, and he looks to friends and family for support and understanding.  When a tragic accident happens, they are forced confront their fears and figure out where their faith really lies.

While Next Fall doesn’t offer any absolute answers, it raises questions about religion, and morality that I hope will inspire conversations.  The message that I take away is that we all have the right to feel safe and comfortable in our lives, regardless of our faith, race, sexuality or gender identity.  It’s okay to question each other in order find a deeper understanding, but when we start judging each other or making assumptions, we risk alienating entire groups of people.