A Gloriously Uplifting Film Comedy That Recalls the Bonds Between Gays, Lesbians, and Labor in the Thatcher Era / Edina Cinema Screens “Pride” 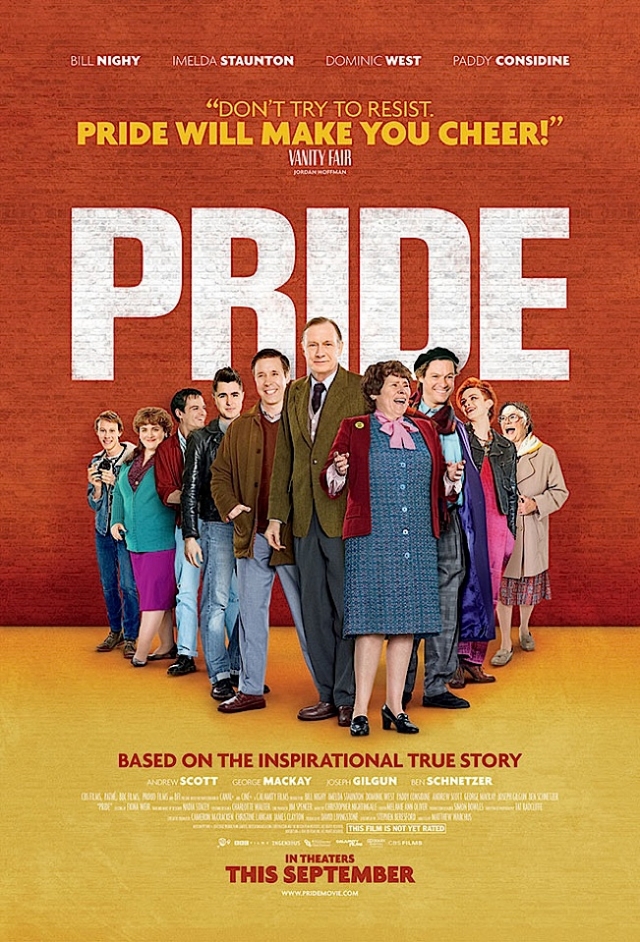 Prime Minister Margaret Thatcher, nicknamed “The Iron Lady”, declared government forcefulness against striking UK miners in the mid-1980s. At the same time the AIDS epidemic had begun to spread hysteria and British gay men were stigmatized by millions.(Homosexuality was decriminalized in the UK only as recently as 1967.)

Thatcher’s Conservative Party, the Tories, and the woman herself, are on record for antigay vitriol that was in grotesque alignment with what Christian Right-wingers were promoting in the US during our Reagan era. Therefore, public hostility against two very disparate groups – the gay and lesbian community, much of which was still club- and subculture, and trade unionists- was visceral. Rupert Murdoch had already come to control and steer the UK tabloid and mainstream press and took joy in conflating all enemies of conservatism as monolithic and logically united, which of course, was a myth.

In Pride, Matthew Warchus’s uplifting gem of a film inspired by actual events, a small cadre of London gay and lesbian activists raise funds to support miners striking in a small Welsh town. Its glitter and gloss meets drudge and despair. They are welcomed by a handful of townies but met with hostility from most. The film is about the thawing of those relations.

Ben Schnetzer shines as Mark Ashton, the G & L activist (this was before the B and T had become part of the acronym) who spurs his group to action and won’t be intimidated by rural homophobia. He’s actually not antagonistic though he can be rather outrageous. He wisely understands that both groups have a common enemy that wields dubiously constitutional media power to damage both of them. He sees that being allies could benefit both unfairly marginalized groups.

Ashton died of AIDS soon after the Welsh experience and Schnetzer touchingly captures the essence of a man in his mid-twenties who seems to sense he is living on a limited amount of time. It brings to mind the maxim to “live every day like it’s your last.”

The 1980s are captured vividly and the melting of collective egos between gays and lesbians and rural straights are powerfully portrayed. You may get goosebumps. The younger straight guys realize that the gay guys can teach them how to dance so that they can attract females. The lesbians illuminate the need for women’s perspectives regarding labor. There’s also a moving sense of rural men and women who are not homophobic being protective and even nurturing toward the London gays and lesbians. A scene where the Welsh women storm a London leather club with joyous curiosity, as opposed to puritanical meanness, is priceless. The great Imelda Staunton (robbed of an Oscar for Vera Drake) is part of that group. It should also be noted that there are gay London characters in the film who don’t like trade unionists.

Assimilationist gays and lesbians may be unsettled by the end of this film but those who don’t put assimilation at the center of their gay universe, will likely find it to be just lovely. This is powerful comedy with a profound sense of humanity. It relates an important chapter of glbt history to boot.

Note: Pride, the film, is not to be confused with a very different gay-themed British stage play, the superb The Pride by Alexi Kay Campbell, which does not share the themes of the film reviewed here. The virtue of Warchus’s film is that it fully addresses both gay and labor issues thanks largely to Stephen Beresford’s sparkling script. Regrettably, the title plays up to a limited gay audience when this ought to be a major crossover picture. Opportunity lost.