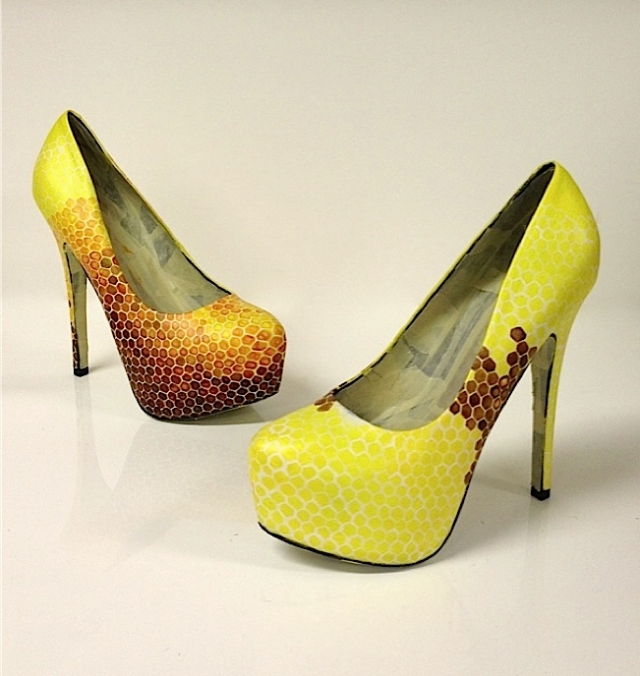 Traditionally, the artists would receive custom Minnesota Wild hockey jerseys, sticks, or posters. However, as performers began making third, fourth, and fifth appearances, the team had to come with new ideas. “We couldn’t give them the same thing we’d already given them in the past,” Bart said. “We wanted to get creative and really start tailoring the gifts for each individual artist.”

Bart’s team researches ahead of time in order to discover more about an artist or band, learning their hobbies, what they enjoy doing in their free time, or maybe what they enjoy eating, drinking or playing. From this research comes a brainstorming session to decide which gift would make an impact on the performer. Faced with the task of finding an idea for Lady Gaga’s February 6 appearance, the Xcel Energy Center team quickly got to work, settling on a pair of custom shoes made by Hourglass Footwear, based in Seattle. The company is a team of nine artists who hand-paint women’s footwear to order; customers choose a design and heel height or send in shoes they already own to be painted.

Kira Bundlie, originally from Minneapolis and the founder of Hourglass Footwear, was stunned to receive the email inviting her to participate in this project. “It seemed like a dream,” she said.

Her business partner, Lisa Strom echoed her thoughts, saying “once it sunk in we did some dancing and jumping up and down before calling an emergency brainstorming session with our artists for the next morning.”

After the initial shock, reality set in. Not just any design would do. “It’s a lot of pressure to design a gift that someone like Lady Gaga will be awed by,” Strom said. 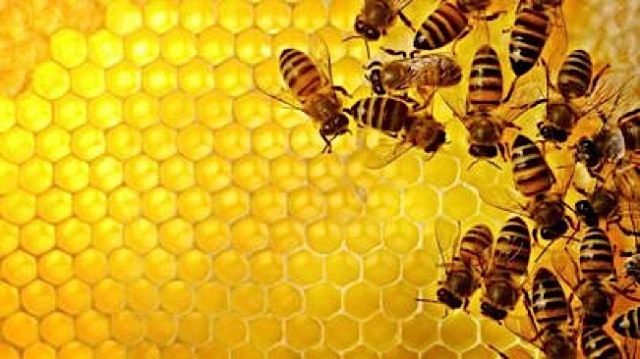 Hourglass artist Debbie Faas came up with the design of a honeycomb, symbolizing the Mother Monster as Queen Bee surrounded by her “swarms of fans,” as Bundlie put it. “I think it’s safe to say that her fan base (or community, really) is more intense and devoted than the fan bases of most other stars. They love and worship her, and she loves them right back.”

Faas’ idea was to realistically paint the shoes to look like actual honeycomb. “Very geometrically intricate and detailed, with swarms of realistic bees covering the heels and migrating toward the toes,” Bundlie said. “The warm, sexiness of the honeycomb and the glistening, sticky honey mixed with the unnerving swarm of bees is perfect for Lady Gaga’s beautiful/ugly aesthetic.”

In reference to Minnesota, one of the top honey producers in the country, the bees painted on the shoes will be Minnesota honey bees. Of her design, Faas said that she wanted to “push the illusion as far as it can go” with life-like painting. “I’d like to think that when she wears them, the honeycombs will look like they will collapse under her weight and honey will ooze out on the floor and the bees will scatter,” she said. 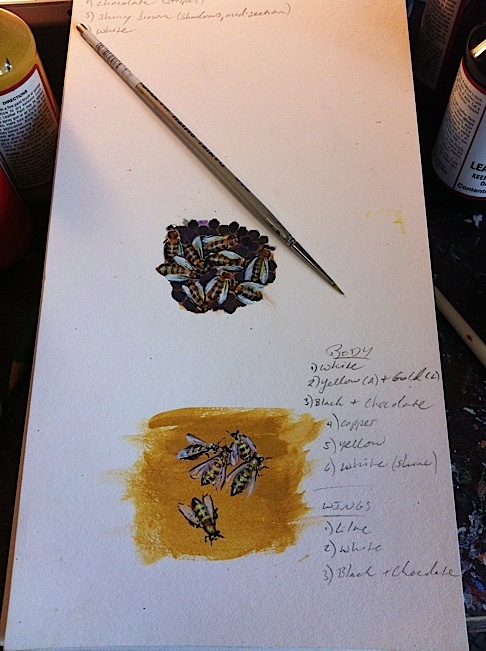 Bundlie mentioned how exciting it is to design shoes for such an influential celebrity. But as a lesbian, “being asked to design shoes for Lady Gaga, who is such a tremendous advocate for the GLBT community, is just that much more of an honor,” she said.

Faas, who also identifies as a lesbian, agreed with those sentiments. She said that when growing up she had no GLBT role models, so “her being an advocate for the fourteen-year-old me out there is further inspiration in itself.”

Hourglass Footwear has been up and running for six months as the result of a Kickstarter campaign and with a client as famous as Lady Gaga, the artists had to step up their game. “There is so much passion and attention to detail going into each brush stroke,” Strom said. Typically, Hourglass artists will spend between one and three hours painting a pair of shoes, but Gaga’s pair will take two full weeks. 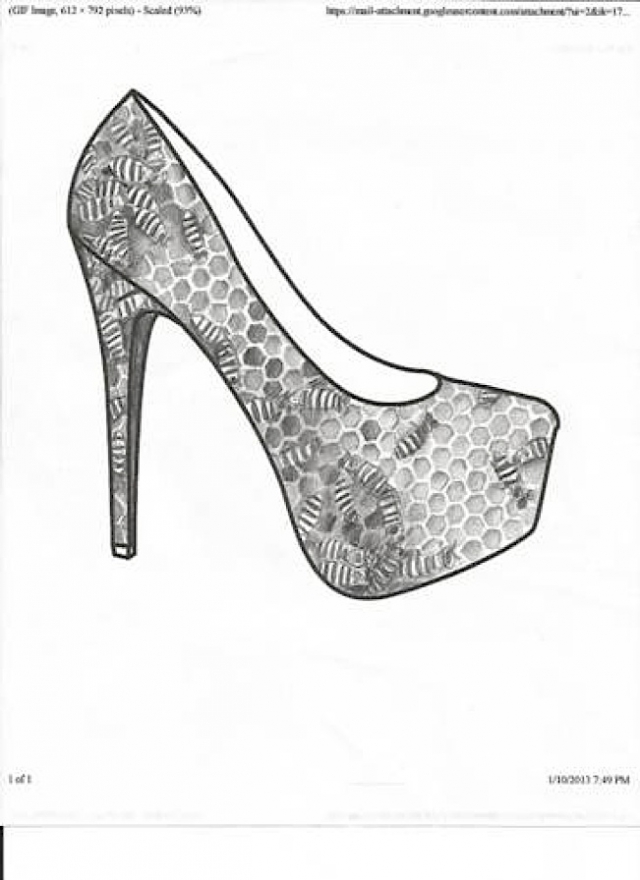 “Keeping my mind focused on the actual painting process has been the hardest part,” said Rachel Sprague, the other artist working on these shoes. “This project has been fueled by adrenaline, which strangely translates very well into the nervous excitement of the bees.”

Collaboration is not always easy, but these two artists work in tandem. “We trust what we are doing so much that it feels more exciting than anything else,” Faas said. “The level of commitment to seeing this project through, for both of us, is off the charts.” 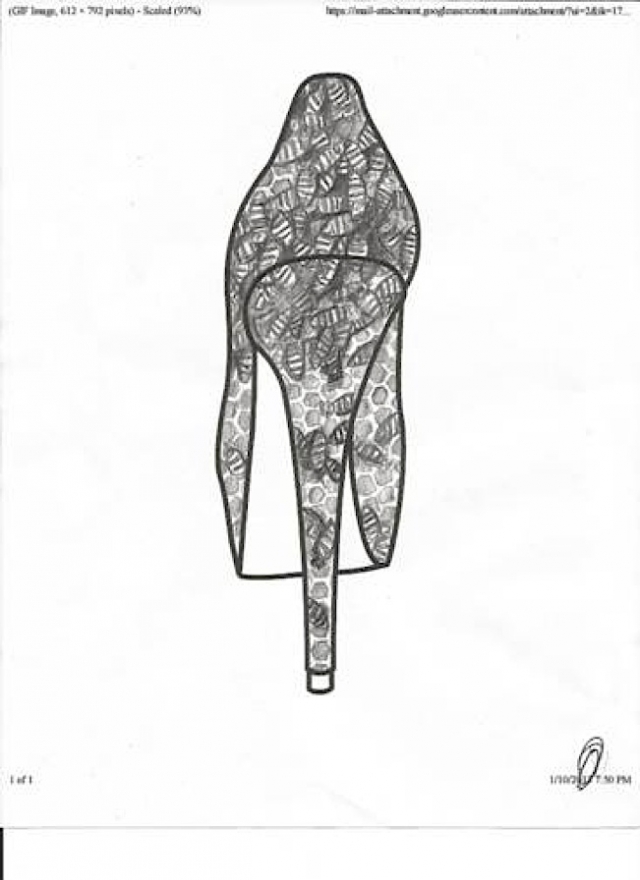 With the amount of time and energy pouring into a single pair of shoes, Sprague compared her collaboration with Faas to parenting. “We both care so deeply for this thing, and just want it to be as good as it can be when we release it out into the world, or in this case, into the arms of Lady Gaga,” she said.

After all is said and done, everyone at Hourglass Footwear has high hopes for how the shoes will be received. “We’re hoping she loves them so much she takes us on permanently as her personal shoe designers,” Strom said.

Faas created a more complex story in her mind. “I can sort of picture her opening up the box and being surprised and then loving them,” she said. “Then of course sitting down and putting them on. Then she wears them on stage. Calls us later to hang out…. It’s a total fantasy take-over whenever I get to imagining her reaction. This project has allowed us all to dream big because, why not?”