A Dream of a Transgender Movie: “The New Girlfriend”

French director-writer Francois Ozon has crafted a superb, and at points, sublime, film about a person’s emerging trans identity that will clarify confusion many have about that subject. The New Girlfriend is both edifying and artistic. It begins at the funeral of Laura, a young cisgender woman whose cisgender friend since childhood, (Anais Demoustier), finds her death to be emotionally unbearable. At her visceral funeral testimonial, Claire vows to look after her infant child. In flashbacks Laura is played as an adult by the dreamy Isild Le Besco.

Claire’s husband, Gilles (Raphael Personnaz), is understanding of Claire’s prolonged grief, and he has no trace of envy for Laura’s widowed husband, David (Romain Duris), the father of the child Claire has vowed to look after. David lives nearby so there is no issue of distance for Claire, so she can always drop in easily. One day she does so, and finds the grieving David dressed as a woman, cuddling the baby.

What unfolds is a dual portrait of 1) Claire’s shock, disbelief, inner struggle, and acceptance of who David truly is and 2) David recapturing a trans-consciousness that was submerged during marriage to Laura. However, since  her death, the woman within has re-emerged, but only in private. Duris’s performance as David becoming “Virginia” is vividly and poignantly realized.

The New Girlfriend also clearly differentiates between gayness and trans-ness, while also exploring rather than complaining about those who struggle to accept trans identity. Demoustier offers a splendidly delicate performance that chips away at Claire’s prejudices, her conflicting feelings about her own and even her husband’s sexual orientation, and a legitimate fear of just how Virginia can integrate into society and still maintain child custody. Note that David’s income level is average at best. 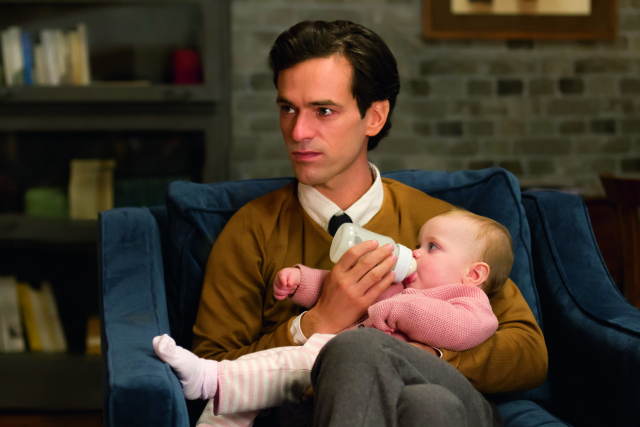 The scrumptious Personnaz’s Gilles is terrific as a truly civilized straight man whose compassion for Claire, David, and the baby, is a model for us all. Ozon doesn’t caricature Laura’s religiously conservative mother (a lovingly gentle Aurore Clement). He understands that even those we have hard disagreements with are still human and capable of caring and loving in their own way. Ozon seems to be someone who urges us to consider kind and civil ways to come to positive conclusions in our world which leans toward “us vs. them.”

Pascaline Chavanne’s costumes perceptively suit all the characters’ personalities. Phillipe Rombi’s lush score matches the deep feelings that The New Girlfriend elicits. Ozon adapted the screenplay from Ruth Rendall’s short story. He has directed the film with an aura of mystery akin to what he gave us in his wonderfully bi-erotic Swimming Pool (2003) with Charlotte Rampling. Demoustier, like Rampling, has a captivating mystique. That said, Demoustier is more vulnerable. And The New Girlfriend shows growth and clarification on the vital topic of gender fluidity and sexual fluidity.