A Cruelly Satirical Look at Patriarchy — “Volpone” at the Theatre Garage 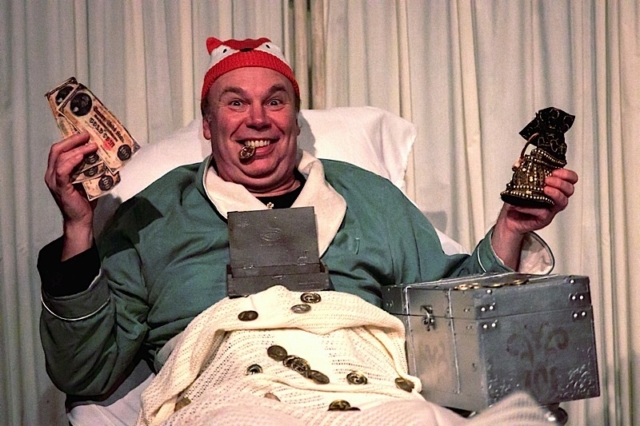 Ben Jonson is generally considered to be the second best playwright of his time, with Shakespeare being the first. The Classical Actors Ensemble is a first rate producer of plays of the English Renaissance aka the Elizabethan and Jacobean eras. So it’s a real treat to see Jonson’s Volpone executed with such sharp wit, searing satire, and luscious buffoonery by CAE.

Arthur Moss is gloriously smarmy as the rich Venetian, Volpone, who pretends to be at death’s door in order to trick other wealthy men to think he will leave them in his will. Surely he will die any day now! It serves as a cunning extortion racket aided and abetted by his manservant, Mosca. However, Volpone goes further out on a limb than ever previously when he and Mosca orchestrate one of the most wicked sexual assaults in the history of stage comedy. And just to be clear, Jonson is very clear that the sexual assault is a monstrous abuse of privileged male power.

Joseph Papke has directed the cast to impeccable comic effect. Timing, outlandishly vivid characterizations, and an incisive grasp of Jonson’s sophisticated wit make for a hilarious and provocative theatrical experience. Papke also acts in the production, elegantly superb, yet darkly macho in a paradoxical way, as the ruthlessly brilliant Mosca. It has been several years since I saw his wonderful performance in The Twilight of the Golds at Minnesota Jewish Theatre. I had forgotten just how wonderful an actor Papke is. His Mosca is utterly definitive.