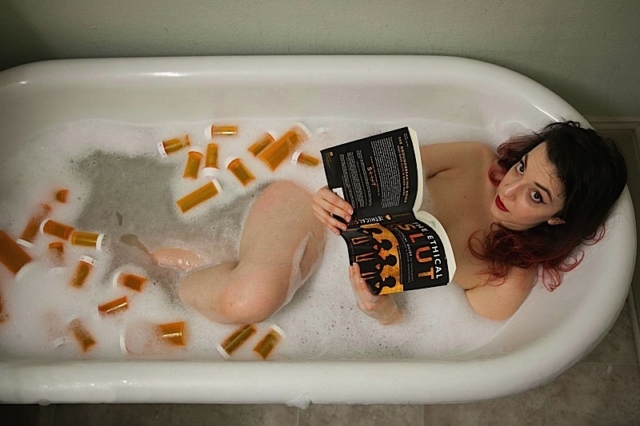 Lyssa Sparrow performs with sassy comic flair. She takes personal experience that came to a head on New Year’s Eve 2015 when her fears of coming out as a bisexual were shattered. After having broken up with a boyfriend and her family unable to give her emotional support she needed, she chose to come out in the new year with gusto. Sparrow’s solo show, First Year Queer, celebrates that on stage at Intermedia Arts as a Fringe production that brims over with vitality.

Sparrow uses puppets to poke fun at various people she came out to. She talks about anxiety, therapy, and depression. Moreover, the performance includes filmed interviews with people who have suffered from sexual abuse followed by demonstrations of kink practices which vary for each performance. This enhances shared thoughts on attitudes about bisexuality, date rape, non-monogamy, and polyamory. Sparrow champions the sex primer, The Ethical Slut by Janet W. Hardy, at points during the performance, a book she feels is a Must Read. Literature was passed out after the performance addressing issues of violence. First Year Queer definitely packs a punch as it sets out to reeducate audiences about violence, sexuality, and identity.