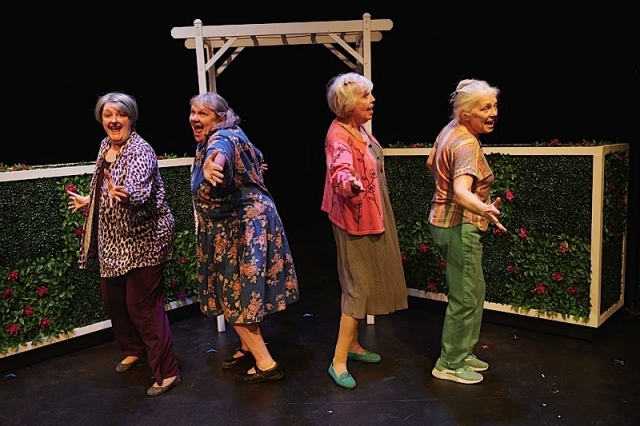 Caryl Churchill has built a worldwide reputation as one of theater’s perpetually innovative playwrights. With Escaped Alone and Here We Go, two one acts she wrote in the middle part of this current decade, she plunges headlong into a nihilistic vortex that borders on the paranoid. Frank Theatre has paired them up in a captivating production at Gremlin Theatre. 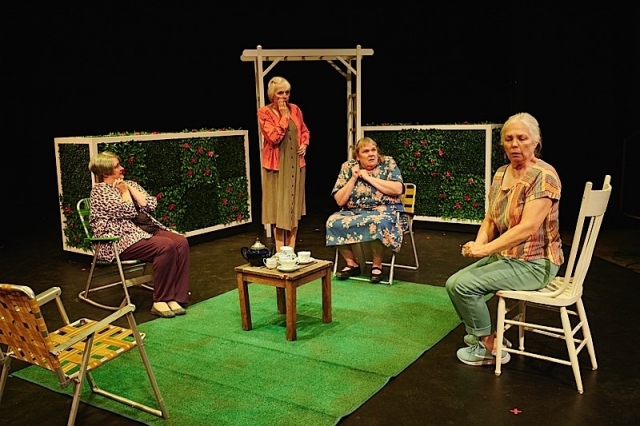 In Escaped Alone, Churchill has created four women, apparently familiar with one another, all over age 70. They gather in a garden, echoing the tea party effect of Lewis Carroll’s Alice in Wonderland. All sorts of disparate thoughts come out of their mouths though it registers as perfectly human rather than absurd or surreal. In subtle ways, each woman bares parts of her soul though the situation is casual. They also makes us laugh.
The chat ranges from jokes about human stupidity, disputed facts about the nature of a particular death two of them have starkly different perspectives on, hairdos, and feline phobia. Actresses Cheryl Willis, Barbra Berlovitz, Janis Hardy, and Maria Asp flow with harmonious ease and interconnection as topics and events they speak of jump out and about, often with no apparent logic. Just like real life.
It recalls Churchill’s 1983 milestone, Top Girls, with it’s opening scene of women from far reaches of history having a meal in a dream space. You never know what they might say and it’s pure hell to memorize and coordinate. But once achieved it’s thrilling to watch. Indeed, Escaped Alone faces an uncannily similar challenge and these actresses rise to the occasion in top form: impeccably lyrical, yet quite natural. 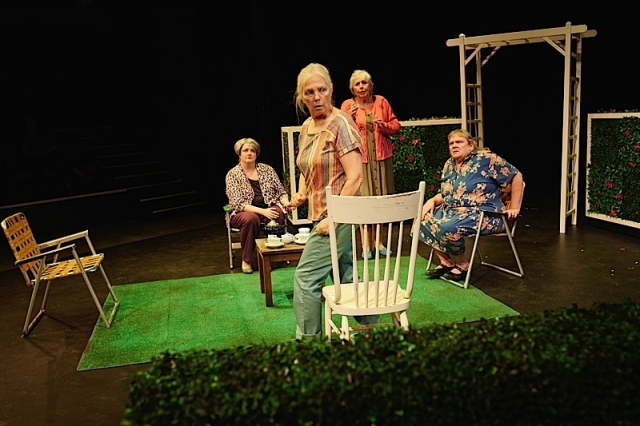 I said it wasn’t necessarily absurd or surreal. That said, there’s an undercurrent that steers us toward that realm.
Churchill punctuates the garden party with dire and deranged passages with all sorts of nihilistic verbal imagery: poisoned water, pets raining from the sky, presidents committing suicide, ecological catastrophe. Yikes! Under Mike Wangen’s dark hued lighting, these segments are grippingly related by Willis so that she seems to be abruptly plucked out of the garden situation by some alternate energy field.
Willis’s body contorts as if nihilism itself has worked itself into her very musculature and nervous system. Is this performance warning us of the danger of obsessing over things we have little or no control over? Might we actually self-destruct over the hyper-saturation of a terrible awareness? One is reminded of Cassandra at Troy. 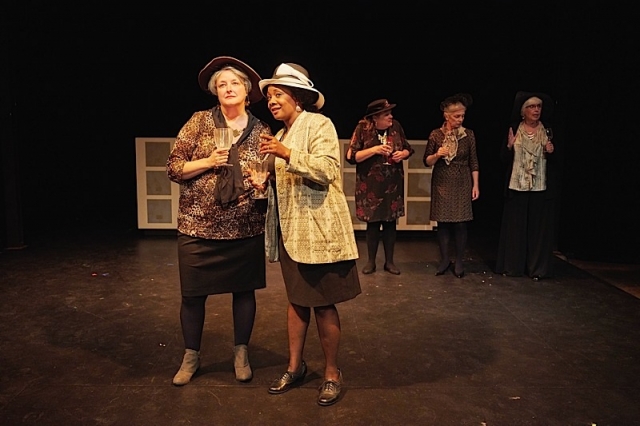 This terrible awareness is also at the heart of the three scenes of Here We Go. which dovetails thematically with the former play. Scene One has mourners reminiscing on a man who has just died. Each one ultimately states when they will die and how. The Escaped Alone actresses play those roles along with Charla Marie Bailey. In satisfyingly striking contrast to the previous “garden casual”, they’re quite prim and more heightened in their approach to the characters. 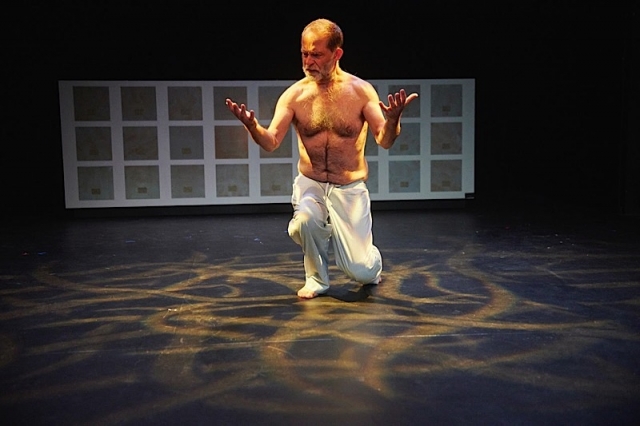 In Scene Two, a wrenching Patrick Bailey is the dead man. Now in soul form, he faces an existential abyss suspended in a kind of limbo. Edgar Allen Poe meets The Twilight Zone. I don’t write this to denigrate Churchill’s intent at all. Frankly, it is a staggeringly horrific scene because the man in soul form actually manifests the fear of death with unhinged fear to the nth degree. Bailey is astoundingly visceral as this soul seems to be flailing in the mist, so to speak, about what’s to befall him for eternity. He seems to be wanting to bargain but he doesn’t know what higher power to supplicate! A sign of spiritual confusion in our time? The limbo sense evoked implies Jehovah, Jesus, or Mary. But he mentions Valhalla and the ferryman to Hades. It might also be perceived as some point in outer space. And being a man of our time he considers a kind of quantum physics approach to what happens to our soul and essence. It’s quite chilling, enhanced with a surreal lighting image from Wangen. 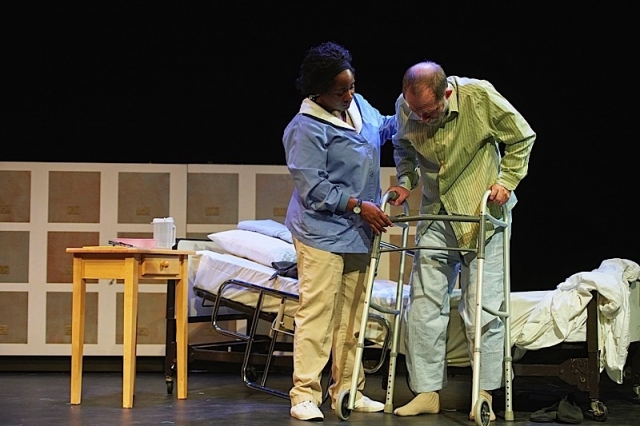 Scene Three is uncomfortably accurate as a reflection of what seems to be 11th hour hospice existence. In that scene, a soothing Charla Marie Bailey returns as the nurse. It rounds out a remarkably observed little play about what may precede and occur right after the hour of our death.
Litanies of paranoid thoughts circulate throughout both plays. I sense that this legendary 81-year-old who wrote these beautifully bizarre pieces just a few years ago, felt compelled to exorcise these thoughts, fears, feelings, anxieties out of her system. They’re the sort of stuff that can eat you alive from within if not somehow dealt with.
The savvy Knox and her probing actors have poetically rendered Churchill’s tribulational apprehension which I suspect may either mirror or refract the playwright’s own personal dark night of the soul. In the hands of Frank Theatre, the plays paired together emerge as something akin to a postmodern stage version of those foreboding medieval-era images of the terrifying mystery of death.
Escaped Alone & Here We Go
Through Sept. 29
Gremlin Theatre, 550 Vandalia, St. Paul
800-838-3005
www.franktheatre.org