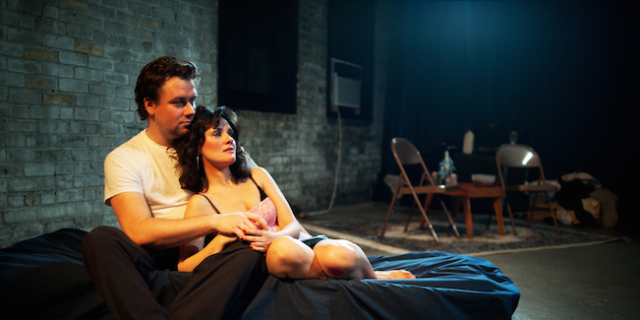 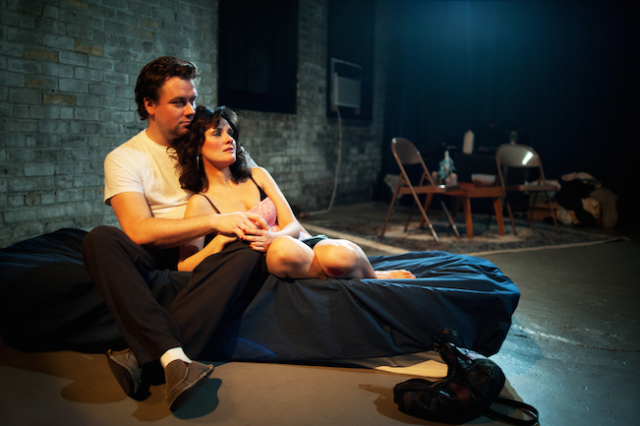 Playwright William Mastrosimone’s 1989 drama, Sunshine, embraces both sexuality and the possibility of true love. This three-person play, now in a touching production by Dark and Stormy Productions at the Artspace Grain Belt Warehouse, pits a free-spirited sex industry dancer and a sexually diminished paramedic against each other’s life view.

The dancer, named Sunshine, stands, moves, and poses behind a glass panel so that paying male customers can peer at and fantasize with her. She sees it as legitimate work and has managed to deflect the shame and paranoia such employment generates in a sexphobic world. That’s quite an accomplishment actually. She has wrestled with the problem of whether or not she is allowing herself to be objectified.

However, Sunshine’s mettle is tested when she flees an abusive man and takes sudden refuge with a bitter paramedic whose apartment she just happens across late one night. The paramedic automatically draws sweepingly judgmental conclusions about how she lives her life until something shifts. He is unexpectedly made to see his own self-deceptions about love and sex. 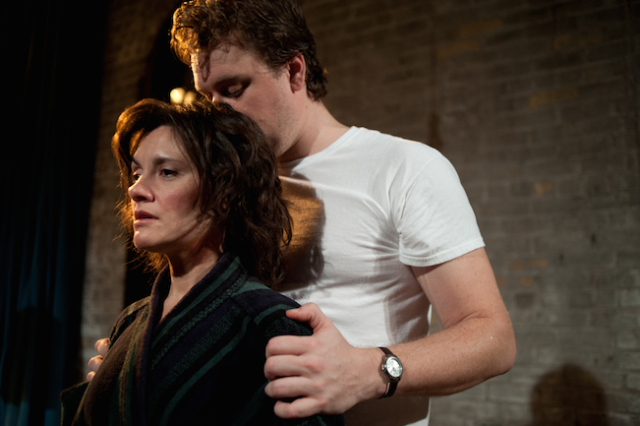 Mel Day has directed the piece with a perfect blend of sharp timing, vibrant humor, and deep understanding of the human heart and libido. Sara Marsh’s Sunshine is splendidly volatile and heartrending. Nels Lennes as Nelson the paramedic is perfectly intimidating and closed off, but when he sees his judgmental overkill he seems to shift consciousness. This pair is a joy to behold.

Tony Sarnicki adds compelling layers to the production as a college student who has become recklessly compulsive in his adult entertainment spending, not to menton his obsession with Sunshine. This is indeed a production that raises lots of pertinent questions about the power of sex and desire.