A fiery prima donna, an idealistic artist, and a manipulative chief of police find themselves entangled in a web of drama in this spellbinding classic. Tosca’s allegiance to her lover, Cavaradossi, is put to the ultimate test by the obsessive Scarpia who will stop at nothing to possess her. This magnificent tale of deceit, love and honor brims with sumptuous music and unforgettable arias. Minnesota Opera last created a new production of Puccini’s Tosca in 1991, and last performed this iconic work in 2005. Now, ten years later, audiences will delight in an entirely new twist on tradition. Though set in the early 1900s, the three-act production offers an original, modern-day approach. Immense hand-carved sculptures, lavish costumes, projected imagery and stunning sets will create a vibrant backdrop for this fast-paced production, and bring a sophisticated sensibility to this beloved classic.

Leonardo Capalbo makes his return to Minnesota Opera as Cavaradossi, the revolutionary artist. Capalbo has garnered international acclaim for his performances throughout the United States and Europe, but Minnesota Opera audiences know Capalbo from his turn as Nemorino in The Elixir of Love; and his creation of the role of Ben Marco in the world premiere of The Manchurian Candidate last season. Minnesota Opera’s Tosca marks Capalbo’s role debut as Cavaradossi. 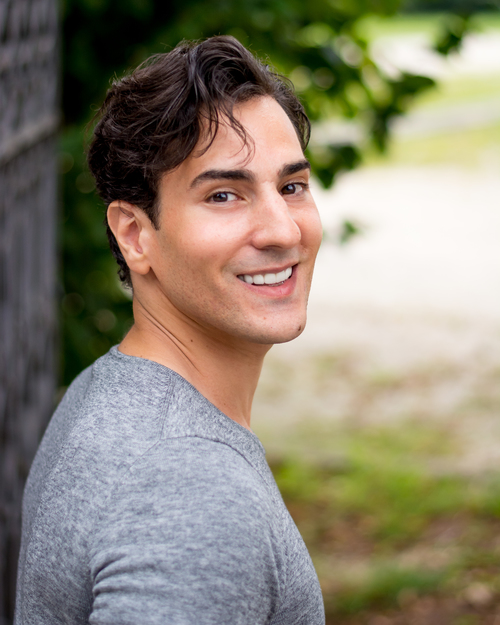 We last spoke when you were in town for the comedic opera, The Elixir of Love. Tosca is a melodrama. What do you like about both types of opera? Is one easier than the other to perform?
Leonardo Capalbo: My repertoire has always been comprised of a wide range of roles in operas that span many different languages, styles, time periods, and genres. I find it rewarding artistically to interpret what each composer asks of one’s voice and to also discover how to physically embody that character. Life would be boring if I sang the same five roles.

Critics of Tosca throughout history have had mixed reviews since it debuted in 1900, yet it remains one of the most frequently performed operas and audiences love it. Why do you think there is that kind of discord between audiences and critics?
LC: I think Tosca is popular and immensely appealing to audiences because it is filled with sumptuous tunes and direct in terms of narrative. Tosca is essentially a political drama with a deep and true story holding it together. It may have been described as a “shabby little shocker” by one critic at its premiere but I’d wager that its provocative factor still enthralled audiences. To be fair, it’s much more than that. Cavaradossi, for example, is a man that is torn between the life of an artist/lover and a political activist/revolutionary rebel. I believe Puccini intended to write a very human story. There is no divine intervention, no otherworldly magic involved — only fallible and imperfect people struggling throughout life to maintain what each of them believes to be right.

Though set in the early 1900s, this production offers an original, modern-day approach in sets, costumes, and projected imagery. What does that kind of modern update add to the classic tale? Does it impact your portrayal of Cavaradossi?
LC: The setting of a production, costumes, lighting and even how the other artists with whom I share the stage perform certainly impacts my own presentation. I consider myself a re-actor; my performance is informed by what happens around me. I have my own strong views and objectives as a performer and those are not altered, but they are shaped by the rest. I find that this aspect of being a singing actor is quite interesting. I am also very aware that my own energy and power can alter those around me. This allows for balance and I believe that real art is always a collaborative exercise. 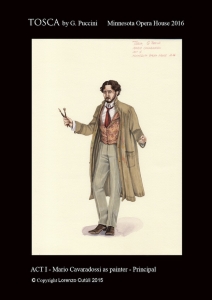 Cavaradossi as painter ACT I
Costume rendering by Lorenzo Cutùli 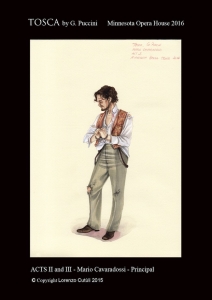 Tosca has the pleasure of being one of few operas with an abundance of recordings. With the history of Mario Cavaradossis of the past – there are so many great ones, like Caruso, Fernando de Lucia, Aureliano Pertile, Gigli, Di Stefano, Corelli… In your preparation, do you listen to these singers of the past? How do you relate to that body of work?
LC:
I have a huge admiration for many of the great tenors that have embodied this role. I’ve listened and studied for years from the beautiful recorded legacy that they have left. I think it’s important to listen to them, respect what they offered, and learn from how they each performed, but to make the role your own you must turn to the score. All the clues as to how best interpret a role are in the score. They are left by the composer, but can also be found within oneself. If a singer does not bring one’s own heart, soul, and essence into play, then they are not exactly incarnating a given character.

And vocally, Cavaradossi can be a difficult role, for instance when he sings “Vittoria” you need to produce an A-sharp 3 and then you have to quickly go down to one octave below for “L’alba vindice appar” and at this moment the orchestra is very loud and you need to be above it, right? So, how do you approach this role? What do you think are the challenges of this role?
LC: Vocally, Cavaradossi has its challenges. One must have an even, strong voice that can soar and depict the many range of emotions this man is feeling. I won’t bore you with technical talk, but I can relate some things that are of far more importance. In a moment like the famous “Vittoria,” I think it’s essential to not over-think, but to simply do. One has the required color and resonance when things are in balance. A huge part of singing is about honesty and humility. I strive to always sing with truth in my voice. I firmly believe that a voice is released when the instrument itself is most honestly played.

Tosca runs at the Ordway Center for Performing Arts March 12–26. For more information and to purchase tickets, head to www.mnopera.org.