5Q: To Begin With 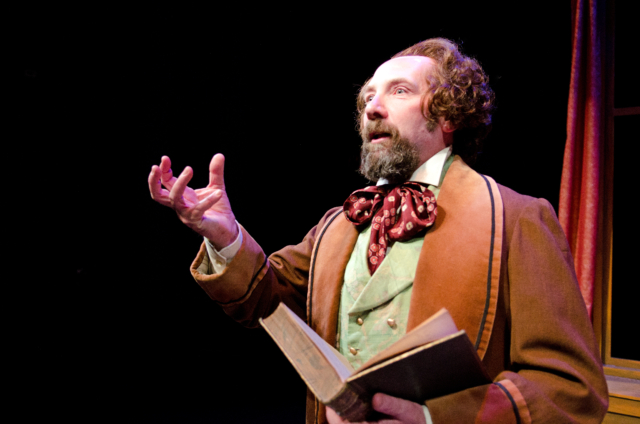 Charles Dickens wrote a story for his children to tell them about the life of Christ, and though he never intended this work to published, the Dickens family agreed to publish it as The Life of Our Lord in 1934 (64 years after his death). It is on this book that the one-man play, To Begin With, is imagined, performed by Gerald Charles Dickens, the great-great-grandson of Charles Dickens. To Begin With tells the fascinating story of Dickens’ struggle to create a personal adaptation of the Biblical Gospels to be performed for his children on Christmas Eve 1849. Amid distractions from his family and his own insecurities, he wrestles with how to present the story of Jesus Christ to a brood that ranges from 2 to 10 years of age.

Gerald Dickens has worked as an actor, director, and producer for many years. In 1993 he created his first one-man show, a theatrical performance of A Christmas Carol inspired by Charles’ own energetic readings of the 1860’s. A fascination with the life and works of his subject led him to write and direct further one-man shows, including Mr. Dickens is Coming!, Nicholas Nickleby, and Great Expectations. He has also adapted many of his ancestor’s own public readings such as The Signalman and Doctor Marigold. 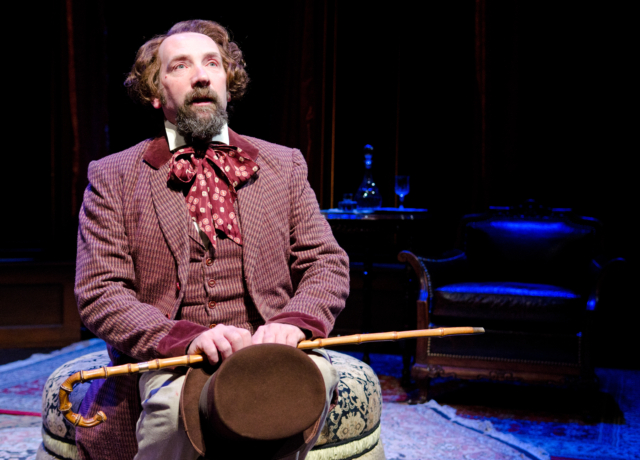 The Life of Our Lord was something that your great-great-grandfather didn’t want published. Why do you think that was? Is that something you’re cognizant of as you’re performing?
Gerald Charles Dickens: I think that the important thing here is to ask why Charles Dickens didn’t want The Life of Our Lord to be a published work. He wrote the story of Christ solely for his children, so that they could learn the lessons of the Gospels in a form that he knew they would understand. So, within the book are little passages that are unmistakably a father talking to his children: “…you never saw a locust, because they belong to that country near Jerusalem, which is a great way off. So do camels, but I think you have seen a camel. At all events, they are brought over here sometimes; and if you would like to see one, I will show you one.” When Charles wrote it he was at the peak of his fame, and didn’t want to exploit his young family by publishing what was theirs.

The decision to actually publish the story was taken by his children, more precisely his last surviving child, in 1933. Henry Fielding Dickens wrote in his will that as the children that the story was originally written for were all now deceased, so the next generations of the family should be allowed to publish it if they felt it right. The Life of our Lord was therefore published in 1934. Our show, To Begin With, is not a dramatization of the book itself, but about the character and faith of the man who created it.

Though the show deals with religious topics, it’s described as being a show for everyone, religious or not. What about the show appeals to broad audiences?
GCD: Charles Dickens is an extraordinary character, and this show shows him in all aspects of his life. We see his overflowing self-confidence and his sensitive fragility; we see him in full theatrical flight and we see him battling against writers block; we see him embracing and sharing his faith and battling with temptation; we see him caring for and nurturing his family, and being a single-minded professional author; we see him embracing his exciting future and wallowing in his tragic past.

To Begin With is a play about a character whom we think we all know, but who has an amazing story behind his life, and our author Jeffrey Hatcher has done a quite remarkable job in linking the story of the book to the story of his life.

I suppose that most people know Charles Dickens for A Christmas Carol, and within that book we are told about the author’s faith, but in a way that is incredibly brilliant and entertaining; that is what we do with our current show too.

You’re no stranger to the one-man show, having created multiple one-man adaptations of Charles Dickens stories. What about performing solo appeals to you? How do you prepare for the challenges of a one-man show?
GCD: The one-man show is an amazing format, and a rather selfish one, it has to be said. You may imagine that it is a lonely way to perform, but I find that the connection with the audience makes it an incredibly inclusive form of theater. An audience watching a one-man show becomes involved in the story because, to a certain degree, they are required to bring their imagination to the theater with them. When watching a movie you are given everything, so you just sit in your seat with your popcorn and let the action take place, but at a one-man show you have to join the performer in the plot.

In To Begin With the character of Charles Dickens is talking directly to the audience, so it becomes a conversation and it is that bond that I love so much. Of course, not having to share the applause with anyone else helps too!

Charles Dickens is known as the first literary superstar, embarking on tours and being recognized by fans. What is it like stepping into those shoes for the show, not only as an actor but as a relative?
GCD: Dickens was certainly a superstar in the way you describe and was probably the most famous man of his age. To try and recreate that is an almost impossible task because he had that “something” that no one else had, or has. But what I can do is take aspects of his life and work and perform them in a theatrical and entertaining way, that I hope (and do believe) he would approve of.

What I try to do as an actor is to let audiences see Dickens as a man, and not just an author. I love peeling away the layers of celebrity and telling the tale of a man who became an icon. He was not perfect, but he was fascinating.

As a family member I am just incredibly proud to see how his celebrity status has continued for 147 years after his death. I am not continuing his legacy, or keeping his work alive; his legacy would be doing just fine with or without me! I suppose what I am doing is demonstrating my admiration and pride and sharing those two emotions with as many people as I can. 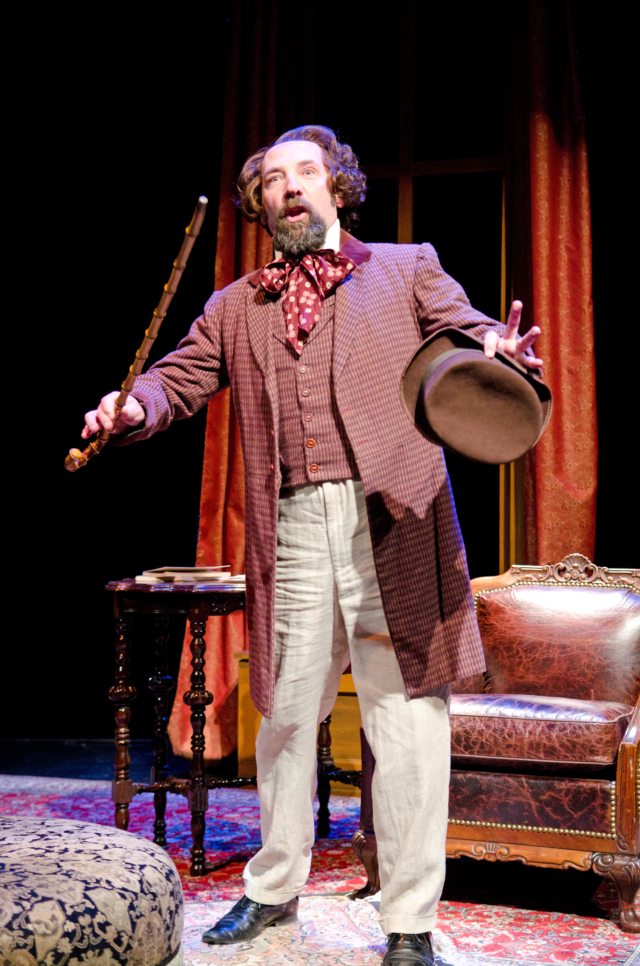 Is there anything you’ve learned that has surprised you about yourself or your family throughout the course of preparing for this role or your extensive career shows adapted from Charles Dickens stories?
GCD: As a teenage student I hated Dickens! I, like many others, had been made to study one of his books (Oliver Twist in my case), and hated being told that this was brilliant literature that I should admire. For me it was the theatrical nature of my great-great-grandfather’s character that attracted me, but I didn’t discover that for many years.

Theater had always been in my life, ever since I performed as a giant rooster in a school nativity play, and in 1993 I was asked to recreate one of Charles’ dramatic readings of A Christmas Carol. I didn’t know that he did readings from his work, and thought the word “dramatic” was probably covering the fact they were more akin to a dull lecture. Oh, how wrong was I? I started to do a little research and discovered that Charles’ first love was the theater and he loved to perform. Accounts of his acting exploits told of a man completely at home on the stage, who loved to manipulate his audiences to laughter and tears. And suddenly I understood what he was all about.

I went back to the novels armed with my new perception, and they changed from being dull, dusty tomes, into passionate, vibrant scripts with casts of the most extraordinary characters. And the more I read and performed, the more I felt a connection with him. I found a confidence within myself that I had never had through childhood, and I discovered that insecurity is allowed, and indeed must be embraced, to become a complete person.

To Begin With runs at the Historic Wesley Center March 28–April 15. For more information and to purchase tickets, head to www.hennepintheatretrust.org.