5Q: The Wizard of Oz 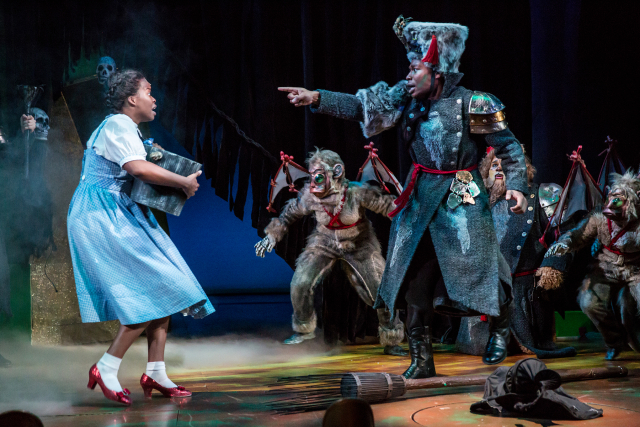 John Jamison, as a Winkie, announces that Dorothy (Traci Chapman) killed the Wicked Witch of the West. Photo by Dan Norman

The songs, the costumes, the wonder of it all are back and together again in a holiday extravaganza that nobody can resist. Children’s Theatre Company once again revisits the land of Oz and pulls out all the stops to take the beloved L. Frank Baum story to dizzying heights with a cast of munchkins, monkeys, and four friends in the
pursuit of courage, a brain, a heart, and a home.

John Jamison won the Triple Threat award at Hennepin Theatre Trust’s SpotLight program. He received a scholarship trip to NYC where he and his father saw shows, auditioned at casting agencies, and took part in master classes. From there on, he has performed with the Guthrie (A Christmas Carol and Midsummer’s Night Dream) while studying at the University of Minnesota. And then this year, Jamison was awarded the performing apprentice position at CTC, after a national search. Perming apprentices receive a living wage and perform in/understudy in CTC shows.

John Jamison, as a Winky, announces that Dorothy (Traci Allen Shannon) killed the Wicked Witch of the West.
Photo by Dan Norman

You made your CTC debut in a 2002 production of Oz. How has the show changed since then?
John Jamison: The show surprisingly hasn’t changed much. They use just about the same costumes and the principle role are almost played by the same people. Deja vu was happening all throughout the rehearsal because everything was so familiar!

What is it like to be returning to CTC with Oz once again, so many years later?
JJ: Coming back so many years later makes this experience just that much better! It’s crazy how many people still work here. I was getting my current measurements for my PA (Performing Apprentice) year in the fitting room with the crew when Carol [Lane, Costume Cutter] pulls out a book from 2002 with all of my measurements and shows me the exact costumes that I wore during that run! It was awesome. Also Dean and Reed [The Lion and The Scarecrow] remembered me from The Wizard of Oz in 2002!

What draws you to the story of Oz and children’s theater?
JJ: Children’s Theatre Company is the one of the most welcoming environments I have ever stepped my foot into. Every single person I’ve met has been a one-of-a-kind and so welcoming and easy to talk to. They love new faces! 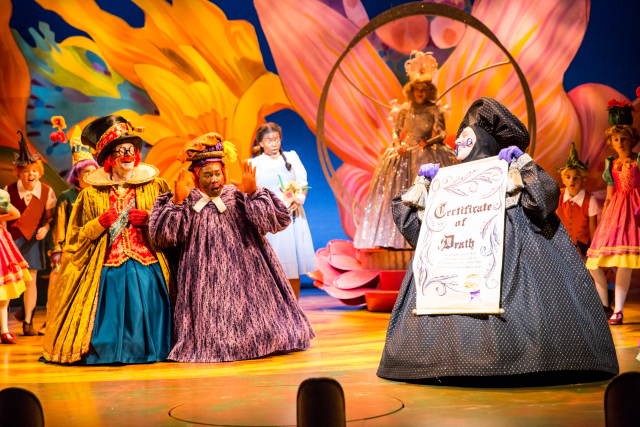 John Jamison (center) and the other Munchkins listen as the Munchkin Coroner pronounces the Wicked Witch of the East dead.
Photo by Dan Norman

You received a scholarship trip to NYC that opened your father’s eyes to acting as a possible career. How did that trip change things?
JJ: I know how difficult it is to see a steady career in acting for anyone and I can only imagine how much more difficult it is for parents. Bringing my dad along on the trip was one of the best ideas, because when we met with Broadway actors he had no problems asking the hard questions I couldn’t ask that I wanted answers for. How did you get here? What type of education did you get? Are you happy? What obstacles do you face as an actor of color? These are some of the questions that my father and I needed answers for, and him being able to get these answers put his thought process on some sort of path that was well needed for the both of us. I am so thankful for Hennepin Theatre Trust for giving us that opportunity. Without them I wouldn’t have kept going with theater.

Hennepin Theatre Trust’s SpotLight program created an award for you. What was it like winning that award?
JJ: Having the triple threat breakout performer award created for me was one of the nicest things anybody has ever done for me. receiving that type of acknowledgement keeps me going to this day! Having a fantastic group of people see something in me that I didn’t see forced me to reevaluate my decisions and really contemplate my possibilities. From then until now there’s significant growth in John Jamison, and I plan to only keep growing.

The Wizard of Oz runs at the Children’s Theatre Company through January 10. For more information and to purchase tickets, head to www.childrenstheatre.org.