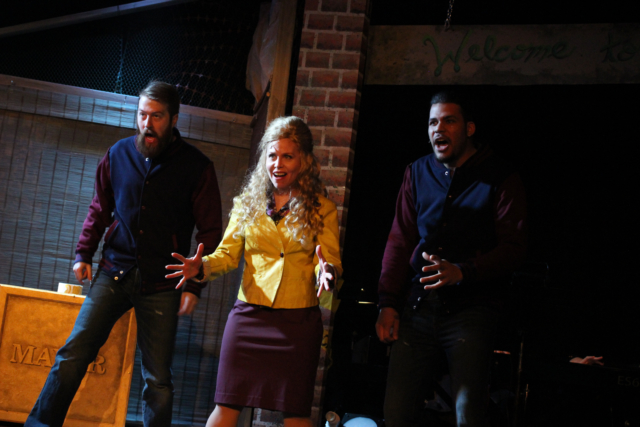 Based on Lloyd Kaufman’s cult film and winner of the Outer Critics Circle Award for Best Off-Broadway Musical, The Toxic Avenger is a charming love story and laugh-out-loud musical that has it all: an unlikely hero, his beautiful girlfriend, a corrupt New Jersey mayor and two guys who play everyone else: bullies, mobsters, old ladies, and stiletto-wearing back up singers. The Toxic Avenger is a rock musical that’s “entirely serious about being completely silly.” Throw in book and lyrics by Joe DiPietro and music and lyrics by David Bryan (of Bon Jovi fame), and you’re in for a good time.

Kim Kivens is a veteran of the Twin Cities theater scene, appearing everywhere from the Children’s Theatre Company and Theater Latte Da to Park Square Theatre and The Chameleon Theatre Circle. Kivens takes the stage once again with Minneapolis Musical Theatre in The Toxic Avenger, playing multiple roles with her four other cast mates.

The Toxic Avenger is based on a cult film but it’s a bit lesser known. What do you tell people to expect with this production?
Kim Kivens: Laughs. It’s silly fun. The Lloyd Kaufman film is just it’s base. Joe DiPietro and David Bryan (the keyboardist for a little band called Bon Jovi), who also penned the musical Memphis, took that base and sprinkled their own New Jersey magic on it. The score has more of a rock feel and touches on different types of rock within that. It’s definitely a show that isn’t your typical musical theater entry with the music sometimes giving off a rock concert vibe, so it may be appealing to a wider audience, like someone who may not usually go to see live theater.

With a small, five-person cast, you’re tasked with playing multiple characters. Including a scene where you play two characters at the same time. Clearly that’s challenging—what other challenges does a show like this present to you as an actor?
KK: Yes. I am extremely thankful that I have a lot of assistance during that scene to make it happen. With this show, we rehearsed in a different space than where we are performing, so that first night of tech week (the week prior to a show opening that brings all of the elements like lighting, sound, set, props, and costumes together) we had to adjust some of what we had rehearsed. Challenges are presented in every show, though. That’s what that tech week is for. You iron out the wrinkles and somehow you get there. Usually because you have a smart and creative team directing and managing you, like we do. It takes a village.

You’re a veteran in the Minneapolis theater scene. What is the appeal of working with such a small cast for The Toxic Avenger, compared to larger shows?
KK: Smaller cast shows sometimes give more opportunities for the actors to stretch and play multiple roles. I love giving a good backstory to the characters I play, especially when there are multiples in the same world. Sometimes, I am the only one who knows those back stories. In this case, it takes a ridiculous storyline and gives it some sort of realness to have an end product that, even in the disbelief of it all, is hopefully believable to an audience. 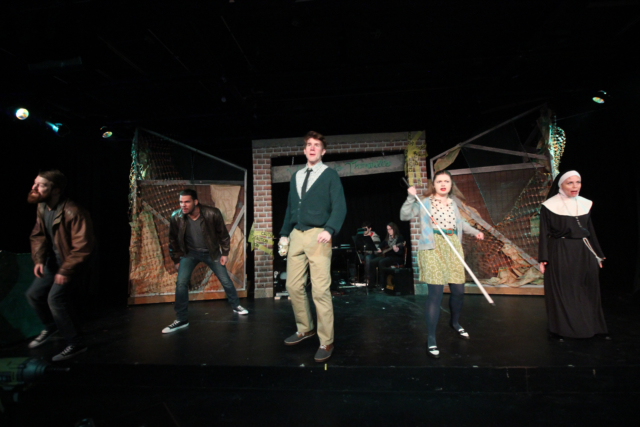 The Toxic Avenger has been described as “so wrong it’s right.” Would you say that’s accurate? What do you think that means?
KK: So wrong it’s right? Sure, I can agree with that. This storyline is soooo fiction on many levels, but if we get audience members entertained, having a good time, taking a couple of hours for a night out, and leaving their reality for some crazy laughs, then I would say it’s definitely right.

A lot of critics have talked about the social commentary that’s evident in The Toxic Avenger. What are some of the themes or messages you hope audiences walk away with?
KK: When I first read the play this past summer, I thought about how we could, or if we would, have to modernize some of the pop culture references in the show because the musical first debuted in 2008. Ten years have passed and “the times they are a changing.” BUT as we started to rehearse each song and each scene, which WERE a bit dated, most of them suddenly became relevant again. So, does it all come full circle? Are we all on this ride where the same things continue to happen in our world and we let them continue to happen? Good or bad? “it’s all the same f*#$ing day, maaaaaaaaan…” The message, in my opinion, is about transformation and stepping outside of the box or your comfort zone. Not just for the story but for the audience, as well. Can you find depth in the absurd? Absolutely. Can you do it while laughing? I sure hope so. When in doubt, make ’em laugh.

The Toxic Avenger runs at the Phoenix Theatre through February 25. For more information and to purchase tickets, head to www.aboutmmt.org.