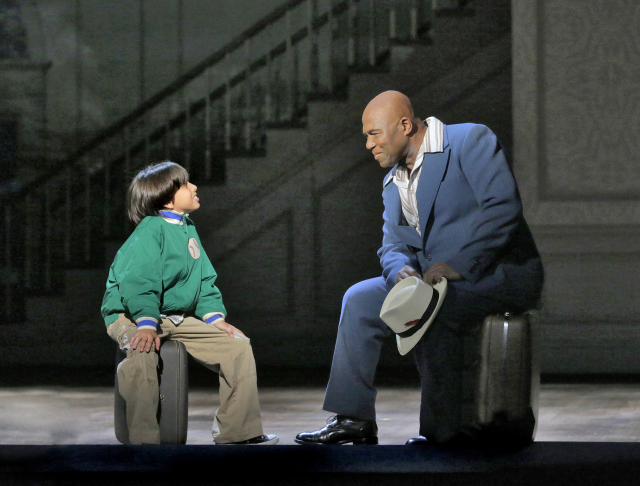 Alejandro Vega as Danny Torrence and Arthur Woodley as Dick Hallorann in The Shining. Photo by Ken Howard

Alejandro Vega as Danny Torrance and Arthur Woodley as Dick Hallorann in The Shining.
Photo by Ken Howard

The Shining’s world premiere run is a chance to see baritone Brian Mulligan, who regularly performs with leading opera houses, create the role of Jack Torrance and share the stage with Alejandro Vega, a local fifth grader making his Minnesota Opera debut in the role of Danny Torrance, Jack’s son. The two are joined by Minnesota Opera favorite Kelly Kaduce as Wendy Torrance, Jack’s wife. Bass Arthur Woodley completes the principal cast as Dick Hallorann, the seasonal cook at the Overlook, who shares a psychic ability with Danny that he calls “the shining” and who returns to the hotel to rescue the family in the final moments of the opera. Making his Minnesota Opera debut with The Shining, Woodley has appeared with prestigious opera companies all over the U.S., including San Francisco Opera, Seattle Opera, Opera Company of Philadelphia and Opera Theatre of Saint Louis.

Can you explain a bit about the dynamic of translating a literary and film character into an operatic character?
Arthur Woodley: I have read the book and seen the film, The Shining. That being said, I try to define my character by what is given to me in the opera score. 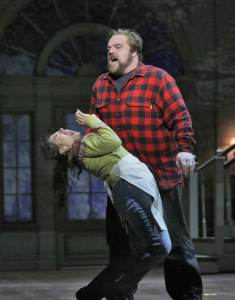 Brian Mulligan as Jack Torrance and
Kelly Kaduce as Wendy Torrance in The Shining.
Photo by Ken Howard

How does it feel to have Stephen King’s blessing, as he signed off on the libretto? Does that add confidence or pressure to your portrayal?
AW: There is always pressure in preparing for an original opera, a world premiere, but it is also incredibly exciting. I am thankful to Stephen King for writing an original and exciting novel, and am so excited that he’s signed off on what we are doing. It makes me feel great about creating the role of Dick Hallorann.

The librettist, Mark Campbell has stressed that this version of The Shining is based on the novel, and not the film. How will audiences notice that difference?
AW: Because the film and the novel focus on such different themes, I think audiences will be able to easily discern the differences between the movie and the opera/novel. The novel is much more human and psychological, and that comes through in the opera’s music.

The buzz up to this point has touted the high-tech staging elements such as holograms and 3-D imaging. What does working with those elements add to your craft?
AW: The high-tech effects add visual impressions that are really exciting for the audience. They serve to clearly tell the story, enhance the characters, and bring this opera to life. These elements don’t change what I do, but it adds to the overall aesthetic.

What is it like originating a role in a world premiere, with nothing to go off of? Is it a blessing or a curse not to have previous depictions to use as research and preparation?
AW: It is a wonderful and proud feeling to be part of the birth of a new piece. It’s a true honor. Even though I don’t have previous depictions of the role to go off of, I do have Paul Moravec’s music, which is all I really need.

The Shining runs at the Ordway Center for Performing Arts May 7–15. For more information and to purchase tickets, head to www.mnopera.org.