5Q: The Realish Housewives of Edina: A Parody

What’s unique about this Hennepin Theatre Trust production is that the comedy will be making its national premiere in Minneapolis before embarking on a national tour. The writers have created a humorous spoof on the “Housewives” phenomenon with local references to the current events and hometown headlines of each city it visits. 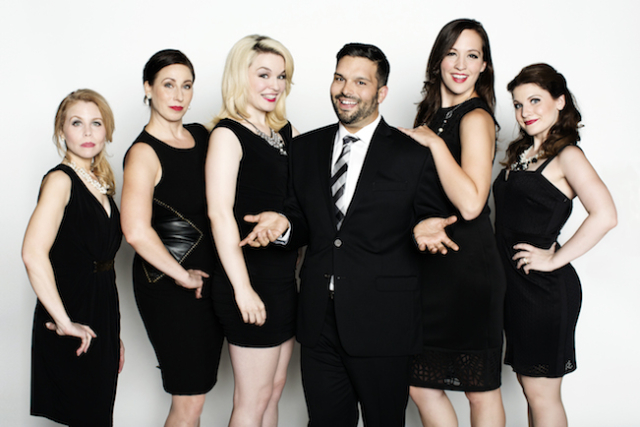 What about the Real Housewives franchise lends itself to parody compared to other reality programs?
Adan Varela: Anything involving high emotions, big personalities, and pop culture status is tailored for successful parody. We are taking a franchise that is already glamorous, decadent, and dramatic and turning the amp up to full capacity. All of this is brilliantly represented in Realish Housewives along with the TV show’s themes of self indulgence, wealth conflicts (old vs. new money), frenemies, and cat fights, etc. Real Housewives is one of the longest-running reality shows. We see a lot of reality shows come and go, but the Real Housewives keeps its viewers because they really develop “relationships” in a crafted way. We hate to love them, and love to hate them.

Is The Real Housewives a guilty pleasure of yours? What drew you to this project?
AV: I love to compare reality shows to a bag of chips: they may be terrible for you but they taste so good, bring so much joy, satisfy instant cravings, are artificially flavored, and are so wonderfully crunchy. And what gay man on earth doesn’t love Nene Leakes and Lisa Vanderpump? WERK, queens!

I have been a long-time fan of Andy Cohen and his many projects. When the audition notice was posted for Realish, a few friends of mine said that I should absolutely go in to audition because apparently Andy and I have many similarities (I’ll take it, he’s fun and very hot!). Also, one of my favorite things to do is laugh and make someone laugh. It had been a long time since I had done an outrageous comedy and that alone was enough to make me wanna play!

What is it like working with the clash between “low culture” like reality TV and the “high culture” of theatre with this parody project?
AV: If you are developing a good and enjoyable product than I have a hard time calling it “low culture.” Yes, some may view reality show like Housewives as trashy but there is a tremendous amount of work, development and risk when producing something as powerful and successful as the show has become. The biggest challenge with Realish is that comedy is incredibly difficult. It takes very skilled and creative people to make comedy work and like any relevant and good theater, it’s about telling a story no matter what the genre is.

“Randy Bowen” is clearly based on Housewives producer Andy Cohen, but how true-to life are the Housewives of Edina?
AV: The housewives depicted in our show are products of delicious ingredients of some of the most popular Real Housewives stars with my character Randy to mix it all up into a hilarious bowl of fun soup. The housewives are also colorful caricatures of the upper echelon of Twin Cities society while paying homage to our local culture through references and well-tailored writing. We lovingly spoof both the TV show and local culture in an over-the-top, exaggerated, fun, and good-hearted way.

The show’s description states that the audience gets in on the act. To what level is the audience involved? Should sheepish show-goers aim for back-of-house seats?
AV: Most of the audience involvement is helping to move the story along and using them as a whole. There are a few individual interactions but they are in good fun, brief, and hilarious. These moments are honestly some of my favorite parts of the production. I definitely wouldn’t want anyone to feel discouraged because of  them!

The Realish Housewives of Edina runs at the New Century Theatre through November 15. For more information and to purchase tickets, head to www.hennepintheatretrust.org.