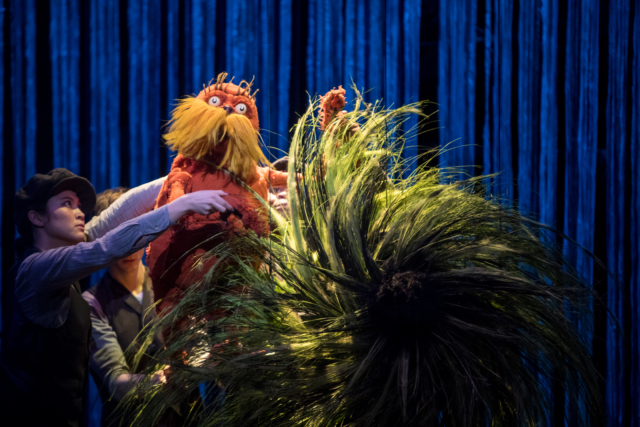 After premiering in London, Dr. Seuss’s The Lorax makes it’s American debut at the Children’s Theatre Company in partnership with The Old Globe (San Diego), where it will open after closing in Minneapolis. The Lorax speaks for the Truffula Trees when an outsider decides to chop them down for their silky tufts needed to knit Thneeds. Disregarding the Lorax’s words of caution, more trees are chopped down until the last tree of the forest falls, causing the culprits to quesion: was it worth losing paradise? Heralded as the most beloved environmental tale of all time, The Lorax is told in the delightfully memorable Seussian rhyme.

Originally produced at The Old Vic in London, The Old Vic’s director Max Webster followed the show across the sea  to stage The Lorax in Minneapolis. Webster has grown a following for his adaptations of opera, Shakespeare, and contemporary theater alike. 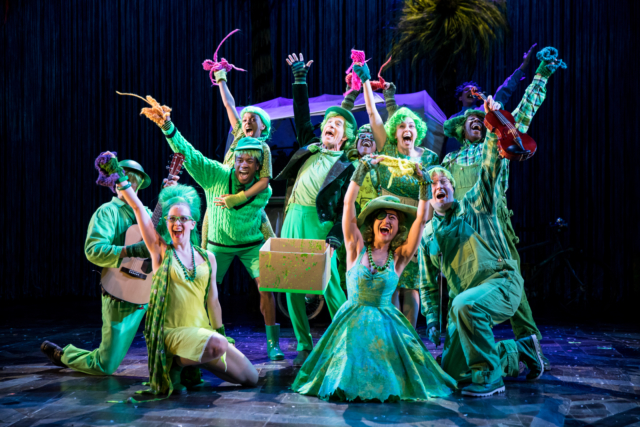 Ensemble in Dr. Seuss’s The Lorax
Photo by Dan Norman3

Children’s Theatre Company has created buzz around quite a few Dr. Seuss stage adaptations. What about these stories is so appealing and makes them so wonderfully translated to the stage?
Max Webster: Dr. Seuss started out with this idea with The Cat in the Hat that you can make reading fun, which meant that you can take something that has a really important message and pair it with something that was silly, lighthearted, and joyful. It opened up an invention of language and color to the imagery and the artwork that it is almost like a sugar rush when you open those books. There’s something really exciting about the images and the zaniness of the language. And that’s exciting for family theater, because obviously when you go to the theater as a family, you want a story that’s engaging and exciting, but also you want fun visuals, energy, and good entertainment. The Dr. Seuss books have a kinetic energy to it, especially when you see it on stage. I know CTC has a long association with Dr. Seuss and it’s really exciting to be a part of that tradition.

The modern references in The Lorax staged in London made headlines. How do you balance that modern take on a timeless tale 50 years after it was first published?
MW: What’s exciting about our production in a way—exciting or sad, depending on how you look at it—is it  didn’t take much to make it feel modern. The Lorax was written in the 1970s during the birth of what we now think of as the environmental movement. In a way, Dr. Seuss was way ahead of his time, but also one of the tragedies of the last few years of our history is that the warnings and problems that we really understood decades ago, as a society, we haven’t yet managed to take action on. There are many key issues with how we look after the world. We haven’t put in place things to safeguard our world. And so the idea of a parable in which an exciting, inventive, but ultimately overly-ambitious guy confronts a Lorax, which is a spirit of nature is, sadly, as relevant today as it was when it was written.

What kinds of conversations have you had around these messages as you’re interpreting this story
MW: What’s amazing is it’s something that everyone really cares about. So often when you make shows, you are searching to find the relevance of the show. Or you are taking an old story (like Shakespeare) and wonder, ‘What are the ways that this resonates now?’ In way, with The Lorax, the relevance is the other way around. The message is so obvious and so urgent, that many of those working on it feel it’s a real gift to work with this material. Not only is it an important message, it is a thing that everyone knows. The fact that it is almost like a piece of folk culture in the world now and that this message is delivered through a vehicle that everyone remembers and cares about is very special.

You’ve talked before about a research and development period before starting rehearsals for the London premiere of The Lorax. What did that entail? How did it impact the final staging?
MW: Staging Dr. Seuss is like setting increasingly impossible challenges. First you think, ‘How do you create a Lorax?’ and then ‘How do you stage the chopping down of hundreds of trees?’, ‘What does a Swomee Swan look like?’ and ‘How do you put a bird on stage, because you can’t have real birds and certainly you can’t have real Loraxes because they don’t exist.’ So there is a scarily long list at the top of the process just on how on earth are we going to do this. What can be a puppet, what can be a song, what can be a scene, etc. So the research and development process was largely trying to knock out these questions and work out the best way to tell this story so that it will be really clear and exciting with audiences.

Critics of The Lorax‘s run at The Old Vic pointed out how different this telling is from the Universal Pictures movie. What can audiences expect from the staged version, especially those who’ve seen the film?
MW: The stage show is very different than the film. The film has great elements, but actually we wanted to be more true to the book because that is where the source material came from. So we followed the journey of the Once-ler. We see his family and where he is coming from, but it’s important to understand that the business of the real world isn’t some evil thing. It has its roots in people’s ambition and invention and it was really important to us that the Once-ler isn’t just an evil baddie. He is a three-dimensional human, so it becomes a conversation between human invention and the force of nature. Also, putting things on film is much different than putting it on stage. In a cartoon you can just animate a bird. But on stage, you have to figure out how you are going to transform it so that you make it feel like the bird, but you give it its own language. So that’s very exciting.

The Lorax runs at the Children’s Theatre Company through June 10. For more information and to purchase tickets, head to www.childrenstheatre.org.