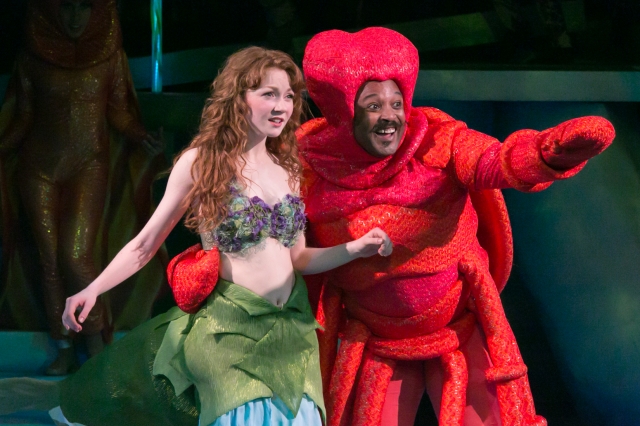 The Little Mermaid is a stage musical produced by Disney Theatrical, based on the animated 1989 Disney film of the same name and the classic story of “The Little Mermaid” by Hans Christian Andersen about a mermaid who dreams of the world above the sea and gives up her beautiful voice to find love.

Nominated for two Tony Awards and a Grammy, the critics gave the show a mixed response, with some praising it, and some calling it “less than witty” and “bloated”. Ben Brantley of The New York Times was especially critical, saying that the “charm-free” musical is “stripped of the movie’s generation-crossing appeal. Coherence of plot, endearing quirks of character, even the melodious wit of the original score (supplemented by new, substandard songs…) have been swallowed by an unfocused spectacle.” Time Magazine, however, commented, “It was one of the most ravishing things I have ever seen on a Broadway stage.” Here are my thoughts on Chanhassen Dinner Theatre’s production of the musical. 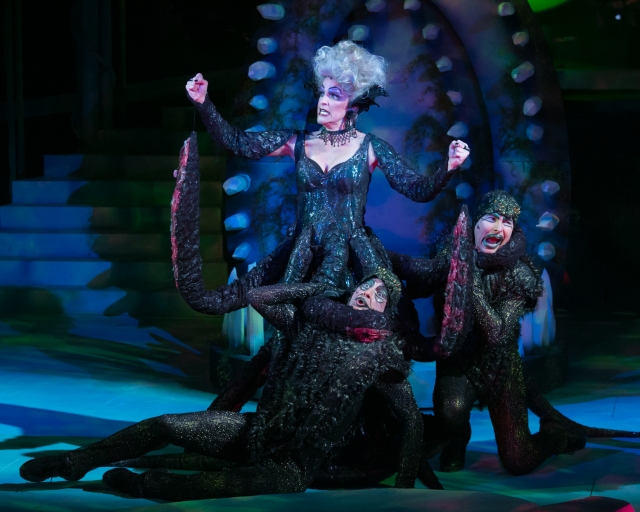 Does Ursula live up to her drag queen roots?
It’s no secret that Disney animators created the image of Ursula based on that of the infamous drag performer Divine. That is easy to see as one sits back and enjoys the animated feature, but does it come to fruition in live performances? Initial images that came out of the originating Broadway show seemed remarkably similar to the illustrations (and, thus, Divine as well), but the depiction of Ursula in her Midwest premiere seems to fall short of the character’s over-the-top nature and her roots in drag queen imagery. Yes, she has eyeshadow for days, but is that all that her look is boiled down to? I would have liked to see something more.

Who is this show for: children or adults?
In a short answer, I would say both. Obviously, being based on a Disney classic, children will be attracted to the show. What with its bright colors, familiar tunes, and whatnot it is no wonder that the smaller among us will be bouncing in our seats. Yet, as is so often true of live theater, there are remarks that will go right over the children’s heads. Yes, adults, there is humor in here even for your older ears.

Why don’t Ariel’s sisters have a reality show?
Ariel’s six sisters (all with names beginning with ‘A’) fight, shriek, and create chaos better than any cast in the Real Housewives franchise. Which begs the question: When is Andy Cohen going to pony up the production dollars to create Real Housewives of Atlantica? Attina, Alana, Adella, Aquata, Arista, and Andrina could throw cocktails with the best of them (though I’m not sure how that works underwater?) and you know the line “You mess with one of us, you mess with all of us” would occur at some point. Don’t make a mermaid take off her seashell earrings! 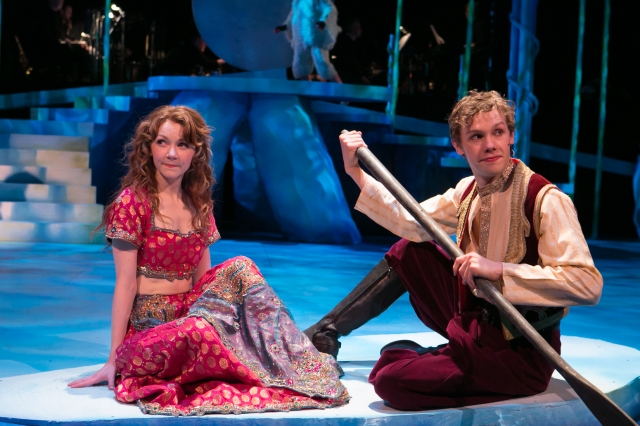 What country’s shores play host to this story?
It’s long been decided that Little Mermaid occurs off the coast of Denmark. Why, then, do Rich Hamson’s costumes bring about feelings of post-colonial India? For fans of the animated Disney story, it is somewhat jarring to see beloved characters suddenly wrapped in silks and materials that originate nowhere near Denmark. Well, there is a simple reason for that: many of the more elaborate fabrics indeed came from India. Hamson knows a woman who has an Indian fabric shop. Knowing what Hamson was looking for, she brought back silks and embellishments for Hamson during one of her buying trips to India. Although the costumes are gorgeous (what else do you expect?), I wish Hamson would have stayed closer to the story’s roots and gone for a more Danish vibe when dressing the human characters.

What other wonders could lyricist Howard Ashman created, had he lived?
Ashman, who died of complications related to AIDS, was part of Disney’s golden era. Partnering with Alan Menken, the two created some of the most memorable and show-stopping music that revamped the Disney brand in the early 90s. Working on such treasures as Aladdin and Beauty and the Beast in addition to The Little Mermaid, Ashman is a true American treasure. He had even been awarded Oscars and Grammys posthumously (awards which were accepted by his partner, Bill Launch). Had his life not been cut short by AIDS, I can only imagine what other cherished animated features he would have worked on, creating memories for countless children and adults alike.

The Little Mermaid runs at Chanhassen Dinner Theatres until August 30. For more information and to purchase tickets, head to www.chanhassentheatres.com.