5Q: The Book of Mormon

The Book of Mormon, which played record-breaking, sold-out engagements in 2013 and 2014, returns to Minneapolis as part of the Bank of America Broadway on Hennepin Season. Featuring book, music and lyrics by Trey Parker, Robert Lopez and Matt Stone (Parker and Stone are the four-time Emmy Award-winning creators of the landmark animated series, South Park), The Book of Mormon has been thrilling audiences across the globe.

The religious satire follows two missionaries sent to a remote region of Africa. A musical comedy, the show isn’t for everyone. Religion, race, poverty, and sex are all fodder for humor as Elder Cunningham and Elder Price go off to Uganda to try and convert citizens to Mormonism. As a member of the ensemble, Jake Emmerling has been with the national tour since the beginning. 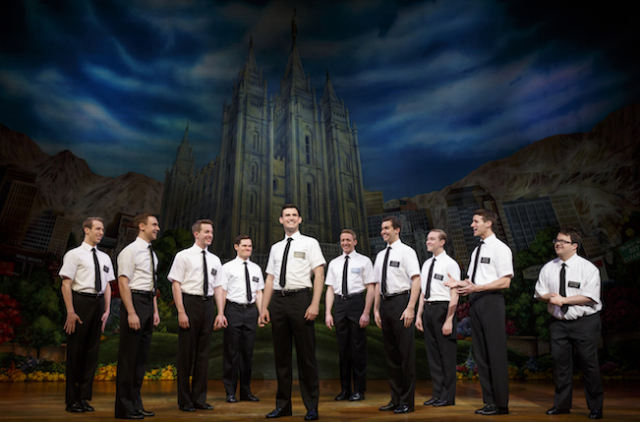 The Book of Mormon company.
Photo by Joan Marcus

You’ve said before that if you’ve never seen a musical before, The Book Of Mormon is the perfect way to get started in the musical theater world. Why is that?
Jake Emmerling: If you’ve never seen a musical before, it might be weird and/or hard to grasp that someone is singing about how beautiful the morning is, discovering their sexual identities, or just singing to the audience in general. The Book of Mormon lovingly takes musical theater history and mimics a lot of it’s great elements, all the while through the eyes of Matt Stone, Trey Parker, and Bobby Lopez. Since it’s through Matt and Trey’s eyes (with the coupling of Bobby’s musical theater background), there’s a feeling of an outside view into musical theater, which is why I think it’s so easy for newcomers to appreciate and enjoy the show while getting a great taste of the art form.

You’ve been involved with the tour since the beginning, and The Book of Mormon has been to Minneapolis a few times. What’s it been like to be in the same show for so long?
JE: It’s actually quite fun to see our show grow and change over the three-and-a-half years it’s been going on. Only four of us are original company members (Eric Huffman, Monica Patton, David Aron Damane, and myself), so every time we get a new person in the cast, it’s changed the energy of the show in such a great way. I’m always asked if I’m tired of the show and I’m honestly not! It’s such a fun show to do and audiences around the country have been so receptive to it that I love to perform it for a new audience every night. I also try to change the show in little ways to keep it fun and interesting for me — still the same show, just giving myself different tactics and challenges as a character so that I can see scenes in different ways.

Being a part of a show for so long is something that not everyone experiences, what have you learned from the experience?
JE: That’s so true, I jokingly said to my college professors that you can’t teach this in any classroom setting! With Book of Mormon, our show is beautifully monitored so well from so many creative people. Because of that and with new cast members coming in every few months, we will clean things up and change little things here and there. It’s not the ‘same’ show with energy, beats, and timing since we opened in December 2012, but it shouldn’t be. We aren’t a machine and new people bring new life to the show. Obviously the show is the same (the script and score never changes) but we will get different colors, nuances, takes on scenes that it keeps it fresh for everyone involved and on our toes.

The show kind of pokes fun at the Mormon religion but you’ve said before that the overall message is more about having faith, no matter what you believe in. Can you tell me a bit about that?
JE: Well, I don’t want to give too much of the show away, but I can say that it’s exactly what I stated before. What Matt, Trey, and Bobby do is use the Mormon religion as a doorway to talk about religion in general. Of course every religion has some teachings and scriptures at face value where you might cock your head and go, “Really?” But they obviously aren’t meant to be taken so literally. The show has fun with that idea, taking things at face value, and laughing about it, but the heart of the show is always there throughout and wraps it up beautifully: find what you believe in and have faith in it.

You’ve also said that there is actually a lot of heart in the show, underneath the humor. Do you think that’s something people are surprised by?
JE: Oh yes, very much so. Especially now when press and word-of-mouth gets around saying how “raunchy” or “shocking” the show is against religion, I still get audience members that tell me “I thought it was going to be much worse!” because outside influences have built it up so much. Yes, it’s satire, but I think it works even better because there are some real, honest characters in our show. My favorite line in the entire show is in “Hasa Diga Eebowai”: If you don’t like what we say, try living here a couple days / Watch all your friends and family die… which is directed right to the audience. They are saying “Yea, you think it’s funny and/or shocking that we are saying these things, but step into our shoes for a bit and see if you’d be preaching the same thing to us.” Most of the show is hysterical but the honesty of the characters makes the dramatic moments come down even harder which, I think, catches people off guard and feel for the characters.

The Book of Mormon runs at the Orpheum Theatre through May 29. For more information and to purchase tickets, head to www.hennepintheatretrust.org.