Known for both theatrical as well as television and movie work, Melvin Abston graces the stage once again in the touring production of Sister Act. Having originated the role of TJ, one of Curtis’s henchmen, he returns to the national tour as Curtis, the bad guy himself.

Nominated for five Tony awards, the show follows disco diva Deloris Van Cartier who, having witnessed a murder, is put in protective custody in the one place cops are sure she won’t be found – a convent! Disguised as a nun, she finds herself at odds with both the rigid lifestyle and an uptight Mother Superior. Using her fabulous disco-ness and killer voice to inspire the choir, Deloris breathes new life into the church, but in doing so blows her cover. Based on the feature film, Sister Act’s original score features musical styles from Motown, soul and funk to great big disco anthems and Barry White-inspired musical comedy. 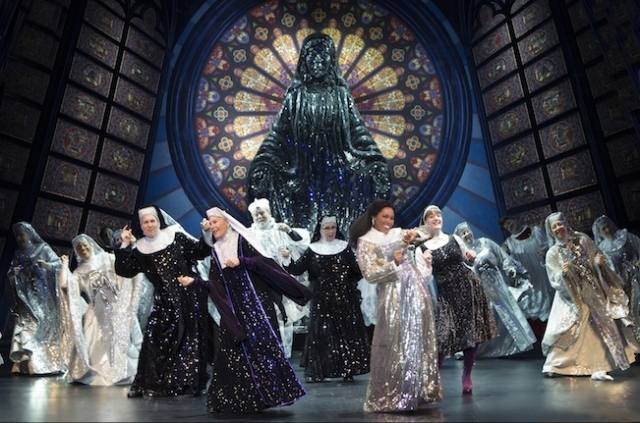 The cast of Sister Act
Photo by Joan Marcus

Various reviews herald the overall theme of the show as “spread the love” or that despite differences, we should all come together and love one another. What is your take on that, or what do you see as the overarching theme?
I’ve always referred to this as a fish out of water story. The motivation for Delores to find herself is that she sees something she shouldn’t. Once she is there with the nuns, she is put in a situation where she is not familiar with the ins and outs of the nunnery. She is made to do some things she hasn’t done before and in doing so she shows her own personality and shows the nuns and mother superior a different way of doing the same things they had been doing. But at the same time they also show Delores a different way of doing things she has done, like caring for people other than herself—putting others first—essentially, learning some of the golden rules. I wouldn’t even just say Catholicism or anything of that nature, just how to treat people. The “spread the love” theme is absolutely true. It’s the big number at the end of the show, but ultimately you don’t know it all and it’s not that she can’t afford to learn something that makes her a better person.

Having originated the role of TJ, one of Curtis’ bodyguards, what’s it been like moving into the role of Curtis? Or seeing the show morph as it goes on tour or new people join the cast?
I’ve enjoyed it. I’ve reveled in it. Being the bad guy is always fun; there are certain things you can get away with doing. Whereas you have a responsibility, if you’re one of the other characters, to always be bright, sunny, and chipper, and be the walking version of musical theater. With Curtis if I’m a little tired and didn’t sleep well or sore and something hurts, I can use all of that and I’m allowed to certainly, as Curtis, provide that opposite element that is usually predominant in musical theater: the danger, the antithesis of everything that’s going on. When that is done well, it’s rewarding because when the hero wins, it’s despite everything the bad guy has thrown at her.

It’s very interesting seeing new people come in and have their own interpretation of the show. When you jump on the train, the same thing always happens: people fall right into line. The sound of the show never changes. Everyone has their own individual voices, but when they know what is already there it is that same sweet sound you hear night after night blaring out into the audience. I’ve seen quite a few come and go and everybody has their individuality. In fact, there are instances where I say ‘OK, I’ve seen what this is going to be,’ but someone will do something brand new that I haven’t seen before. There is a rejuvenation—fresh energy. It’s appreciated. People come in having done their homework and bring a piece of themselves into what we’re doing and it makes it so much more rewarding when that happens. It’s live theater and for me that’s one of the biggest thrills: to see what other people bring to it. 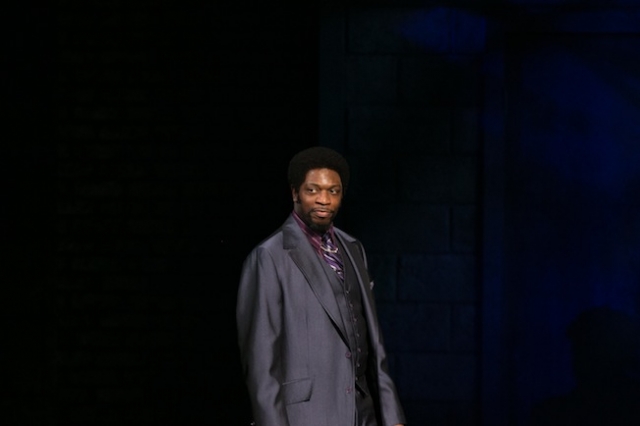 You got to work with (gay icon) Raven-Symoné on the Broadway production before going on tour. What was that like?
She is a hoot. We had such a good time. There are a couple things that pop into my head where she inverted one of the lines at one point and didn’t cover it up. The line essentially goes ‘sing for the Savior, sisters’ and she said ‘sing for the sisters, Savior.’ It was like everyone knew and no one was appalled. It played into her role of this Delores character that doesn’t quite have it right but her heart is in the best place possible. She was so vibrant and alive and funny. Some people had doubts about her holding her own vocally and driving the show but some of those notes and songs just came so natural to her. It was infectious. Everyone wanted to reach that level and push and do as much as she’s done. That raised the quality of the whole show and, when the show wrapped on Broadway, the end of the show was just as alive and vibrant as the beginning.

Why did you decide to join the tour? What do you enjoy about touring?
There is something about being able to continue to tell the story. I truly do love this story from the first moment I’ve had the opportunity to be a part of it. With so many shows out that talk about different subjects—some heavier than others—this is, you know some may call it fluff, but there is a great message in the show. To go out and tell people to spread the love and be a part of filling the hearts and ears of people with this message…with everything going on in this country, with racism and lack of opportunity and bigotry, to go out and talk about love and sing these songs is amazing. There is nothing like, in the face of all this stuff going on in this day and age, to proudly sing about love and tell this really fun story. People don’t realize how much heart there is to that show until it hits them. And it hits everyone in a different place in a different way, but when it does, it’s undeniable and I couldn’t not be a part of that.

Broadway adaptations understandably drift from the movies they are based on. For lovers of the film, what would you say about the changes they’ll see in the stage production of Sister Act?
The story itself is going to be the same. Where it’s different is our show is set in the 1970s instead of the 1990s. We are set in Philadelphia instead of Reno and San Francisco. All of our music is original and the lovers of those great musicals (Beauty and the Beast, The Little Mermaid, etc.) are going to love this because it’s the same guy, Alan Menken, who has won every award available, practically. There is plenty of heart and emotion to be felt. Even after all that, when it comes down to it, when people want to tap their feet and shake their shoulders and stuff, do it! That’s what this is all about with musical theater, to get that visceral response right way. And when we get that, we know we are on the right track.

Sister Act runs at the Orpheum Theatre until June 1. For more information and to purchase tickets, head to www.hennepintheatretrust.org.