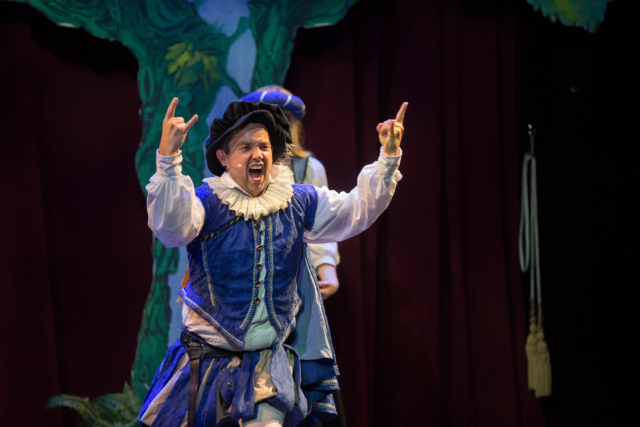 Fans of Drunk History and all its slurred history lessons are sure to enjoy Shit-faced Shakespeare, which is the highbrow fusion of “an entirely serious Shakespeare play with an entirely inebriated cast member.” Magnificent Bastard Productions presents a rendition of Shakespeare’s A Midsummer Night’s Dream with one drunk cast member throwing curve balls at the rest of the cast.

Side-splitting, raucous, and completely unpredictable, the show has been running since 2010 and has already entertained over 45,000 eager theater goers across the U.K. The show has made its way stateside with a successful run in Boston and Austin since 2015 and will debut this spring in London’s West End. With a genuinely drunken professional actor selected at random every night, no two shows are ever the same. Creator and director Lewis Ironside seeks to introduce a new generation of theater-goers to the works of the Bard by reviving the raucous, interactive, and vibrant nature of Elizabethan theater with a very modern twist.

Can you tell me a bit about how you got the idea to create Shit-faced Shakespeare and why it works so well?
Lewis Ironside: The idea came about some 10 years ago in the U.K. when myself and my old business partner, Cpt. Chris Snelson, got plastered one night while attempting to devise some brilliant theater. We woke up with a damp scrap of paper the next morning which had the words “Shit-faced Shakespeare” scrawled across it in the company’s official green crayon. We took a very cursory glance at this, decided it was a terrible idea and shelved it for about three years.

Some seven years later we were (remarkably) put in charge of running our own itinerant theater space at U.K. music and arts festival. We decided that we’d like to put Shit-faced Shakespeare at the head of the bill and the very first show was performed one fateful Friday night. That first show was about 15 minutes long and resulted in an ambulance of paramedics rolling up to the door of the space to cart away our incapacitated actress. We immediately cancelled the following night’s show and vowed never to attempt anything so idiotic every again.

The following morning our actress was returned to us from her overnight stay in a medical tent and begged us to let the entire cast have another go. We eventually relented, but only on condition of a more sane approach being taken to the drinking aspect of the show. We made sure that the drinking happened over a longer period of time and had it monitored very closely by all the cast. Our second show was a complete success and was only cut slightly short by the fire brigade’s arrival. Word had gotten around the festival that we’d actually killed someone on stage the previous night and more than double the venue capacity had turned up for the show, putting us way over our fire-safe capacity.

As to why do it at all; there’s a certain stuffiness that surrounds Shakespeare and his plays and it’s genuinely delightful for us to have our audiences come to see our shows and actually laugh at the productions sincerely. Even when the drunk is not on the stage we take a lot of care to produce a genuinely funny comedy and it’s often people’s first post-school exposure to these stories. This is why I think it works so well! Because we really care about these stories and the quality of the play; it’s hilarious to see a team of professionals struggle with the impossible problem of trying to perform while a drunk actor is on the rampage. 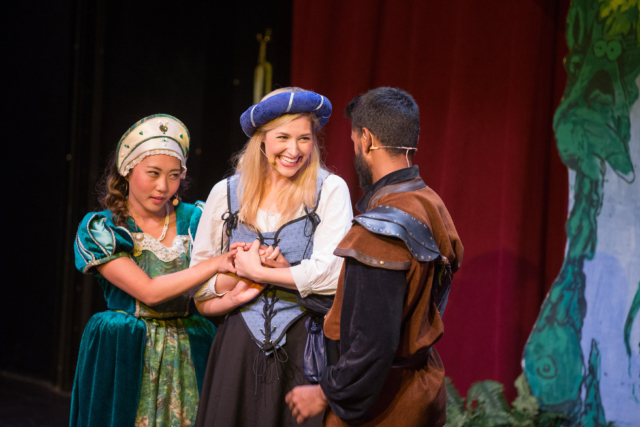 Shakespeare has quite the resume, so how do you decide which texts to use?
LI: We have a number of shows running all over the U.K. and America and, while most of them are Shakespeare’s well-known comedies, we also perform some tragedies such as Romeo and Juliet and Macbeth. We’ll even take on some of his more obscure works like Two Gentlemen of Verona, which are rarely performed. We basically look for a play of his which is fun, has a good gender balance of characters (our company is roughly 50/50 male/female and we’re fiercely proud of that) and also where we see these characters interact in different pairs or groups (it’s no fun if the drunk has only one other performer to play with on stage). We also look for shows with big silly set pieces which has led to four-way sword fights, 20-foot long rope ladder escapes, and even “Joffrey,” our infamous full-size, wheeled land-gondola (we named him Joffrey as he was a spiteful and uncontrollable bastard).

Shakespeare’s plays are packed full of great moments and, while they aren’t all going to work for us, many are perfect with some minor modifications. We’ve got plans for our upcoming new shows well under way and we’ll have around nine complete productions in rotation by the end of this year.

With a drunk cast member, we know that no two shows are ever going to be the same, but how do you decide which cast member/character is going to be drunk that night? How much improvisation work do casts do to prepare?
LI: We discovered quite early on that this only works well with a lot of preparation and concern for safety. To that end, our cast members know weeks (sometimes months) in advance before they’re scheduled to perform drunk. We have a large, rotating cast group with at least two actors per character, so we’ll always have backup cast members and nobody ever has to drink too frequently. It’s usually around once each per month and never, ever more than once in any week. Everybody gets to drink what they choose so we prepare each drinking night individually. They’re each given a full four hours of carefully monitored drinking time before each show and all their drinks are poured for them.

The improvisational element of what we do is major part of both the show and the skill of our performers. It’d be no fun putting a drunk in a play and just ignoring them, so we encourage our performers to work around the problem, to always acknowledge what our inebriated performer is up to and to incorporate their behaviour and plot changes into the world of the play. It’s an immensely difficult job and even after seven years of playing it, I still discover new games, gags, and moments of madness each time I’m on the stage. All that being said, there is no perfect way to prepare to work opposite a drunk and it’s very much a game you learn to play while “on the job.” 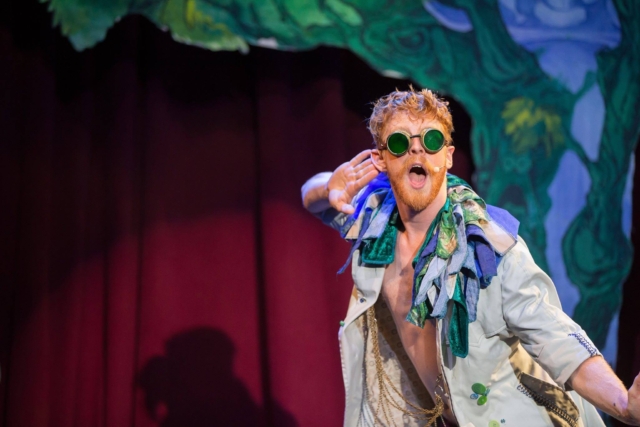 Most shows have a big moment or two like that, but in general we strive to keep the show mostly on the rails where possible. We have a character called the compère who hosts each show and is responsible for wrangling our sloshed thespian throughout. The aim is to let the chaos happen but to always pull it back to the Shakespeare play by the end of the show. Chaos and control have to both be present in order to make the other entertaining. That said, we do allow the audience to stop the show if the drunk appears to be sobering up and our compère will issue them another drink to help keep the chaos rolling.

Shit-faced Showtime debuted in the U.K. in 2015, taking on musical works. What other plans do you have for taking on other writers?
LI: Shit-faced Showtime is our (currently) U.K.-only musical show and they’ve just tackled Gilbert and Sullivan’s The Pirates of Penzance and are about to move onto The Wizard of Oz for this season’s show, which will be “Wicked”… ahem.

Shit-faced Shakespeare runs at the Camp Bar through Feb. 25. For more information and to purchase tickets, head to www.shit-facedshakespeare.com.