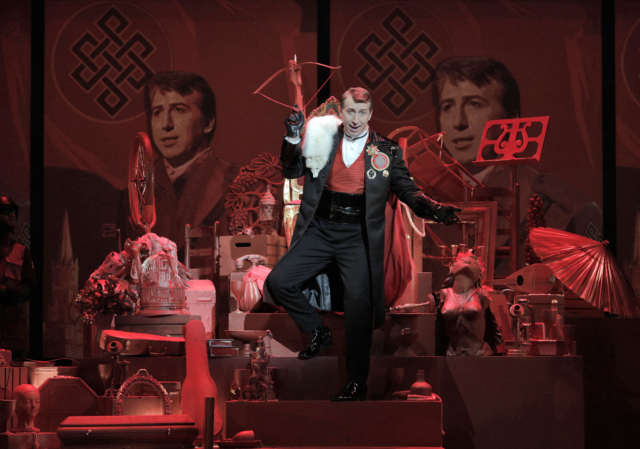 Joshua Dennis as the Duke in Minnesota Opera new production of Rigoletto. Photo by Cory Weaver

From the start, even the Victor Hugo play that Rigoletto is based on, Le roi s’amuse, was banned by the censors after its first performance. When Verdi adapted the play into an Italian opera, he changed Hugo’s immoral, womanizing French King into an imaginary 16th century Duke from an extinct family line in order to make it “acceptable.” This time-honored tale of seduction and bitter revenge is boldly imagined in this new production by Minnesota Opera. The disfigured jester Rigoletto must do everything in his power to protect his innocent daughter from the lecherous Duke of Mantua before she falls into his clutches.

Playing the Duke is a tenor who is no stranger to Minnesota Opera Joshua Dennis. Audiences may recognize him from his turn as Romeo in 2016, but opera goers will see a different side of Dennis as the Duke, a powerful, abusive womanizer who lies, bullies, and assaults to get what he wants, especially when it comes to sex. As stage director Austin Regan says, “He never faces any consequences for his actions. Rigoletto and the chorus of wild, frat-boy aristocratic men look the other way and even enable the Duke, hoping to gain his favor for selfish power and patronage.” 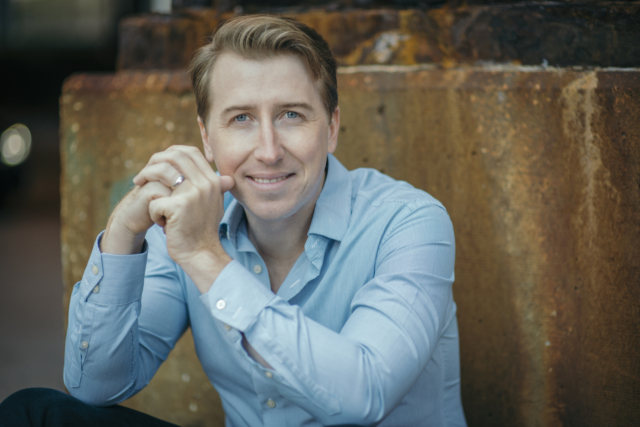 Stage director Austin Regan has said that the goal was to reinvigorate what was exciting and important to the original authors, in a way that spoke to our times. How does that play out on stage? What can audiences expect?
Joshua Dennis: The first thing audiences can and should expect is great music. It is amazing that with all of our technological and societal advances of today that we can still connect to this music which was written almost 170 years ago. Since the music still resonates with us, it is easier to interpret this story in modern times. The role I sing is an entitled, rich, and powerful man who uses his stature to seduce women and get what he wants. Does any of this sound familiar in today’s society? Of course it does. You are going to hear timeless music paired with incredibly relevant topics.

Tenors usually sing the hero role, but the Duke is one of the exceptions to the rule. From an acting standpoint, is it interesting to sing an “evil” character?
JD: We have tried to make the Duke as personable and charming as possible. That has been really interesting to research. I Googled “sexiest dictators in history” to see what that would look like! It was very interesting studying rich, powerful dictators and their mannerisms. What I found is that they are no different than we are. Often they slouch in their chair or make weird faces. They are very comfortable and cocky. That is the Duke you are going to see and that makes it a little more unsettling in my mind, that real people like this exist.

Joshua Dennis as the Duke in Minnesota Opera new production of Rigoletto.
Photo by Cory Weaver

Many people have said the character of the Duke loses his humanity and people only see his poor qualities—how do you put the humanity into the role?
JD: I don’t think he ever lost his humanity. I think he is a reflection of many aspects of humanity. He represents the patriarchy that has ruled the world throughout history. Just because he is rich and powerful and treats women like objects, doesn’t mean he doesn’t feel sadness, like in his second act aria when Gilda is taken away from him. I think he truly gets sad, and that is infuriating because we don’t want our villains to have human emotions.

The Duke’s poor qualities as a womanizer are also very poignant with the national discussions going on right now around the #MeToo movement and men in power. Are current events something you thought about as you prepared for this role?
JD: Absolutely! Our director, Austin, and I talked about that issue the first time we touched base about this role. We talked about people in the spotlight who are like the Duke. Seeing that the Duke gets away with his behavior and that people today are starting to be called out is a testament to our time.

As a power hungry womanizer, he falls for a commoner, Gilda. At moments it seems like he loves her, and then things turn. How do his feelings for Gilda impact him?
JD: His feelings for Gilda impact him so briefly. He loves the chase. I also think he’s feelings are real and intense, but he is just a terrible human being. He loves conquering things that aren’t his. Once he gets her he moves on to the next conquest. He is so good at it that Gilda falls madly in love and saves his life. The saddest part about it all is that he will never know her sacrifice and he never deserved her love in the first place. It’s heart wrenching, but the duke is blind to the whole thing once he’s already slept with her.

Rigoletto runs at the Ordway Center for Performing Arts through March 31. For more information and to purchase tickets, head to www.mnopera.org.