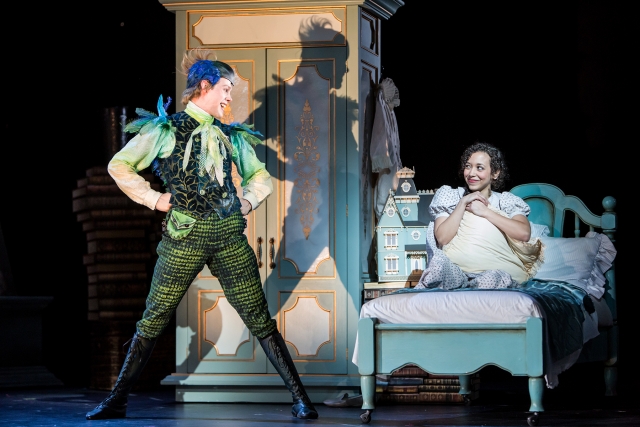 It’s Peter Pan like you’ve never seen it before, complete with Tinkerbell (You better clap! You better believe!), Peter, Wendy, and Tiger Lily (although you’re in for a surprise with that one). Join the magic in the Children’s Theatre Company’s first production of one of Broadway’s most beloved musicals; fly to the second star to the right and straight on ’til morning!

The show is updated to do away with harmful stereotypes and engage the audience in whole new ways with unforgettable musical numbers. Alanna Saunders takes on the role of Wendy, fresh off her stint as Tiger Lily on Peter Pan LIVE! on NBC. You’ll be enraptured by her talent as she draws you into the magic of the show. Alanna took the time to answer some questions about the production.

You played Tiger Lily in NBC’s Peter Pan LIVE! in December and now here you are playing Wendy. What about this story draws you in so much?
Alanna Saunders: This show is about the innocence of the heart and of childhood. You get to live in Neverland for a few hours, where everything is possible. Getting to live in that magic and that imagination where you live forever, exactly how you want, is such fun. It fills the part of the soul that you forget as an adult too often and you get to play!

This show was also one of the first musicals I did as a child. When I was 10, with my twin sister, I played one of the twin lost boys. The music and story have been close to my heart for years.

What drew you to children’s theater? What kind of magic does this avenue have that traditional theater doesn’t?
AS: Children’s theater is more interactive than most and you know that the majority of your audiences will be children. You speak and perform directly to kids, at their most influential stages. The magic of maybe just affecting one of those kids, to treat someone differently, to think about the world differently, to enjoy childhood a little longer, or to get them to fall in love with theatre — its the reason why we do what we do. 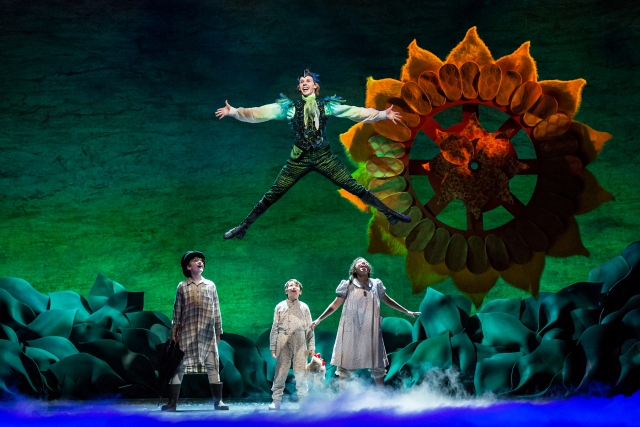 How was your approach to Tiger Lily different from that of Wendy? What are you bringing to the role of Wendy?
AS: Tiger Lily was powerful and strong. She knows who she is and what she stands for. In many ways she was harder for me to reach. I generally play vulnerable characters. The idea of being a strong leader of this tribe in Neverland was scary for me. I had to work on staying grounded.

Wendy has much more wonder about her and natural curiosity. She lives moment to moment and wears her heart on her sleeve. She loves hard and true, and that comes much more naturally to me. Wendy’s challenge actually comes in how old she is, and how much younger she is than me; the challenge of being true to age and not just “acting” it.

How has the understanding of cultural differences between now and the 1950s (when it was written) impacted the show?
AS: CTC has worked very hard to make this a multicultural show. It is about telling a story and reaching our audiences. The Darling family is not all one ethnicity, neither are the lost boys, pounce, or pirates. In the ’50s that would have probably been an issue to audiences, and gotten in the way of telling that story, but in this day and age, it can only help illustrate the theme of child-like innocence, where differences don’t matter.

The Disney children’s film relied pretty heavily on stereotypes, both of Native Americans as well as what it means to be a boy or a girl, etc. How are those dealt with in this production?
AS: We have gotten rid of all references, both derogatory and not, to Native Americans. Those Native elements have been removed so that it is no longer part of the show. There is no question about what may or may not be offensive. CTC is setting a new standard for Peter Pan The Musical.

We also have tried to get rid of stereotypes of gender. Although the Pounce is all female, and the Lost Boys are all male, our show very much works to put them on equal ground. The girls are feline-based, and the lost boys are bird-like, the pirates — of the sea. Peter Pan and Tiger Lily are equally complimentary to each other. The idea of a “mother” is very ingrained in the show but we have tried to rid all references that classify boys and girls differently.

Peter Pan The Musical runs at the Children’s Theatre Company through June 21. For more information and to purchase tickets, head to www.childrenstheatre.org.