5Q: Peter and the Starcatcher

Luke Smith, portraying the character of Smee, took the time to answer some questions about his role in Peter and the Starcatcher. The winner of five Tony Awards®, this prequel to Peter Pan has been gaining traction with audiences across America. You’ll never forget the performances in this musical play, which takes a hilarious romp through the Neverland you never knew. 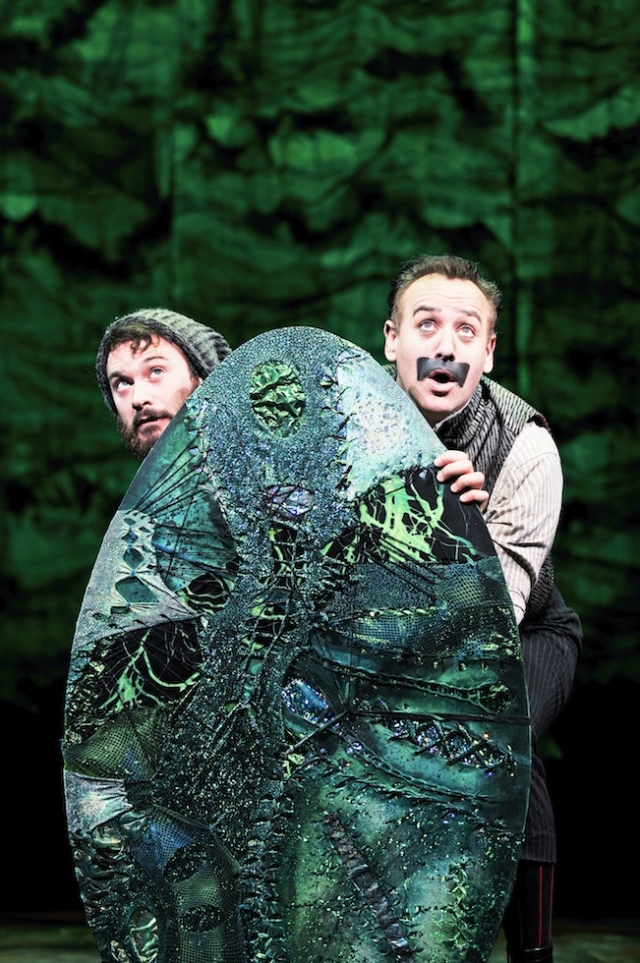 Luke Smith (Smee) and John Sanders (Black Stache) from the Peter and the Starcatcher Tour Company.
Photo by Jenny Anderson

What is the most difficult thing about portraying your character? The most rewarding?
The most difficult thing about doing this character is the character’s voice, being able to maintain and sustain it for eight performances a week. As pirates, we have a lot of yelling and intimidating to do, and so it’s important to be aware of how to do it in a healthy way, otherwise you’re left without a voice by the end of the week.

This, in turn, is actually a good example of what I love about performing this play, and that is the journey of keeping the performance alive and fresh every night. This is the longest stretch I’ve ever played a single character over time, and part of the joy is actually the struggle of problem solving: going home and asking yourself “What worked that night? What didn’t work? What can I do to make this or that aspect of the storytelling more clear?” That is the part of the work I love doing, and I am very lucky to be able to apply it to this fantastic play.

Theater, especially the story of Peter Pan, is notorious for gender-bending acting (women playing a boy, in this case). What are your thoughts on how far theater and society has come with topics such as this?
It’s an interesting question…  One could almost say that we’ve gone a bit backwards on gender-bending from Shakespeare’s time, where all the characters of his plays, male and female, were played by men. I love that Mark Rylance has brought the “original practice” of Shakespeare back to New York with his production of Twelfth Night because I think it’s important for American audiences to see. Gender-bending contributes to the most wonderful aspect of the theater in that if you stand on a stage, state that this is the given circumstance, i.e. “I am a man playing a woman,” the audience goes along for the ride. Not so easy to do in film… Now who’s going to bring an all female production of Hamlet to NYC?

People have read a lot into the relationship between Smee and Captain Hook in previous tellings of Peter Pan. Can you talk about the relationship between Smee and Black Stache in the show?
Codependency is the word that best describes their relationship. Smee’s single most important objective is to please his captain, which is clear from the onset. What’s less clear, perhaps, is that Black Stache relies on Smee’s loyalty. The king is only as powerful as his subjects allow him to be. So the result is a pairing of people who don’t go anywhere without the other. In this, and many other aspects of the show, John (the actor portraying Black Stache) has been sensational to work with. We are most definitely a team up there, and are in constant dialogue on how to improve the performance. I have learned a great deal working with him.

What are the challenges of retelling such a beloved children’s tale in a new way?
I don’t really view it as a challenge, but it’s rather a joy to give our take of who these characters were before they became the characters that everyone knows and loves. It’s fun to think about what Smee and Captain Hook were doing before they got to Neverland!

What advice or words of wisdom would you give to first-time viewers of the show? What can they expect?
Come with an eagerness to expand your imagination, expect a bit of the unexpected in the way we are telling the story, and I believe you will have a wonderful time laughing your faces off for a solid two and a half hours in the theater.

Peter and the Starcatcher runs at the Orpheum Theatre through March 16. For more information and to purchase tickets, head to www.hennepintheatretrust.org.