“5Q” is an online-only column featuring five questions about stage productions in the Metro Area with a special focus on the GLBTQ community’s relationship to the production. Periodically, “5Q” will take the form of an interview with actors, directors, writers, etc. to shed some light on the production process. Note: this rendition of “5Q” features six questions instead of the standard five.

Claire Wellin, a graduate of Minnesota State University, Mankato, portrays Réza in Once. Originally from Bismarck, North Dakota, Claire is also a violinist and leads the Chicago-based indie group “Youth in a Roman Field” while also contributing to the folk outfit “Glad Fanny”. Without disclosing any spoilers, Claire takes the time to answer questions about her role, the show, and her take on love.

The winner of eight Tony Awards, including Best Musical, Best Actor, and Best Book, Once is a story of a Dublin street musician who’s about to give up on his dream when a beautiful young woman takes a sudden interest in his haunting love songs. As their chemistry grows, his music soars to powerful new heights…but their unlikely connection turns out to be deeper and more complex than your everyday romance. 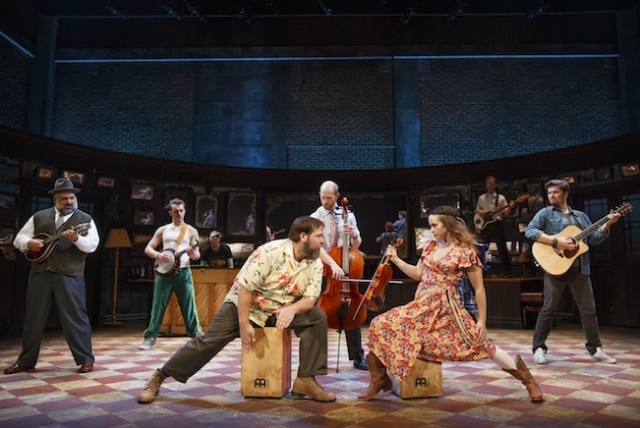 Claire Wellin and the “Once” cast.
Photo by Joan Marcus

It’s not often that lead characters are left nameless. In the story of Once, naming the lead characters Guy and Girl was obviously a deliberate choice. All of the other characters are named, such as your character, Réza. What are your thoughts on the meaning/use of nameless characters?
One of the reasons this piece is so unique is because the romantic relationship in question is much more real and complicated than a lot of relationships in other commercial plays and musicals. I think that’s why so many people are so connected to and affected by it – it’s an “everyman” story in that way. And having the main characters remain nameless helps support that.

Stylistically, Once is also much different than traditional Broadway shows in that the characters are also the orchestra. What has that been like?
Exhilerating, liberating, difficult! I believe in music’s power as a universal language, and for us onstage – communicating without words but with music during so much of the play – that creates an even deeper and stronger and more mysterious connection. And that, in turn, translates to the audience and makes for a really singular experience.

Have you found that your experience playing instruments has impacted your career? For example, you have been in multiple musicals where you play violin as well as play a character.
Oh, absolutely. I have played the violin in a couple other productions, and what got me to really play again (I didn’t play hardly at all in college and right afterward) was this incredibly beautiful and haunting piece at Lookingglass Theatre I did in 2012 called Eastland. That show, which was also a folk musical, got me playing and writing with other people again and set me on the path to be able to play Once. I am a person who is interested in and inspired by a lot of different kinds of art, and I don’t think I would so enjoy the acting part of my life without having the music part to balance it out, and vice versa. The bottom line is that it challenges the way that I think about storytelling – having different ways of executing it. It gives me more tools with which to communicate. I’m doing a play, then I’ll be hungry to play my own music, then I’ll be itching to sit in with a combo and sing standards, then I’m wanting to get back into pilot season, and it goes around and around like that. It’s led me to the beginnings of what I hope will be a varied and interesting career. There’s just a lot to be a part of. I want to contribute a lot of different things to the world and I’m thankful to have more than one creative outlet.

Do you find this challenging and do you feel playing the instrument influences how you portray the character?
Yes, yes, a thousand times yes. I am a totally different player now because of Réza and because of being in the room with such giving and committed and intensely-playing musicians and actors. Martin Lowe, our music director and arranger, has encouraged me from day one- truly since my first audition for Once- to play more aggressively, with more abandon and fire. And he continued to help me develop that throughout my time on Broadway and in rehearsals for the tour, and I am so thankful for that. And oh, do I enjoy playing more now! There are a lot of inspiring things about Réza, especially her attitude about others’ opinions of her, that I have taken with me into my non-stage life.

Having graduated from MSU, Mankato, and then moving to Chicago (with time spent in New York with Once on Broadway), what does it mean to you to return to a Minnesota stage?
Oh that’s just the most amazing thing about being in this tour: bringing it all around the country, and to so many of my friends and family members in the process. To share this story with people I love, with people who’ve shaped and inspired me, is magical.

Once runs at the Orpheum Theatre from April 1 to April 6. For more information and to purchase tickets, head to www.hennepintheatretrust.org.